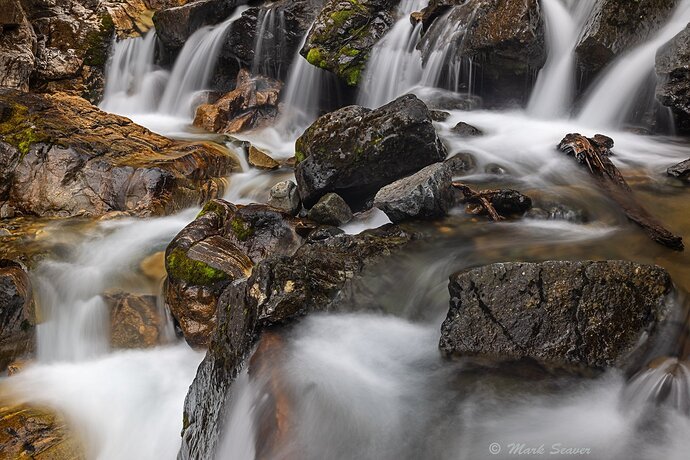 Terrific intimate water scape, Mark. Some might want a bit more detail in the white water, but I think your shutter speed gives the whole scene a bit of a calming feel to it. Nice one indeed.

Nicely seen and composed image, Mark. I personally like a little bit more texture in water but this one actually works nicely for me. The mix of dark boulders on the right side of the image and the orange/red boulders on the left side of the image is a very nice contrast. I also love the striations going through some of those lighter colored rocks particularly the rock just left of the center of the image. One tiny little nit would be the bright spot on the top of the very dark rock just below the top of the frame in the ULC about 1/3 of the way in. I would burn that down so it doesn’t draw the eye.

This image has a lot going for it. The texture of the rocks is just wonderful in that you can feel the slickness of those rocks. Ultimately, however, it doesn’t work for me. The fact that everything is tack sharp and there is no point of focus makes the eye shift from rock to rock without stopping. The center left dark rock appears to be the main focus but the brown crocodile rock is equally dominant due to it’s stronger color. There is some rhythm above with the repeating cascades though. 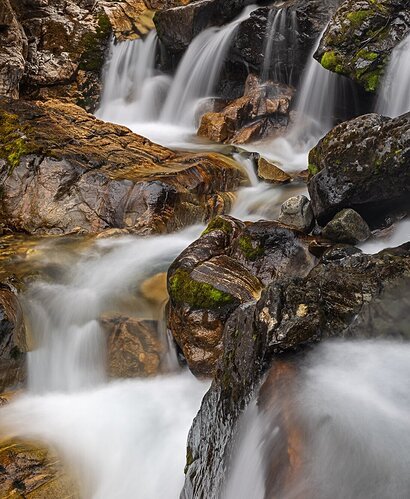 Definitely a lot going on and a lot to view - but I’m thoroughly enjoying this. I love all the sharp details as there is something to enjoy edge to edge, corner to corner.

Before reading any comments I was thinking it would be difficult to find a clean crop. I do think Igor found one and I like that - Alternatively, the right half is an alternate crop as well.

In the end, I really like this one as presented. The processing, colors, contrast all look spot on to me.

If I had a wish, it would be for bit more texture/detail in the water in the LLC. But not a big deal.

I love the silky water texture in the upper 2/3 of your image Mark and the superb detail you captured in the rock and lichen. Only suggestion is to burn down the cascade in the lower left to make it less bright.