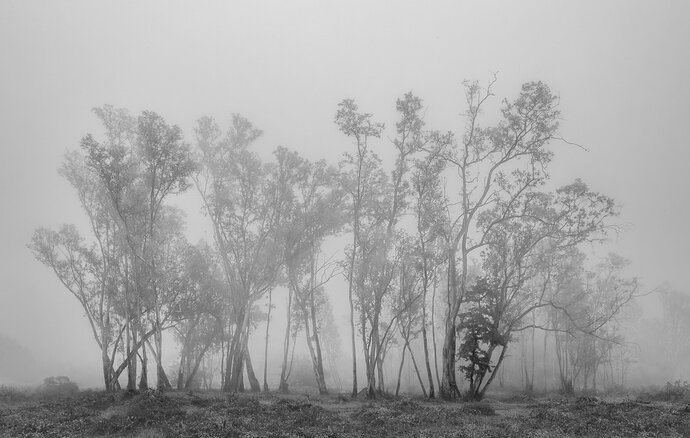 This is from 3 years ago, just now re-worked. Colors were boring and tonalities needed a bit of a tweak, which I can now do better with the TK panels. A vacant property near the edge of town. It had been cleared of undergrowth and by now has probably sprouted low-rent housing.

Intriguing. Eucalyptus. I had no idea it was present in California. At least I don’t think I did. I forget a lot of stuff. LOL.

I like it, but wonder about the intense black of that one bit of tree. I keep looking at it. Do you want me to? Why? The bent branch reaching out to the right is nice. Did you originally compose this centered, or crop it that way? The cut down undergrowth sure does set the stage. It feels as though the sun will break out at any moment.

Thanks, @Kris_Smith! Eucs (the commonly-called “Blue Gum” variety) were imported here from Australia and grown for several uses, and now they are almost weeds, along the cooler coastal regions from here to Santa Barbara at least. 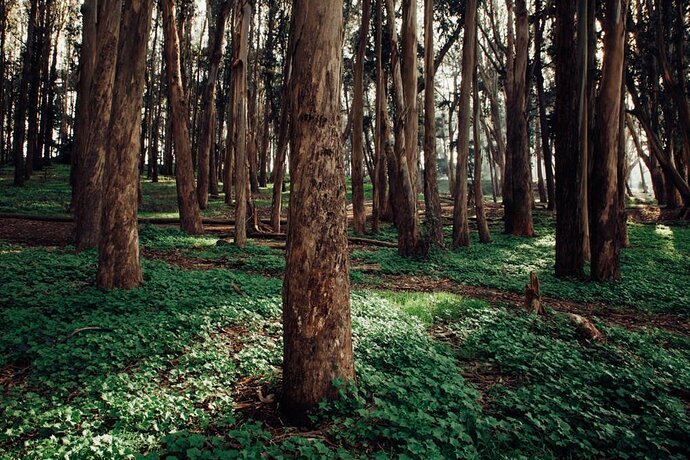 Depending on whom you ask, eucalyptus trees are either an icon in California or a fire-prone scourge. 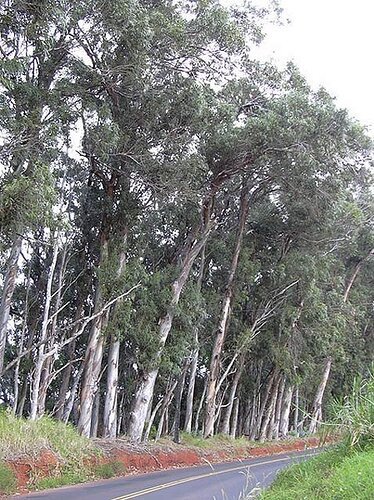 How the Eucalyptus Came to California - The Santa Barbara Independent

A cautionary tale of how the eucalyptus came to be embedded in the California landscape, and its subtle effects.

That little dark tree was what attracted my eye to the composition and the surrounding trees were serendipity. I like the way it stood out as a sort of CBT among the bigger ones. I’d crop out the left half if I could find a cleaner edge. Hmmm… might increase the fog there a little.

Composition is about full frame with some lens distortion correction on the left. I emphasized contrast a bit in a tree toward the UL to try to balance the dark one a bit.

The sun did break out, very shortly after this, and I was NOT through playing.

I am really enjoying the softness of tonalities in this image. The composition seems perfect.

I also wondered about that darker, smaller tree and knew you would have processed it like that for a reason. It is beautifully balanced by the darker left side. I would never think to do that!

Ah. Gum trees; they tug at my heart. Beautiful, magestic and a home for many. I know not everyone will share my view. I must admit I didn’t know they had become such a pest over there. I noted that your weed species is Eucalyptus globulus. This is certainly a tree with a massive oil content in the form of leaves in the canopy that explode in bush fires. They are also responsible for the gorgeous blue haze over our mountains. Our (Queensland) blue gums are Eucalyptus tereticornis and are nowhere near as volatile. Thanks for sharing those links, Diane.

…od out as a sort of CBT among the bigger ones. I’d crop out the left half if I could find a cleaner edge. Hmmm… might increase the fog there a little.Composition is about full frame with some lens distortion correction on the left. I emphasized contrast a bit in a tree toward the UL to try to balance the dark one a bit.The sun did break out, very shortly after this, and I was NOT through playing.

We had numerous Eucalyptus groves near where I lived in Half Moon Bay. One thing I didn’t like about them was that they never fostered the growth of mushrooms. I’ve never seen a mushroom at the base of the trees. Two things actually. Poison oak seems to love these trees. You will almost always see poison oak growing up the sides of each tree.

If the local gum tree was the blue gum then the ones in Santa Barbara and San Diego must be a different species. Those are truly beautiful trees with exotically curved bare trunks that reach upwards. But the trunk of the blue gum is also very beautiful and is great for abstract compositions.

The most noticeable stand of gum trees are probably along highway 101 between Salinas and King City. There finally seems to be something that’s destroying them. There are unsightly gaps in the rows as the mighty trees have become sick and crashed to earth. The overall impression is one of a row of teeth with gaps where some were pulled. I’m pretty sure they were planted there to keep the winds from blowing off the topsoil.

PS. Gum trees are very common in Peru as well. My wife’s brother supposedly cured his asthma by boiling these leaves and inhaling the vapor created in the process. He would lean over the bowl with a towel draped from his head and inhale. Peruvians believe the leaves have medicinal properties. So there’s that.

Thanks, @glennie! Good to know there is a less volatile species. Oddly, the population here doesn’t seem to have been a significant factor in our fires. With the long-term drought, EVERYTHING has burned, fueled by chapparal. At least the native redwood and oaks have some resilience.

I’m now wondering if our eucs harbor animal life. I’ve not heard about it but know where to check… I’m still laughing about our younger daughter’s comment, when they lived in an older suburb of Los Angeles, about the glorious, huge palm tree next door. I was admiring it when she said there were 27 raccoons and 3 possums living in it.

@Igor_Doncov, I haven’t driven that road and didn’t realize that, but that’s an interesting thing worth checking out. There are two groves of giants along a windy stretch of Highway 1 just north of Bolinas that are being removed – not sure why. They were cut on Angel Island, in SF Bay, some years ago, for native restoration.

There is a different species common around Los Angeles, with almost white bark and gracefully curved trunks. (A few around here too, obviously planted.) I always meant to photograph them more seriously and then the kids bailed out and moved up north on short notice.

There is a lovely pungent aroma in the groves, a little like camphor, so it could be medicinal. @glennie – information from Down Under???

We lived in Australia when I was a boy and we found them quite beautiful. One thing about their forests is that they feel light and airy. A ‘normal’ forest is quite dark and mysterious to those within. A Eucalyptus forest doesn’t convey the same feeling.

Beautiful, dreamy and almost eerie image of this grove. I like this quite a lot. No suggestions here.

Beautiful composition Diane. The darker trunk structure on the left side of the grove balances nicely with the dark structure on the right edge. There are lots of gum trees in Los Angeles and there have a really beautiful structure to them. They have beautiful trunks and a really nice canopy. They might be lemon gum? Not sure but there are several varietals of gums in LA and southern California.

This works well as a B&W. The mystery and coolness of the fog comes through nicely.