I just thought I’d post this today to lift your spirits a bit.

For some reason this makes me think of an Ingmar Bergman film (I love his work). In fact I thought of titleing it “The Seventh Seal” but, alas, no chess player.

I’m here in California’s Redwood State Park to shoot redwoods in the fog, except … there is no fog. I drove past this beach with driftwood several times without any interest whatsoever. I finally got out and took a short walk. This spoke to me immediately. Went back to the truck and the rest is history. The trick was to darken the sand to make the logs stand out more.

One of the benefits of photography is that you learn to understand and appreciate art which you may never do otherwise. I used to hate modern art. Like many, I didn’t think it was art. But after working with compositions I began to understand abstract art and it’s beauty. How many of us are turned off by Diane Arbus’ work? I was. But now I get it. Taking pictures like this makes me understand her work. 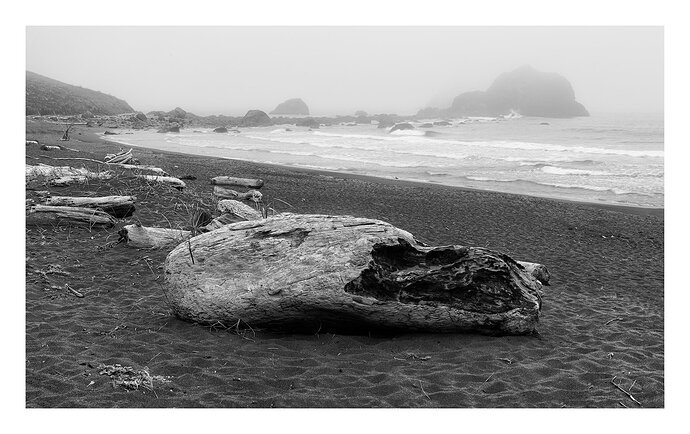 PS. The fog did finally roll in and I got some good stuff with redwoods.

Interesting scene and awesome atmosphere, but I feel like the other piece of driftwood are so close and overlapping with the main one that they are distracting me from enjoying it. Maybe you could clone a few out. I would just like to see this kind of scene more simple and clean rather than messy and chaotic with that mood you’ve portrayed.

I like this quite a bit. It has a great desolate feel. No suggestions here, most enjoyable viewing.

You are ahead of me. I can’t stand modern art. I don’t get it at all.

I like the light and the B&W treatment, but the foreground looks a bit chaotic. I think the top half creates a sense off moody peacefulness, which is nice, but the bottom half doesn’t echo this. Having just one element here, like an off-center piece of wood or maybe even the textured sand would create a more coherent composition.

The contrast of elements in this scene is interesting and intriguing. I want to relate the foreground driftwood bits to the distant mountains. Their tonal contrast creates an interesting juxtaposition. As I study this image, and perhaps I’m complicating it in my mind. the driftwood pieces create a virtual leading line that exits the frame mid left and their brightness pulls my eye away from connecting foreground and background. If camera position would allow retaining those elements, and simplifying them as Tony suggests, it might hold together a bit better.

Glad you stopped Igor. This is one of those shots I stop to study and the longer I look the more I get from it

I agree with your comment and find myself in somewhat similar shoes. Looking forward to the redwood shots. Cheers

I love this, Igor. Yes, the foreground is a bit messy, but it doesn’t say chaos to me. The logs are more or less arranged in a line by the waves, which the edge of the surf mimics. My eye then follows the surf line to that foggy headland in the distance, the shape of which mimics your foreground log. Nicely seen.

And I’m glad you got some fog. We’re on the Mendocino coast right now, and it’s sunny and 70 degrees.

Igor, I love the log, and the foggy seastack, they make for a compelling combination in B&W. That big log is awesome in B&W. At first glance I thought the beach had too much debris to the left. But then I read @Bonnie_Lampley comment about the logs having more structure and flow than I thought, and I agree with her take on it. Just to test it out, I downloaded this and cloned away some of the logs to the left, and concluded that this “cleaner” beach was too antiseptic looking, and not as interesting as presented.

Great atmosphere and I’m not troubled by a “messy foreground”. I think BW works well to set the mood. Processing looks good but I would burn down those bright timbers where they are exiting the left side frame edge.

@Dave_Dillemuth, @Ed_McGuirk. I’m so glad the tide has turned with respect to the background logs. Although, I agree that the one peaking out on the right is a problem. As the topic poster I feel that you should accept critiques as they come and not argue the point. So, I patiently waited to see if there would appear a counter current of comments (notice how I’m using words that tie with the theme).

I did go back and reshoot this subject again after reading the comments. Shooting from a low angle eliminated the close logs. It’s a different approach in that it’s more of a portrait of this log. Alas the fog was much diminished. I even went back today but again, there was a lack of sufficient fog.

I’ve grown attached to this image. I think it’s the best thing I’ve done in 6 months (which isn’t saying much really).

Oh, and darkening the sand of the beach made a big difference too, which I didn’t mention before. In fact that may suggest a compromise approach. Leave the left side logs in place, but burn them down a little bit to draw more focus to the big log.

Wonderfully moody, Igor. I think your processing was quite successful in achieving the mood you wanted. I think the BG logs, etc. are wonderful myself; they are an important part of the story IMHO. My only nit (small) is the little pile of stuff (whatever it is) in the left FG. It’s not a big nit but it does tend to attract my eye more than it should. As far as Diane Arbus & modern art goes, I don’t get it or like it myself, but to each their own.