David Schoen and I were at Ridgefield NWR yesterday and the fog didn’t ever completely lift. This was on our first trip around the driving loop when the fog was quite thick. I was surprised at the amount of tonal variation there was in the white plumage of the Great Egret even with the muting of the fog. I did enhance it very slightly in processing, but I decided not to use any de-hazing on this one.

Thanks for letting me go first, David. 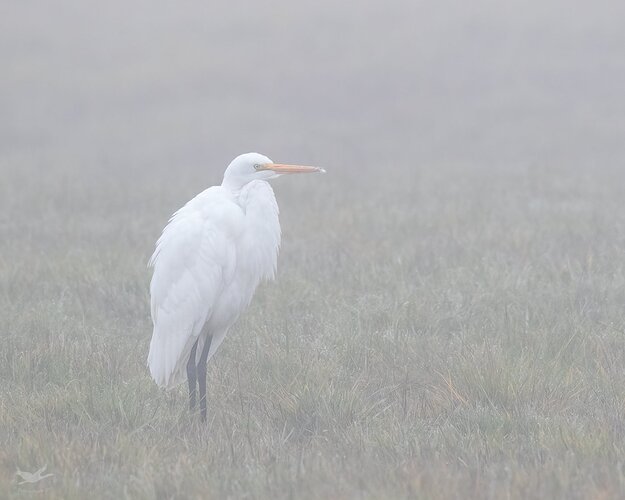 There’s a certain foggy theme to your most recent jaunt! Love this one, as I’m a big fan of fog. The white on white really does it for me. Only regret about being in Florida right now is the unusual appearance of a great egret on Kodiak back home. Warm year with no snow, but I have visions of a white egret on white snow.

I love fog too and this one looks great!

Dennis, this is a fine, somewhat high-key look at this egret. The details in it’s plumage look great in the larger view.

This looks really nice in the larger view. Nice detail on the bird and fade to total fog in the background makes me feel like I’m there.

This is really excellent. The colors and the haziness are just perfect. A really nice mood.

Dennis, this is a wonderful take on this egret. The fog and soft lighting just makes this such a pleasing scene. The egret has a very noble pose in this damp air too…

Very nice foggy Egret photo, Dennis! Nice job on the exposure with very good detail in the white feathers. I think it was a good choice to not use de-hazing or increase the contrast. It would have shown more fine detail but would have lost the mood of the scene. The large version puts you right there with the bird and allows you see the a lot of fine detail despite the foggy haze.

You nailed this one, Dennis. The details in the egret’s white plumage is fantastic and I love the atmospherics with the fog. This is a beauty.