Sony A77
Sony DT 16-50 f2.8 @ 50mm, CPL
ISO 100, 1/320 @ f8
We spent Christmas 2014 with our son in Scottsdale and then went on to a whirlwind tour of Zion and Bryce Canyon where we spent the New Year and got a bunch of snowy keepers,some of which I’ll post later in the challenge. On our way home we stopped in Page, Arizona kind of spur of the moment to check on a tour of Antelope Canyon. After spending a frustrating hour or so being hassled by the regulations of the tour companies I decided to say the heck with them and chose instead to just do a drive by of the Grand Canyon the next morning and see what was happening. Well this was happening, one of the heaviest snow storms in the canyon passed through the night before and left a winter wonderland. Apparently since the canyon floor is usually 15-20 degrees warmer than the rim snow rarely accumulates this deep. To make matters even better the storm was breaking leaving behind some nice clouds and shadows. I had zero regrets that we missed out on the slot canyons and the aggravations of the tour companies and thanked God for allowing us to witness this wonderful spectacle. All comments welcome. >=))> 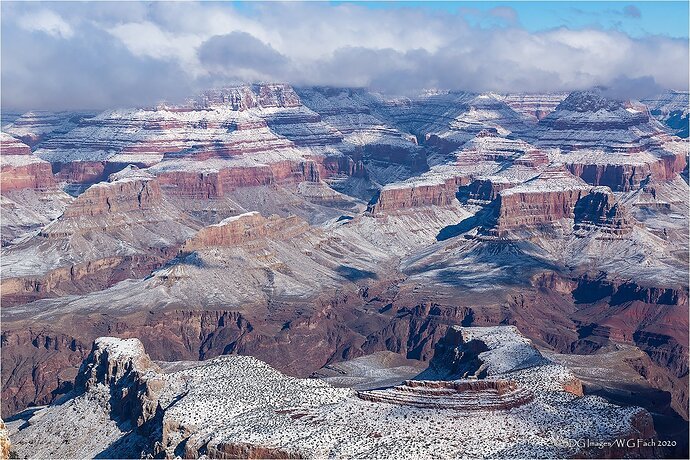 Beautiful conditions yielded a grand scene! The canyon looks great and an excellent entry for the weekly challenge.

Bill, this is absolutely beautiful, and hopefully you have it displayed on a wall some place.

That is one huge canyon vista, Bill! The snow really amplifies the layers in the canyon walls and the dynamic skies tops it all off very nicely. Great job of getting it all in focus!

Bill, an outstanding result after a frustrating start. The layers in the canyon are shown off beautifully by the snow. The layer of clouds and the bit of blue in the upper right add well to the story of the snow storm. Your “journey” sounds like a lot of driving, but it’s a wonderful part of the country.

Such a beautiful vista Bill. I grew up looking at scenes like this in Arizona Highways; I used to really look forward to that magazine arriving as a kid.