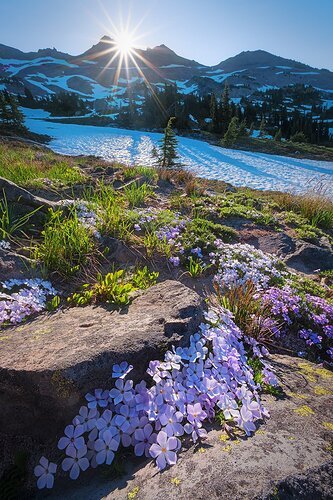 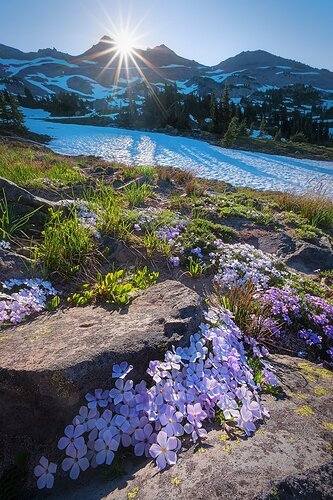 As I noted in my prior post, flowers were sparse when @Steve_Kennedy and I backpacked Goat Rocks this summer. While scouting the day prior though, we found a couple patches of phlox blooming on some rocks; I decided to return for a sunrise shot. There were no clouds in the sky so, like Steve, I decided to catch a sun star when the sun crested Goat Rocks.

I don’t have any specific questions on this one, but would love your thoughts and suggestions!

John, cloudless sunrise is pretty much the norm for us backpacking the Sierra Nevada here and I have tried many things but the bottom line is this is a tough situation. But, I think you have done well given the situation. I really like how the arrangement of the phlox curves and point towards the sunstar and you have positioned the sunstar in a very good position along the crest. The only element that makes me hesitate here is the pine tree in the middle.

John, I agree with Adhika’s comments here 100%. I think you’ve handled this scene about as well as could be. Incidentally, did you shoot the same scene before the sun crested the mountain? I’m curious if softer light would have allowed for more creative decisions during processing. Those flowers make for a stunning foreground element!

John, I am not strong in giving critiques. But I see here a well made composition with a good contrast of winter and spring. I would have been there !

I love it when you can make lemonade with lemons. Not that you weren’t given anything here. You have a wonderful foreground, some nice snowcapped mountains in the background, a terrific sun star, wonderful light, but no clouds. A long way from being a deal breaker for sure. I might crop a little bit off the bottom to remove the lower right portion of the rock that’s falling off the edge and pulls the eye a bit and you might consider removing that leaning tree in the center of the frame but I’m not actually sold on doing that. There’s something about that tree. Not sure what it is. Maybe it’s trying to be the star of the show since the eye goes straight to it and it’s competing with everything else in the image. Probably just confusing the issue now.

My immediate reaction was that this is a type of composition that you strongly favor: flowers in front and mountains further back. The centered tree has received quite a bit of attention. But would the image be better without it. I don’t think it would. It fills an important part of the middle ground without which it would feel a bit barren. So my vote is for the tree.

John,
I immediately recognized this as your work…that is a good thing. I have nothing new to add , but I agree that this is nicely done give the conditions. I also am curious what this scene would look like just before the sun crested the peak.

@Adhika_Lie and @David_Haynes , just for sport I did a quick and dirty edit taking out the tree for comparison. If I truly chased that version, I could get it more natural looking, but hopefully this at least conveys the idea.

When processing, I often find I enjoy little details that might not be as interesting to someone viewing the image as a whole (especially at a smaller size) for the first time. The tree is a good example. I had no choice regarding it for a composition, but actually liked the way the sun was lighting the top of it. My thoughts aligned with @Igor_Doncov 's.

@Sean_Meehan and @Alan_Kreyger I did take others while setting up the shot, but embarrassingly deleted them because I was so in love with the light kissing the flowers like that. For future reference, I’m curious what you would suggest doing with those shadowed images ( or if I had kept them)? Thanks for any suggestions.

Thanks for the repost, I do prefer the original version with the tree.
To your question, I was just curious if the foreground flowers would glow a bit and maybe offer a more subtle pre-sunrise look. I’m not suggesting it would have the impact of this scene, just a different look. It might have been too heavily shaded given the position of the boulder.

I think you’ve found an implied S curve with your composition her John. I think it’s effective although it does take some time for my mind to digest the slope for some reason.

It’s interesting that you didn’t have a strong flower season down in Washington. Up here in BC we had many wild flowers and the mosquitoes that come with them.

John - for me, I think the foreground flowers are exceptional and with a flatter initial version to start with, you might have been able to draw more attention to them with some dodge and burn or a graduated filter, etc. To be fair, this reflects a personal preference I have of not usually shooting into the sun and isn’t really a meaningful critique of the image you posted.

To go against the grain here, I prefer the treeless middle ground version you posted. I think it simplifies the frame overall and I like the conifer shadows on the snow…I think this better unifies the foreground and background. Just my 2 cents.

It’s interesting that you didn’t have a strong flower season down in Washington. Up here in BC we had many wild flowers and the mosquitoes that come with them.

I misled; sorry about that. We had a good flower season, but it was later than I’ve typically experienced. Steve and I were there before they really cranked up this year. Sadly, the mosquitos were doing quite well!

@Alan_Kreyger and @Sean_Meehan thanks for the additional thoughts. I wish I had kept those other images now, to look at with with a different paradigm. In the future, I think I’ll keep all the images until after posting on NPN.

John, this looks like a great sunrise in a lovely location. The transition from flowers in the foreground to snowfield and snowy peaks works well. While there’s a “cleanness” to the version without the tree, the tree adds interest to the midground creating more of a near, middle, far view as opposed to the near, far sense of the redo.