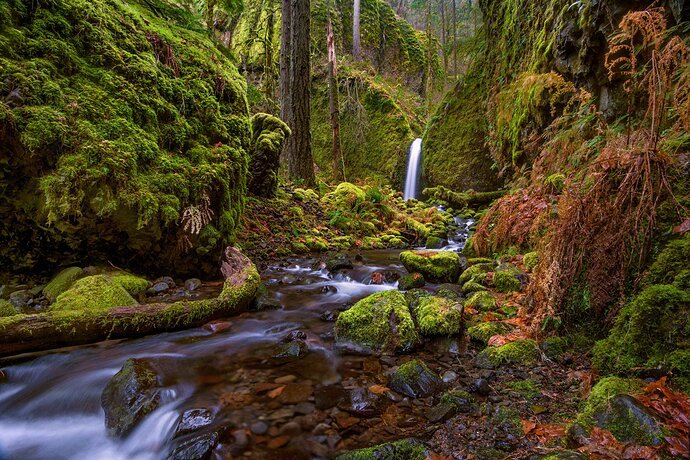 After a limited Columbia Gorge hike today I went to old files to look at what is lost for decades…
This Gorge waterfall (Named Mossy Grotto by photographer Marc Adamus, who made it famous),
It was a hard to get to bushwhack before the huge Gorge fire 4 years ago. The area is closed now since the fire and possibly for decades, totally burned out and dangerous hike.
Famous Elowah falls still closed, also maybe for years. The gorge is very limited.
I took this in late November, the Spring version by Adamus is what most people have seen)
I have been there both seasons, I like winter best.

A lot of people are familiar with the Adamus spring/summer version, any comment on this winter version is appreciated.

I’m not familiar with the other famous view. I’m sure glad you posted your November version. This is just beautiful. I love the composition, drawing me in to the waterfall. The colors and lighting looks really nice as well.
Too bad there’s no more access, but I understand how it needs to heal after the fires.
Thanks for going back into your files and sharing this.

Thanks for posting the backstory. We tend to take these places for granted; like Joni Mitchell sang, “You don’t know what you’ve got 'til it’s gone!” It may just be me but the brown dead cedar(?) on the right provides a nice line gesture back into the interior of the scene but I wonder about getting closer to the green rock in center & eliminating that dead element would therefore bring more emphasis to the lushness of the place. Thanks for posting; beautiful image & location.

Dan, yes, such a shame about the gorge and all that we lost in that fire. I still feel the pain. I like your image here. I never made the trip in to photograph this fall. Too much bushwhacking for this old guy.

I remember the first time I saw Marc’s image from here. I still think his shot is magical, regardless of how much of it was achieved in post. I actually went down there in 2013-14 to make basically this exact composition - the same one Marc did. I even waited in a line of other photographers to take my turn in “the” spot. I feel a bit bad saying it, especially given that I did the same thing, but I do think the photo is less interesting when you’ve seen dozens of copies (of the composition, that is) and know the source of the original. I would like to see who you are as an artist - to see what unique interpretation of your own you could come up with here! That said, I see the value in having a shot that we may not see again in our lifetimes.

I also see the value in a fall shot here, with the reddish ferns. It certainly conveys the season. But I think the positioning of the red feels a bit distracting, which is kind of a result of being locked into “the” composition there. With almost the entire scene being green, having all that red bunched on the right side just sort of becomes a distraction for me. I wish there was more throughout the scene. As it is right now, my inclination would be to shift the reds more toward yellowish-green in hue, but then I know that defeats the purpose of shooting it in November.

I also feel like with the falls being the primary subject, or at the very least the terminus of the composition, the walls around them feel a bit dark. I would probably brighten that area up to help draw the eye to the “payoff” of the composition. There is also a bright area to the left of the big tree trunk up top that I would darken, since it distracts from the falls area and isn’t important enough to be commanding attention.

Lastly, the rapids exiting in the lower left are a bit unfortunate, just because they’re so bright, and then the stream is pretty dark until the next rapids. I’m drawn to the LLC and feel like I don’t have anywhere to go but out that corner. I would probably suggest cropping in from the bottom and left sides to just lose those rapids entirely, since they’d look strange darkened, and then instead dodge up the little bits of white in the stream that would now lead in from the LL.

I hope this doesn’t come off as harsh and that some of it is helpful - I’m just trying to be honest in the spirit of NPN, and to encourage you to be you, so that the world doesn’t miss out on what you have to convey (I also think it’s a lot more satisfying for the photographer to find new things!)

This is a great rendition of Mossy Grotto - way better than any I was able to get in 2015 on my only visit. The water was barely running when I went. Anyways, I like this version - I think it could benefit from a crop though as I’m not sure the red ferns add much. I could be convinced otherwise though!

I think this is a beautiful scene Dan! Even though it’s been shot many times before, I would still be happy with this one. The red ferns are a distraction but I don’t see how you can change that without affecting the fall leaves too.