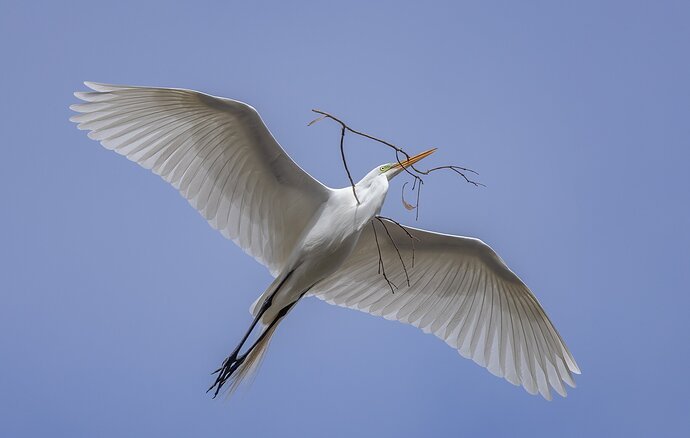 I thought this way of carrying the nest stick was worth posting.

Is this a composite: No
Canon R5, 100-500 at 270, f/8, ISO 800, 1/2000 sec. I was inadvertently in 1.6X crop factor, which I feel has impacted IQ a bit compared to previous outings here in the last couple of weeks. Minimal adjustments in LR, cropped to about 80% of the original pixels. In PS one blemish removed and a slight dark vignette added.

Here is the pose 2 sec later as he is at the nest. (Clearing clouds caused the change in BG.) 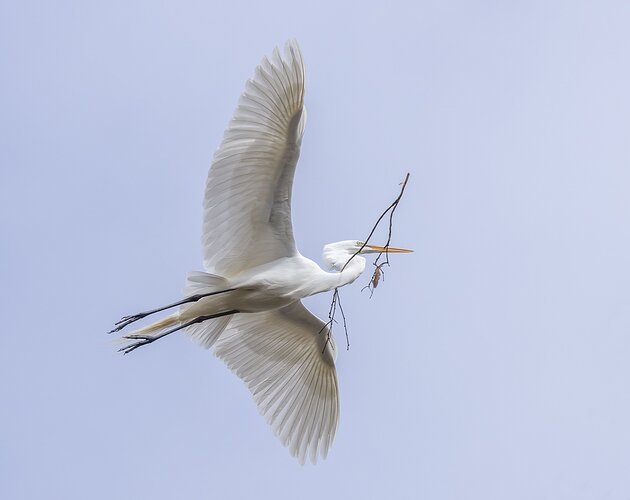 Great captures, Bonnie. Fascinating how this Egret has figured out how to carry such a large twig. the diagonal pose, at least for me, gives the photo energy and purpose. Very nicely seen and captured.

Great shots of this Egret, Diane. I had to take a double take on that first image, as it looked like the stick was going right through him, but then I realized it was over the neck. Nice fine and capture.

I like the first over the second as it has better contrast and a little more pop than the second. Well done…Jim

Diane, this is a fine catch, especially the first one where the bird makes a nice diagonal in the frame. Tis the season to carry sticks, and these two show that well. Fascinating about how it’s got that one limb behind it’s neck.

You really nailed the exposure and focus detail on this one. Well processed. Enjoyable pose and stick in the mouth

Very cool, Diane. It makes me wonder how it was able to flap it’s wings with the stick like that. Excellent technically and a great behavior shot.