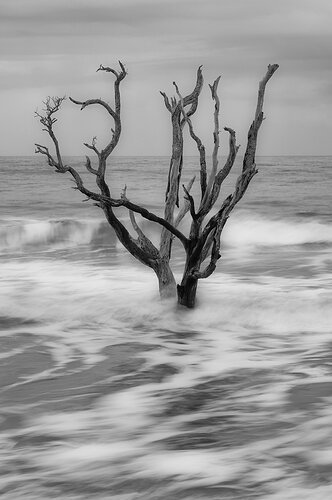 This was taken a few years back while on a trip to the Charleston, SC area. I made the drive to Botony Bay Plantation for sunrise, but that was not happening with the overcast skies. There were several of these trees along the beach which had succumbed to the forces of erosion with the unrelenting waters of the Atlantic Ocean as it slowly removed the shoreline. I converted this to B&W as is just seemed to fit the mood perfectly.

The plantation itself consists of 3363 acres and was a gift from the Margaret Piper family to the SC Department of Natural Resources.

As always thanks for taking a moment to leave a thought.

This is very nice. Those trees sure look good. The B/W works well here.
My only criticism is that my eyes are constantly being drawn toward the white foam from the waves. I would try to darken those, and the rest of the BG also.

Ed,I like these kind of old trees. And you found one in the water. What makes the whole composition rather special to me. And good as it is.
Still I have been so free to make a rework . I did try to bring some more contrast in the water and especially in the white parts . And I took away a small part at the bottom.Using 5:7 ratio.
It is a very small rework, I hope you like it. 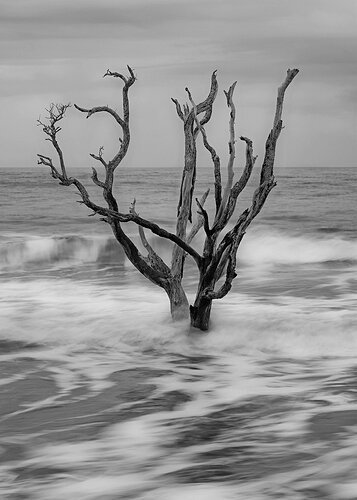 The combination of surf and dead tree has quite an emotional punch. I agree that there does feel as though there is a bit too much fg surf but a crop doesn’t change much in my view. One thing that would have been interesting here would be to use a really long shutter speed and make the tree rise from the mist. I tried to mimic that idea using mostly the clarity slider in the wrong direction. I dehazed the tree as well but you could merge it with the sharp version which might be effective. 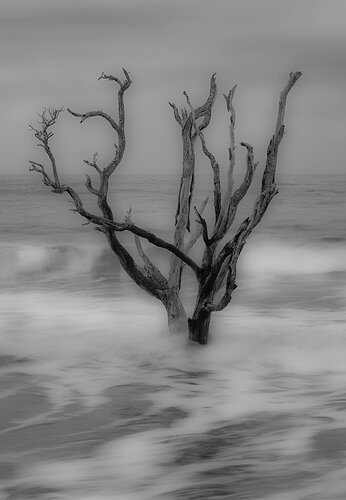 A real nice image with a very stark mood. I agree with Ben about adding some contrast to the water, but no other suggestions. The B&W choice works really well to achieve that forlorn look.

This is an excellent subject for B&W, it makes for a great image. I like the shutter speed used here for the look in the surf, it adds some nice energy to the image. I agree with @Ben_van_der_Sande , a bit more contrast in the water enhances the energy in the surf even further. And adding to the contrast of the dark tones in the water seems to make the tree stand out even more. Good choice to go vertical and 3:2 aspect ratio here. I think this image is a good example of where a 3:2 vertical works well. It’s a combination that often gets maligned here at NPN, but works for me in this situation. The extra reach of the 3:2 does a better job showing the interesting patterns in the surf, which adds to the story for me.

Really like the composition. I do like Igors rework as I think more of a misty sea really helps focus on the tree. Nice image Ben.

Pretty sweet, Ed. I prefer the original aspect ratio. The comp, ss, B&W conversion and processing are all spot on IMHO.

Ed, this is a really nice image. Trees like that are always a good subject, and when placed in water it become even better. Different versions has been proposed by Ben and Igor going in opposite directions. I think it is a good idea to either emphasize or reduce the energy.

Did you try different positions of the horizon? For instance to have more of the tree to stand out against the more calm sky? I have no idea if that would be better, I am just interested in to hear your opinion.