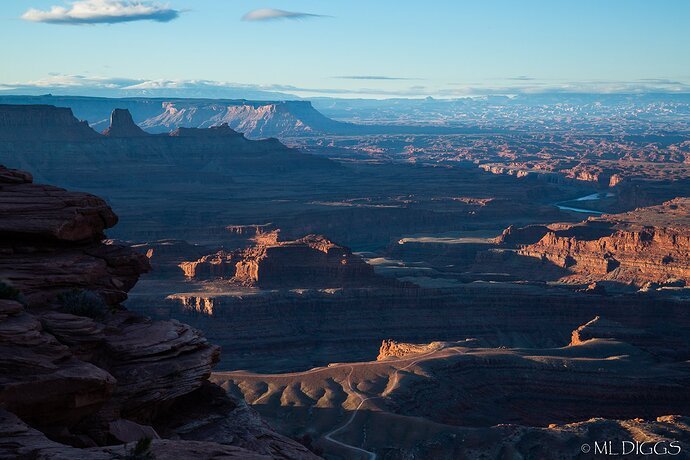 Here is my penultimate image from Canyonlands shared for critique ( I think I have one more). The challenging sky conditions persisted as the morning progressed. I was drawn the to incursions of mesas from the left and the smaller, seemingly infinite structures in the canyon toward what i think is the Maze district. I’m not sure whether the sky kills it, or whether the sliver of river adds or distracts. I feel like the image lacks punch in part due to the sky, but also that bend in the river being across the frame from the other interesting forms.

Does the composition work for pulling you in through the foreground and into the distance?

(If this is a composite, etc. please be honest with your techniques to help others learn)
Single image, but I did clone out a section of road n the bottom third.

I don’t think the sky kills it and the river certainly adds to the image. This composition looks better with the sky than cropped off. One thing I struggle with is how to include clouds in the composition. I often crop parts of them off as you did with the large cloud but I think that’s a mistake. In your case I would try to clone some blue between the big cloud and the frame. Or I would crop below those two clouds to give a blue sky.

Considering how the canyon blues and fades a little with haze and distance Marylynne, the sky is in perfect harmony for me. And I’m perhaps too literal at times, but for me the river is virtually “mandatory” for helping explain all those land forms. I’m taken with this image, and I particularly like how the shadowed foreground harmonizes with the shadows beyond. Based on orientation and geography, I’d say that’s almost certainly the Maze coming in from the right toward the horizon.

You’re making me “homesick” for this area, but we can’t get back till later this fall.

Not only am I enamored with this image like Hank, this image speaks Volumes! What I mean is that not only is this the grandest of landscape views, the story and the expanse of the region is almost mind boggling to me - and you’ve managed to capture and portray that feeling with this image. I don’t know how else to explain my reaction to this. Having never been there, and to get this impression from a tiny little web jpeg, makes this all the more impressive.

Ok, why? One might ask. Well, the light, shadow, ridges, buttes, and yes, the piece of river too, are all working together for an excellent composition and just captures such a grand view. To me though, it is the upper right quadrant, that seemingly ever expanding view that makes me think like this canyon land goes on forever - “to infinity and beyond”. And finally, for my second movie reference, one of the first impressions I had was the final scene from “Raiders of the Lost Ark”. Remember, they roll the crate containing the Ark of the Covenant in to this ginormous warehouse where it appears that the crates of artifacts go on forever… (And for any movie buffs - it was filmed in “Hangar 51”… and yup, of Rozwell fame…) Sorry, I digress.

Like Igor, my only issue is the upper clouds on the edge. I think Igor’s suggestion may be best. OR as referenced inDan Ballard’s recent article, if you could somehow move/lower the cloud without extending the canvas, that could work. A bit beyond my abilities though. But that’s pretty minor as my overall impression is still awe.

Marylynne, this image takes me back to my one visit to this spectacular place. For me this is what I imagine when I think of the southwest and the endless carved canyons that fade beyond sight. The sense of wide open space, and the endless canyons and mesas that the eye can explore is presented beautifully in this scene. I also like the foreground subject as well as the depth of shadow you chose. I do like seeing the river but would opt for cropping out the top two clouds. This is a minor nit for me…Very nice work!!! 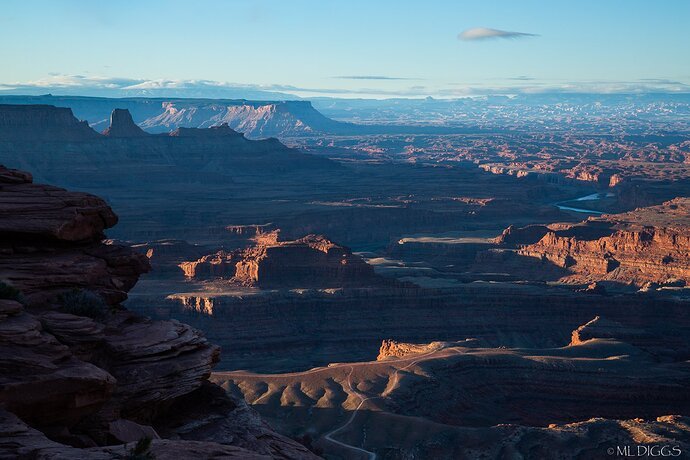 Thank you all for the feedback and encouragement on this one. I did a little creative meteorology on the clouds, eliminating the biggest one and moving the smaller one without changing the amount of sky. I also cloned out a few small, uninteresting rocks catching the light in the nearest couple of hillsides. I think this is better, and I’m still up for more revision if a) the lenticular cloud is now a distraction since it’s just one and b) if you see other things that seem out of place, compositionally unfortunate, etc.
ML

Nice job on the rework. I like that you left the little cloud - without it, you might as well crop the sky further.

Since you posted this one, I thought I would go ahead and post my attempt. It’s very rough, but you’ll get the idea.

I first duplicated the bg layer and using the move tool and keyboard down arrow, moved the bg copy down a bit (making the cloud closer to the horizon; then masked/painted to get the cloud in the new position. I extended the canvas up top for the extra sky. Used the clone/healing brush to fill in sky. that was pretty rough and uneven due to the gradients. I then just picked a medium blue color with the color picker and then painted on a new layer at about 40% opacity to even out the transition areas from the clone. Again, pretty rough. The goal was to gain some space above the cloud. Oh, I also dropped some of the blue from the far reaching canyon shadow areas. 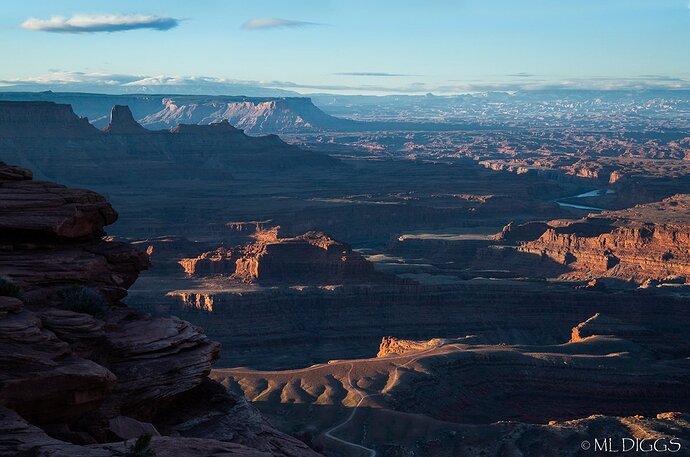 I like your lenticular cloud now and do not find it to be a distraction at all. I think this works better.

I really like your re-edit. One minor thing that catches my eye is the small shrub in the lower left corner. It’s cut off and feels a bit out of place. Perhaps get rid of it?

Otherwise, it’s an amazing shot that would likely look incredible in a large print on a wall!

Thanks everyone. I have retouched the clouds and the shrub in the lower left. I couldn’t do it without y’all.
ML