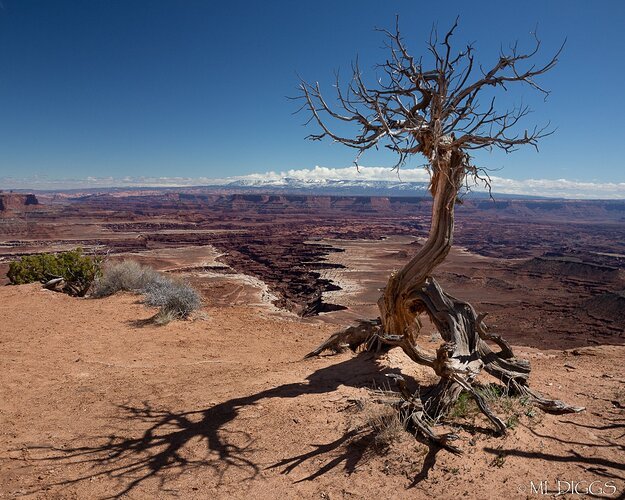 Hi Everyone,
Here is another (the third, I think) imagesmade during my recent trip to the Moab area. In addition to Arches NP, we went to Deadhorse Point and Canyonlands. It’s amazing how difficult it is to photograph these vast mesas and canyons. I’m sharing here one image that felt composed for me, in a way. I was struck by the semblance between the branches of the canyon and those of this twisted ( I think) Juniper. This image was taken in Canyonlands. I’m curious whether you find it interesting and, as always, whether you have suggestions for crops, processesing, etc. I am always open as well to yawns of boredom. That too is good feedback.
ML

I did some slight warping to accentuate the top half of the frame. Let me know if there are unintended consequences for that. Also, I’m noticing some light fall off in the upper left corner, so I’ll see whether that’s from a polarizer (I used one at some point) or processing.

Does it speak to you? Does it make you put things together in your mind: ancient landscape and tree, the ways we grow outward or pull inward, etc.

Single image with some vertical distortion for emphasis. Otherwise, minimal processing in LR

That’s interesting, Marylynne. I’ve taken a number of Buck Canyon images, and for the life of me I cannot remember this tree. Maybe it’s in a different spot than where I’ve been. I’d say this is quite nice and has lots of potential. The canyon is well placed between the plants and tree. I like how the La Sals are capped with a blanket of clouds.

Looks like the light was a little strong, but not a deal breaker. And I think it can probably be tweaked with different options like adjusting shadow/highlights, reducing contrast and such. I particularly think the scene would make for an excellent b&w version.

Hi Bill,
This was near a pullout along the Canyonlands Island in the Sky road. It was on the way back from the end of that road, and on the right. No real hiking involved. Is it Buck Canyon? I did the Buck Canyon Overlook Trail inside DHP State Park, but I didn’t connect that and this location as being different perspectives on the same canyon.

I’ll play around a little more with that like. I think I had a polarizer on and forgot to dial it in properly. Eesh. I’ll give b&w a test drive too.

Thanks for the feedback,
ML

Marilyn, this is a fine image. I think your idea of visual comparison of the tree to the canyon is excellent. If it were me I would bring that to the viewers attention more forcefully by eliminating the left. I don’t feel that getting the entire shadow in the image is that important. I’m assuming that that’s why so much was added to the left of the canyon. 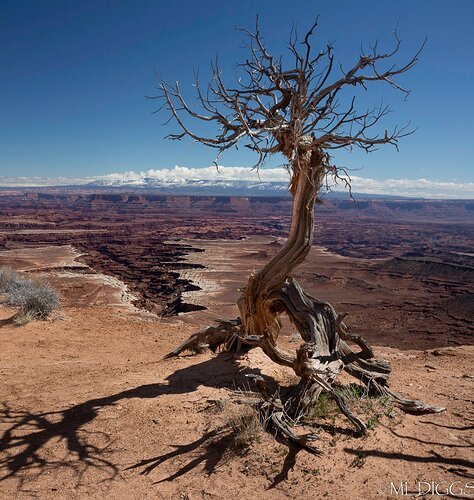 I know that area! I was just there last month. I like the image overall, but here are my thoughts on it:
The tree is is a pretty good spot in terms of composition, but my eye gets stuck there. While the canyon below is spectacular, especially if you’ve been there in person, my eyes don’t really find much else to view in the area. If it were possible, I would have gone further back and used a longer zoom lens to bring the canyon below, the mountains in the distance and the few clouds into a larger part of the photo. I think this would help with the overall composition.

I think this tree is just 50 yards to the left of the tree you shot. It was for my boot sponsor taken on my phone 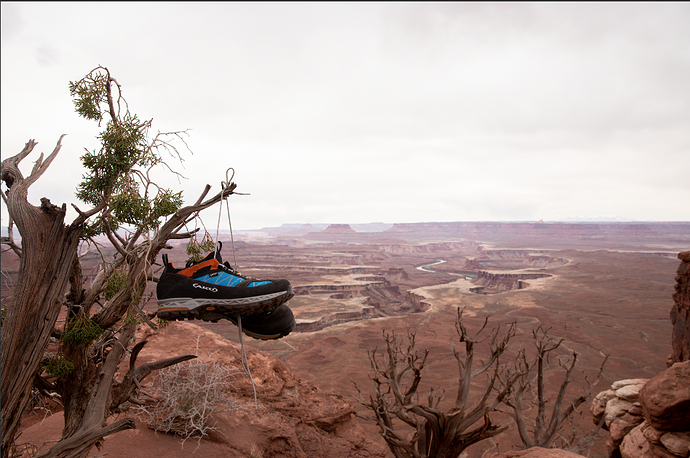 I think you did the best possible given the midday hot lighting. Have you considered b&w? I think the contrast and shadows would work well; but then not sure how the canyon would do. (I played around with it and I think the canyon gets lost, but you could sure emphasize the tree and shadow)

It’s fairly clear you thought the shadow was important, and I think it’s a strong element. I think a crop from the left would work as well, but wouldn’t go as far as Igor (I do think his option is strong.) I think maybe just cropping enough from the left to remove the butte and dark shadow on the left edge. That dark shadow pulls my eye a bit.

I’m also unsure about the vertical warping. I get the intent, but not sure the effect is effective (right use of words?) I also feel like the horizon isn’t level - as a result of the warp? Perhaps leveling would help. Not sure there.

The light fall I think is natural. It’s going to get darker on the left since the source of light is more right? But since you mention it, it’s a little more noticeable…

Thanks, everyone, for the feedback. I am sharing a couple of variations, one cropped more to emphasize the canyon and branches and just a tish of shadow (why have repetition in threes if the frame can’t quite hold it). Also removed the distortion which, while emphasizing the tree, diminished the canyon, which was not my intention. Below I will post black and white, but with SilverEfex slightest hint of sepia to make the heat palpable, hopefully. 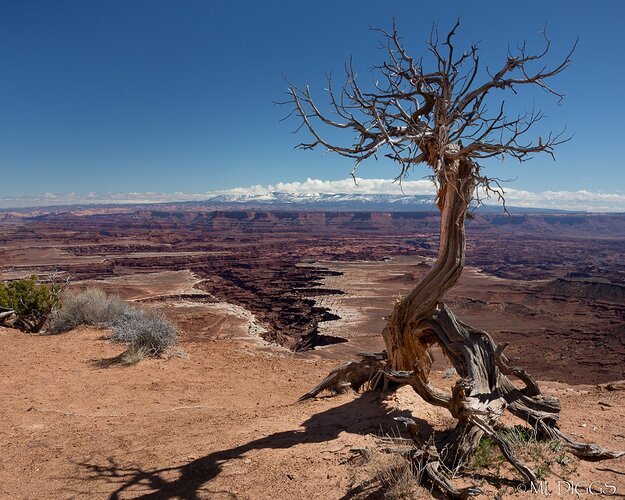 And here is a quick and dirty b/w with a hint of sepia. I’m not sure the tonal range provides as much contrast as the color version, but it has more of a wild west look, for sure. I think I straightened it too, but those clouds and the la Sal range play tricks on my equilibrium. 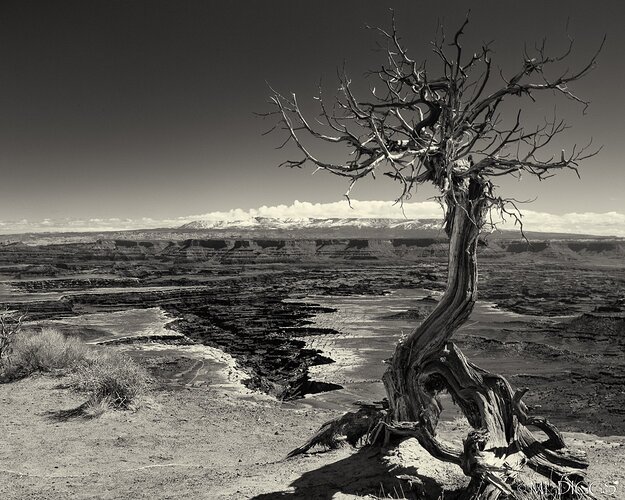 Hi Marylynne - In reviewing this it seems a B&W version works nicely, as it keeps the bright sunlight conditions in check, thereby it tends to simplify the comp. You lost some detail in the clouds, but if you can bring back some of that cloud texture I think the B&W is a great option. And if it were mine, I would go with a B&W of your cropped color option, because that one allows more breathing room for the branches at far right. Just my view, because I personally don’t care for “cramped” edges in compositions.

Thanks, Bill. I’ve recropped it and burned the clouds a bit.