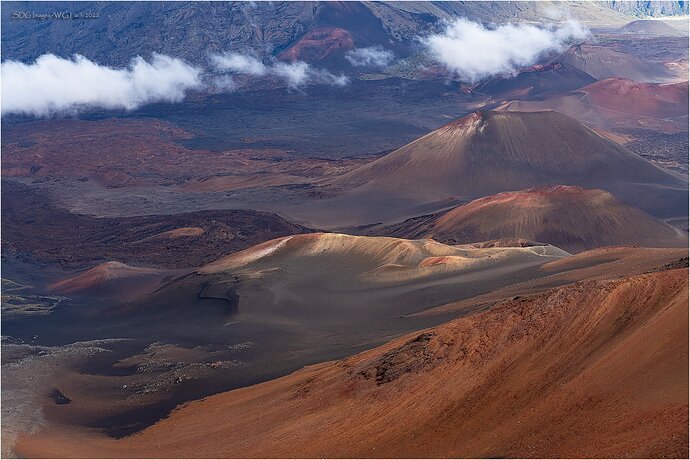 We arrived in Maui on an early morning flight and had several hours to kill before checking into our hotel so Chrissy and I decided to do a scouting trip to the Haleakala summit before my sunrise reservation the following morning. Upon arrival we were treated to a complete spectrum of conditions ranging from bright sun to completely socked in clouds and everything in between. I liked this particular play of light and shadow and the wispy clouds scudding over the crater. All comments welcome. >=))>

Any and all regarding composition and processing.

Stunning, Bill, absolutely stunning! Even though you had a range of lighting, this photo works so well in highlighting the peaks, and valleys of the scene. Hope you have an equally beautiful sunrise tomorrow.

The solitude out there must be as peaceful as it gets. Wonderful scene…Bill…

Bill, another beautiful image from you trip to Hawaii. I love the light in this shot. So glad you decided to go scout it out the day before.

Outstanding, Bill. The whole feel of it is of a world that time forgot. The light and colour palette are exceptional. My only suggestion would be to bring down, I think considerably bring down the brightness in the upper right corner to better match the tonality of the rest of the image. Whereas the rest of the image is dappled light, the URC seems to be direct light.
Just out of interest. I’m assuming this image was taken using a tripod. Did you take a series of shots? The reason I ask is that I’m just now working through Alex Noriega’s tutorial on working with light. He uses as examples, three different kinds of light, one being midday, dappled light (i.e., light breaking through moving cloud cover over a terrain much like this one). One thing he does in many of his images of this sort is to blend in light from four or five images creating a complex patterning of light. For example, the light bathing that central hill in golden light is extraordinary but I’m guessing that a few minutes later, if the clouds were moving, the same effect would be happening in other areas around this unbelievable terrain. If you have other images taken from the same set up, it might be fun to play with blending. But, whether that is possible or even desirable for you, this image is wonderful.

Love this image Bill! So much detail and the colors look great! I would probably darken the URC a little if this was mine. When were you there? I did a quick backpacking trip there about a week ago with some friends.

Glenn: We were there a week ago Saturday (11/19). The sunrise the next morning was spectacular. Still working on those images. Thanks for the compliment. >=))>

Another tremendous image, Bill. I think I like this one even more than the first image. The light is spectacular. I’m really loving the colors as well. I loved what @Kerry_Gordon had to say about possibly blending in different patches of light taken at different times. I’d never thought of that before.

For me, those clouds make the image. They add interest and a nice counterpoint to the reddish colours everywhere else in the image. I agree with Glenn about the URC being a bit too bright. As it is now, it’s leading my eye out of the image but otherwise I think that this is stellar.