Island in the Clouds

This image was made alongside highway 395 outside of Bishop during a really miserable week of bad weather. I was in the middle of a workshop that got pretty badly swamped by rain. Two days in, we didn’t even SEE the eastern Sierra range. While the leader went looking for better weather for shooting, me and a few others decided to just drive around and look for something interesting. We were literally parked on the shoulder and up an embankment shooting at, I think Mt. Tom. I just put on a long lens and shot around, and this was one of several I shot of the hillsides.

The only special precaution I took was grabbing some sunglasses from Rite Aid. The storm was clearing, and snowblindness seemed like a real possibility. The day before: no shooting, down under gore-tex, good Mexican food! 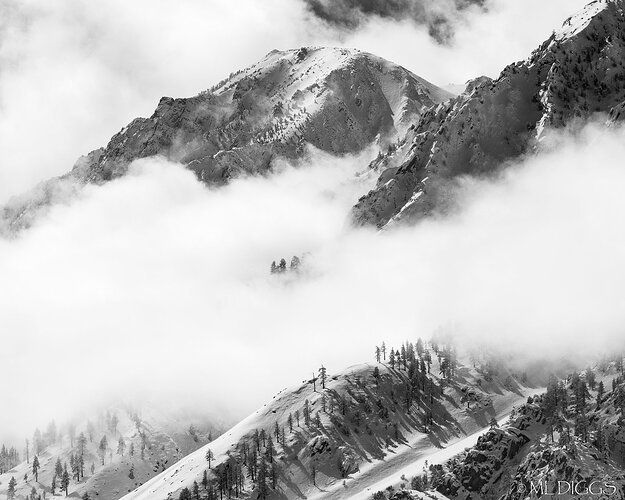 This is a stunning image, with the little group of trees poking out of the clouds in the middle being the icing on the cake. Black and white was a good choice. Very dramatic, very nice tones.

Marylynne, this is a starkly dramatic view with the layers of clouds and bits of sun. I thoroughly enjoy watching these sorts of multilevel cloud days from our MT home and am looking through my files for a capture of this type of weather. Because you posted this as a reply to the topic description, it didn’t show up in the main WC thread. Help from Keith B. and David K. moved it. However, I’ve lost the original title, if you’ll let me know what to say, I can retitle this.

Thanks, Mark. Island in the Clouds is my current title for it. I’ll have to research how to do these Challenges and have them show up right. It’s different from the old site, and with 875 I deleted and reposted.
ML

Marylynne, to post to the main thread click the “New Post or Image” button at the top of the page. I’ve fixed your title. I appreciate you’re willingness to work this out.

Very well layered image of this storm in the Sierra. I like the contrast between the clouds and the mountain. Well composed

Initially was thinking the fog was overwhelming in the center of the frame, but that little island of the mountain in the middle really stands out - for being such a small element.

Top is a little tight, but not a big deal. Awesome image.

Thanks, everyone. Here is a version with a tish more ro0m at the top. 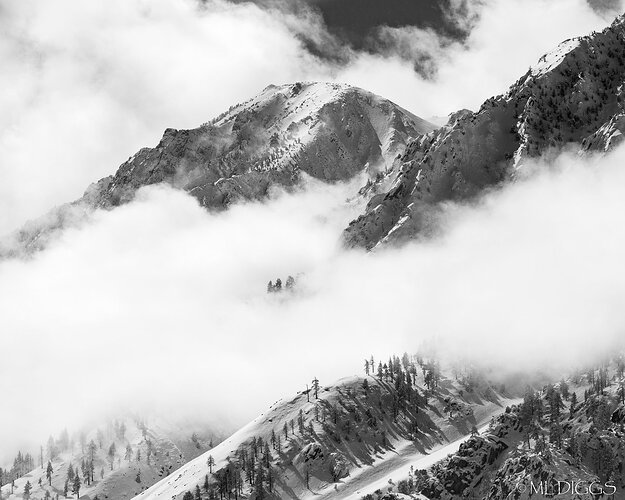