It's all about the light

Been doing some experimental photos in my studio with lighting using this mum (variety - I think -pretty sure it isn’t a daisy). Inspired by @Jim_Zablotny , @Patricia_Brundage, @Bill_Fach , @David_Bostock, @Diane_Miller and many others who have posted exquisite flower images.
I don’t have a lot of sophisticated equipment, I used a flood lamp with an umbrella and colored paper to add a subtle color variation. My goal was to get as much detail in the white petals. 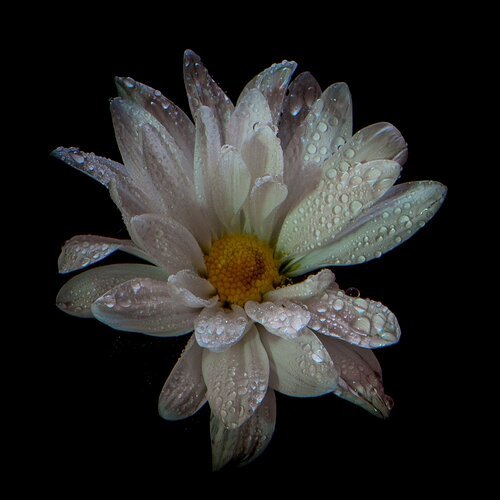 I did crop it quite a bit (down to 5x5), in the original I had included a lot more of the black background. ACR used linear profile w/auto, in PS added brightness/contrast adj layer.
Any thoughts, comments, suggestions would be great. Thanks
Nikon D7200, F/13, 1 sec., iso100 @ 100mm, tripod.

Linda: Really nice subject and a good solid capture. My first impression was that it was significantly underexposed. I did take this into PS and added a curves layer to bring up the mid tones and highlights and I think you could even go further but here’s for your consideration. Back to you. >=))> 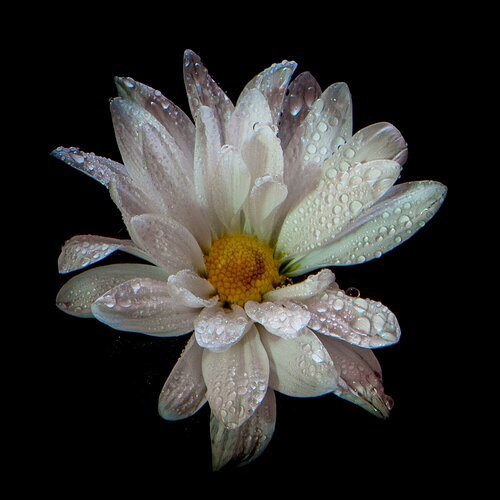 Thanks, @Bill_Fach . I did go back into PS and played with curves which helped a lot. I’m thinking my concern was I would blow out the whites. . . but didn’t. Thanks again.

Hi Linda, you have a very fine composition here. I really like the flower, the petals, and the water droplets. Like @Bill_Fach, I felt it was a bit underexposed. So I took a stab at it as well… 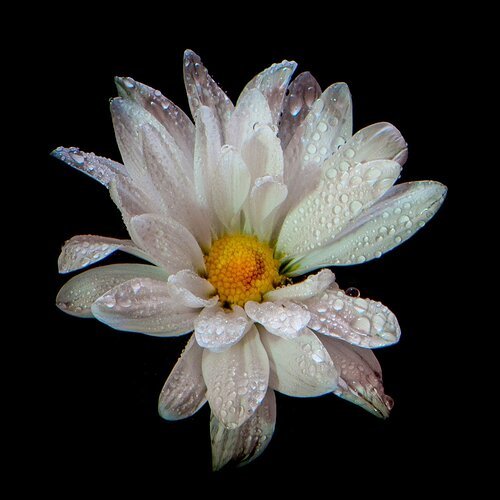 I did a curves adjustment like Bill, then I pulled it into ACR and increased the whites and added a bit of clarity–just a tad. Then I went back to Photoshop and dodged the yellow center to lighten it up a bit.

The one thing I noticed was that the black was just that–full on black, as in 0,0,0. You might be able to go back to the original and increase that a bit…it would probably also increase the over all exposure as well. I couldn’t do that with the jpg…

This image has so much going for it that a bit more processing will really bring it out. I hope to see a repost soon.

Lovely, with nice subtle touches of color. The droplets add a lot. Good suggestions from @Bill_Fach and @David_Bostock.

The Linear profile will most always give a low exposure – it’s suggested to bring it up, and also Vibrance. I usually add a lot of Clarity, too. The nice thing about linear is that you can go further with the sliders than you’re used to.

Linda, this is a really nice image, I really like the flower, the colors and the droplets. Great work in your quickly set up studio! I agree with the others on the exposure.

Great subject and set up with the dark background. Also in agreement with lightening the flower so it shows off those great dew drops. Bill’s rework works for me.

Thank you, @Bill_Fach, @David_Bostock, @Ola_Jovall, @Diane_Miller and @Patricia_Brundage for taking the time to help me out with this photo. I agree it is a bit underexposed and appreciate your thoughts and techniques on how to improve it. Thanks again.