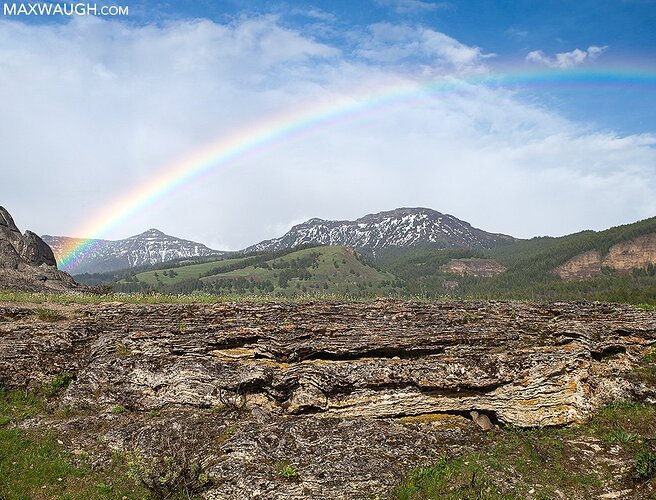 Here’s a shot from my Yellowstone visit last month. We had a rainbow appear in the Lamar Valley and were desperately looking for something to put in the foreground. We eventually made it to the Soda Butte Cone, which gave us something (though with all of the signage, composition options were limited). As I was walking past the edge of this mostly-dormant thermal formation, I spied a Uinta Ground Squirrel peeking out under the shelf. So I snapped a couple shots. It would’ve been nice to include more of the cone (you can see the start of it along the left edge), but some harsh shadows from a rock outcropping proved too distracting. Anyway, I thought we might end up with a bison and a rainbow… I got a rodent instead.

A nice rainbow and little bonus to go with it, Max! A bison would have been even better but sometimes you just have to take what you can get

The only thing I would suggest with this is to crop the bottom up fairly close to the ground squirrel and make a little more of a panorama out of it. With the rainbow pushing the top and extra dead space below the squirrel, it appears a little bottom heavy.

Max, this is good. The travertine ledges and the (decently disguised) ground squirrel are a nice balance to the rainbow and views of the mountains behind. An overall touch of darkening might look good also. I’m surprised that in mid-June Bison in the Lamar were hard to find, but that’s the way wildlife are… Nice job of pulling out something under pressure. Should you get another opportunity, you might think about pulling out where the Lamar and Soda Butte creeks join and “dashing” up the hillside for a view up the Lamar valley with a rainbow. Without being there, I’m having a hard time visualizing the sun angle so my idea might not work.

Good environmental look at this area. Unlike the perfectly placed ground squirrel adding to the compositional components. Nice rainbow. Good sense of place.

Max: I’m not much of a wildlife shooter but I love the Lamar Valley for its understated but often grand vistas. I’ve not worked the Soda Butte area all that much but this is a fine capture. I had to do a little hunting for the ground squirrel but its a nice bonus. Well done. >=))>