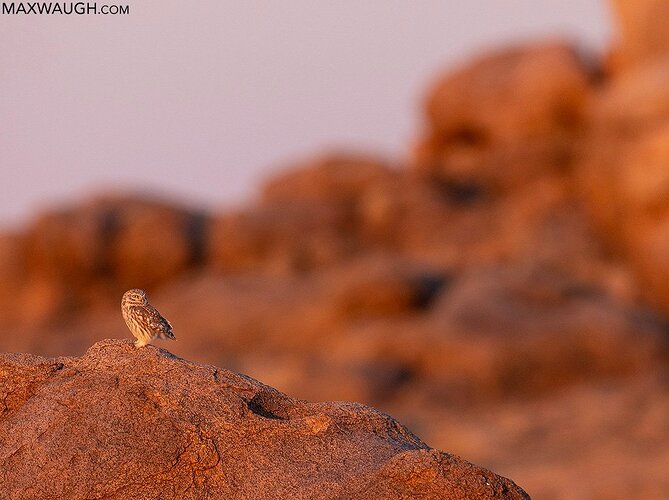 Another of the three new owl species I saw in Mongolia. This one was a nice surprise at the end of the day, in part because the eastern steppe typically has almost no rocks (much less plant life) to speak of. It’s generally barren, but occasionally one can find remote outposts of boulders here and there. This one happened to come with an owl.

Though we so often hope to get closer to achieve more detail, I was pleased to have this more distant view, so I could include more of the picturesque rock formations and give the viewer a better sense of the owl’s diminutive size.

I really like this image, Max. The owl being so small in the scene and looking into the scene is perfect. I don’t mind the large oof are behind either because the slant of the rocks contrasts with the alternative slant of the foreground. Very nice zigzag going on here.

Do you know the species of the owl? Maybe a short-eared or burrowing owl?

Do you know the species of the owl?

David, as mentioned in the title, it is actually known as the Little Owl (Athene noctua), and is found in Eurasia and northern Africa. Size-wise, it’s close to a Burrowing Owl, I’d say, though a bit more robust.

I’m sorry, Max. I did not realize the title was the actual name of the species.

Love this, Max. The placement in the frame and the tiny owl in big rocky area does a great job of emphasizing the owl’s diminutive size. We so often think of owls as large birds, but the tiny ones (like the burrowing species in California deserts) are amazingly expressive.

Nice job with this image.
ML

Very nice image. The color palette is so pleasing. Love the placement of the owl in the frame and the story told by including the environment.

Wow, that’s just awesome, Max - I love the color setting and your choice of keeping the Little Owl small in the frame works excellent. Love it ! Hans