Looking for a Mate

A week ago I was in Grand Teton National Park. There were two moose bulls on Willow Flats. This was the biggest on and got the closest to us. I would like over all feedback on composition and color. Thanks for your feed back. 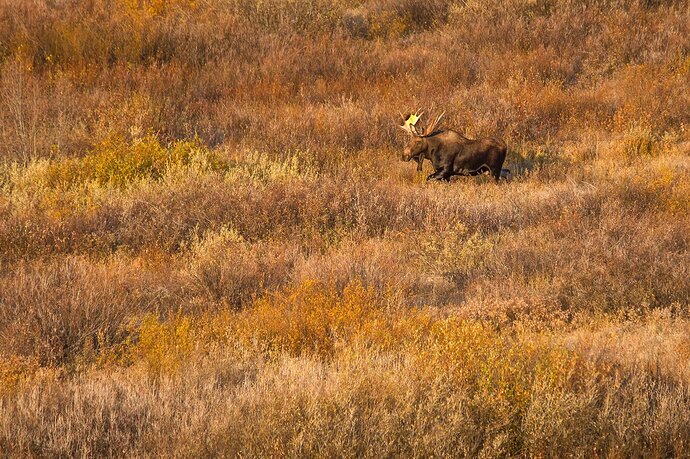 Hi Richard!
Colors look great and framing is a matter of personal choice, but this is fine, as it is.

Nice looking moose. Looks like he is in really good shape.
If you have the resolution, I would like to crop it just a bit more. For me, there’s a fine line between having the environment in the image and having the critter be too small. I want to have the environment show up, and I like having all those bushes in there, and I think the colors are great. I don’t think you need to crop it very much, either, maybe to just below those yellow bushes on the bottom and a little off the top.
Nice image, he’s quite photogenic and you got a nice sharp image of him!

Very nice detail in the moose, Richard. I think I agree with Genny that a bit more of a crop would be nice. I also think the reflection on the far antler is just a little overpowering. It certainly draws my eye to the moose, but it doesn’t let it roam around what’s a largely environmental image and enjoy the subtle shadings in all those fall colors.

I’m kind of caught in the middle with this- I’d either like to see more of the terrain and the moose smaller as a result but in context of a larger scene- or as others have suggested, a tighter crop. It’s a great animal and the light is terrific. I guess what I’m saying is I’d like a bigger view of its home or a closer look at the moose.