Last week I drove to the Rondane NP in Norway to photograph autumn colors. I was accompanied by the first autumn storm, so I had to wait out pretty bad weather. But I had moments of nice light too. It was extremely windy all the time, not making things easier.
One morning I managed to capture the setting full moon, while the sun was about to rise behind me. The light was beautiful, coming from two directions.
I took three exposures (background mountains, landscape with faster shutterspeed due to moving trees and bushes, moon) and combined them for this image.

I am mostly wondering about the luminosity of the scene, and the balance of the light in it?
Also, the colors, with the first touch of pinks in the sky and on the mountains. Are they dialed in naturally? The raw file showed quite some soft pinks, during the blue hour, so there was a delicate line. 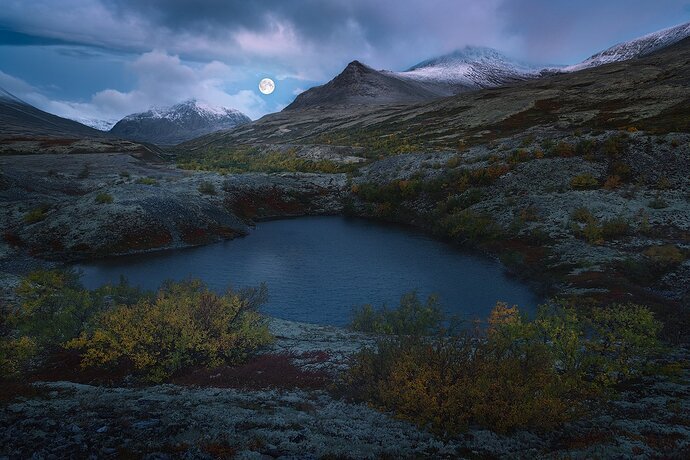 Ron,
I like this quite a bit. Overall luminosity may be a little low for blue hour IMO. The pink looks really good! You nailed it IMO. I think the moon is too bright though. It really causes me to fixate on it. A bit more sky would be to my liking, but it’s a minor nit.

I really like what you came away with here, Ron. The subtle light in the scene is superb and you did a very nice job with the moon; looks very natural. The FG bushes dressed out in their autumn color fills the FG beautifully and the water makes a lovely MG; all topped off with the distant peaks and cloud laden sky. I know you mentioned some soft pinks, but I am not seeing them. I would suggest taking down the blue just a touch and lightening the FG as well. Just my opinion of course.

Your composition is solid. I’ve never been to Norway so I’m not sure about the evening light. But the moonlight looks too bright for where I come from. The landscape looks about right for a early nocturnal scene but the moonlight is a tad too bright. I would darken it a bit and see where that takes you.

Oh and one other suggestion: those bright yellow leaves on the bush on the right seem to be a tad too bright and saturated.

I like this image very much. It’s a fine bit of work.

@bradley @Ed_Lowe @Igor_Doncov Thanks for great input! The brightness of the moon itself! Yes, I see it now! Will play with that and the light around it! And I agree on the bush, I’ll darken it a bit and remove some sat (autumn was like half there, some bushes were still green, others were bright orange already in the whole valley).
Ed, it’s strange you don’t see the subtle pinks, I see them on my calibrated and ‘normal’ screen. Glad Bradley mentions them too, else I would’ve been doubting myself.

They appeared after I toned down the blues in the raw. I knew I saw them on location, but the WB almost removed them all. Pulling down the blues helped to show them. I will play some more with the blues and see what happens in the lighter clouds and with the 2 patches of snow on the right. But they shouldn’t be too strong I think.

This is real nice, Ron. Beautiful and evocative. Framing and processing look good to me. Luminance, colors look very natural… except for the moon. To my eye the moon is too big. Perhaps I’m looking with photographer eyes but I think I’d shrink the moon a bit in size. I think the luminance of the moon is fine - the moon should be very bright in comparison to everything else.

I love the image as presented. I see the subtle pinks you mentioned and they show up nicely on my monitor. I’m going to go against the others and say I don’t feel the moon is too large or too bright. I mean, after all it is fully lit by the sun. Great work.

I love the soft blue hour light here, Ron. I think the overall luminosity may be a bit low to my eye and I like dark images. I also agree with Dave that the moon does look a little large. Small issues on a very nice image, and largely personal opinion.

@Dave_Dillemuth @Michael_Lowe @Gary_Phillips Thanks so much for some more input! It’s great to see what smaller issues others see in an image. Interesting to see the size of the moon being mentioned too, good to consider! Opinions about the luminosity of the moon are spread a bit I see. I find it difficult to choose. I toned down the moon itself a bit yesterday, while playing with the brightness around it too slightly. I liked that result, but will give it a second look! Decisions, decisions

Really nice scene, but the moon does not look natural to my eye. It looks far too large. I quite like the image otherwise.

Ron, getting a good looking full moon over a landscape setting is a major challenge, because of the issues already discussed, brightness and size. The full moon has the same brightness as an over-the-shoulder daylight scene, while the land with the sun almost rising (or setting) is much darker (as your setting show). I think that this view would work well provided you shrink the moon slightly and darken it to tones similar to the surrounding clouds. The details in the landscape and the subtle pinks in the clouds look very good as well as appropriate for the time of day.

@Harley_Goldman @Mark_Seaver Thanks for your comments! I’m glad I uploaded this one, it was a strange light situation. Great to see, fun to catch, difficult to process.

I tweaked more, trying pretty much all suggestions above and ended up with this one now. I think. Maybe.

I’ll have another view tomorrow, haha. 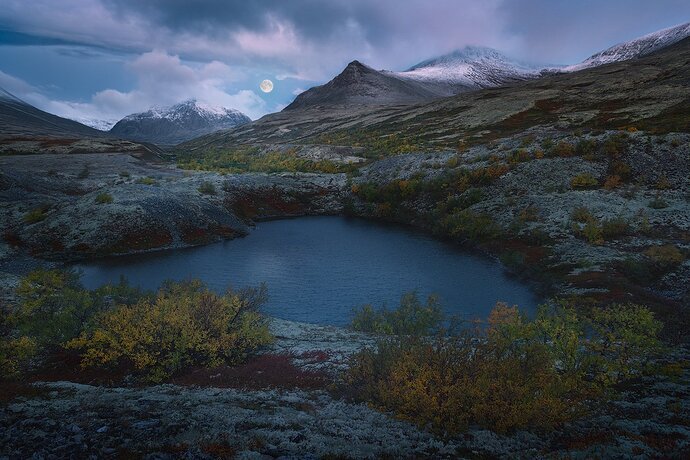 The repost looks good to me, Ron. The moon didn’t strike me as far too big in the first, but I’ve been known to over-reach there myself. In my experience, 15mm more than the fg is about all the zoom the moon can take without beginning to raise eyebrows.
ML

@Marylynne_Diggs Thanks Marylynne, I appreciate it! Putting that number on such a situation for the moon is very interesting and I’ll remember that! Well possible that I ended up about that size or a little below now!

I was going to say that I would prefer it if the moon was a tad smaller but then I saw your repost and I like what you’ve done. It looks really great!

Thanks Tom, I’m happy with the small tweaks that resulted from the input!