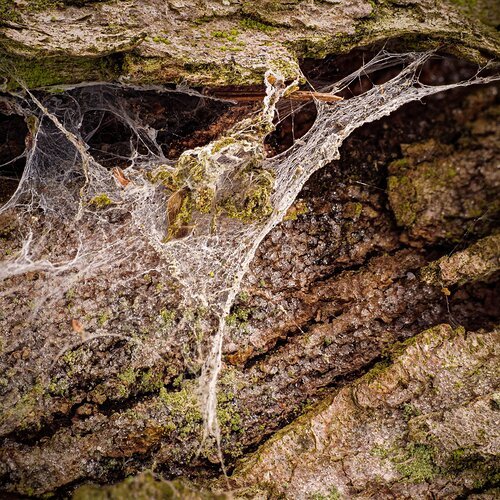 I was snowshoeing one day when I saw a bunch of spider webs strung across big cracks in tree bark. They looked odd and bedraggled and somehow solid in the fact that they were twisted by wind and laden with moss. Many were out of reach, but this one wasn’t and I put the tripod in as good a position as I could and shot a stack.

With a crop and rotation it becomes almost an abstract.

But does it work? I never did get a frame with all of the web in focus so I guess I needed to do a better job there. Too crazy? 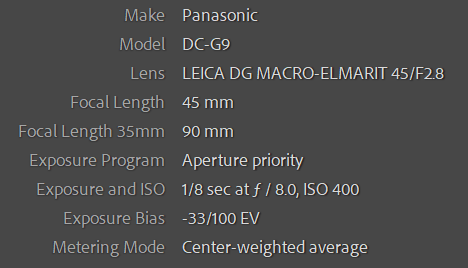 Initial RAW dev in Lr for a curves adjustment and some clarity and texture added and basic sharpness. Zerene for the stack - this is a PMax with a little retouching of the background to make it smoother. Back into Lr for a lot of work separating the web from the bark and moss using a variety of tools - radial filter with intersection of luminosity, brush filter with intersection of luminosity, a vignette too. HSL panel to increase luminance in the yellows, but decrease it in the greens. Square crop and rotation.

Kris, I can see where this would be a difficult shot to accomplish, and I haven’t tried stacking yet. As one who hasn’t got into stacking, I’m not bothered that everything isn’t sharp in focus. I think you did a really great job at capturing most of the web in focus, with nice details in the bark as well. I like the shape of the web, and the lines and texture of the bark and moss in the web. It looks 3D the way you separated the web/moss from the bark. Great job!

Kris you definitely find some original subjects to shoot. I would never have thought to shoot this. I like the comp especially. I did notice the bottom center web part out of focus. Personally, I’d rather see that in focus, but it’s not a deal breaker. Nice work on the stacking. I wonder what this would look like in B&W…Great image.

Thanks @Shirley_Freeman & @David_Bostock - it’s a weird one, I know, but sometimes odd things catch my eye and work. Next try I’ll check the nearest bit more carefully.

An intriguing find, and a difficult subject which you captured very well. I always try to imaging what sort of tiny home is down the hole. This one looks like quite an interesting warren.

I’ve tried to shoot many webs like this and think every one wound up in the trash. The stack looks great except for missing the nearest parts. With BBF, I can back off the focus a bit to start, and with no AF on the shutter button it will just march right through the stack, leaving me to delete on both ends.

I set up a ruler and did some tests at a few of different f/stops and intervals and got a good idea what to set for different sized subjects.

Thanks @Diane_Miller - yeah, I should have checked this out more thoroughly. I blame the fact that I’d been out for a few hours and my toes were starting to disappear. Maybe today I’ll do better.