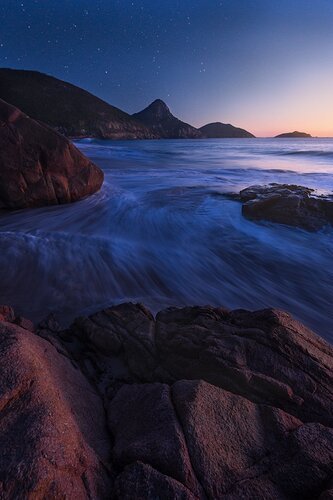 Been working on this shot for a little bit & I’m at the point where I’d really love some feedback.

The idea was to shoot something that showed the transition between night & the sunrise.
The composition uses the rocks in the foreground/left & right as well as the movement of the water to lead the eye directly up to the pointy mountain/rock

I’d love to know if the composition works & if there’s anything I can do to help make the scene a little bit more dramatic. Recently I’ve been trying to bring down the lightness of my images to give it more mood, however, I don’t know if maybe I’ve gone too far in this case?

How does the colour combo work?

Two shots, one for the sunrise/foreground & another earlier in the night for the stars blended together in photoshop + camera raw for dodging & burning

I think this is a great image that accomplishes your goal of showing the transition between night and sunrise. Because it doesn’t feel like a particularly dramatic scene to me, I wouldn’t worry about trying to force more drama into it - embrace the peacefulness of the transition to daylight!

Overall, the colors are good and the composition is simple and effective. I might play around with cropping a bit off the bottom, but there’s nothing wrong with it as is here.

There are probably a few minor tonality tweaks I would make:

Really cool idea here! Not sure if there is a way to do it and keep it natural, but the rocks in the foreground are really warm which I liked. The rock on the right in the mid-ground comes off as super cool though, I wonder if there is a way you could warm up those rocks. The other thing is there is a really bright spot in the water ( just beyond the rock) that I wonder if you could tone down a bit, my eye went there before going to the warm sunrise in the back. Again, this shot is really cool!

I like this as it is. The texture of the water with its semi spiral flow and the stars are excellent features against the red brown rocks which are complemented by the red in the rising sun. Just curious, where is this in Australia?

Hey Larry, thanks for the feedback!