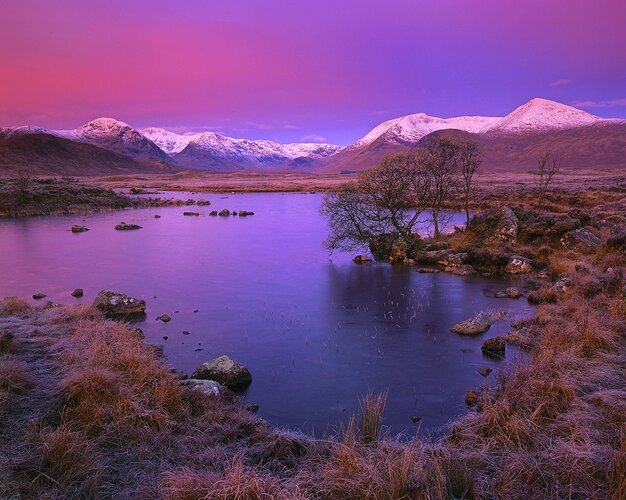 Without a doubt this was the most sumptuous and strikingly coloured autumnal sunrise colours I have seen in a pre-dawn twilight sky over Rannoch moor and believe me I have seen a good few. This one was complete with sparkling morning frost and pinkened snow dusted peaks courtesy of a plum coloured sky. Twas an awesome sight and this was the absolute peak of the soft colourful light.

Yeah Rannoch Mor is stunning. I was out there a few weeks ago before Covid madness hit. I even got some similar colours to you. When I first saw it I thought it may have been the same day

I do quite like the shot but have a few comments.

On the cc side. I like the inclusion of the trees but would like to see them as more of a feature. They seem a bit lost against the brown backdrop.

Having cut the water off on the left is drwaing my eye towards it. I also think that this is because it is catching the pink light which is always going to be more dominant.

I think you have managed to capture the colours and tones well. I assume the quite satuared effect is from using the Velvia film. Saying that the colours are quite nice and certainly reflective of winter sunrises in that neck of the country.

Wow is the first thing. The color, especially the obvious pink, is eye-popping and I have good faith and trust between both you and Eugene for having stood there to witness that you’ve represented the colors very true to the experience. I would add that what keeps it real for me are the whites of the mountains, the frosted grasses and deep blues of the nearer frozen surface.

I hadn’t really thought about but now that Eugene mentioned the water exiting the left, only now do I see that - but honestly not a deal breaker.

If I recall… you’ve presented this scene before - only covered in snow? No doubt only of those places one can return again and again for the different moods, seasons and conditions. Well done.

This is beautiful, Ian. I can see what Eugene and Lon are saying about the water on the left. Not a big deal to me, but I might burn that area a bit and divert attention away from it. No other thoughts here, just enjoying the image.