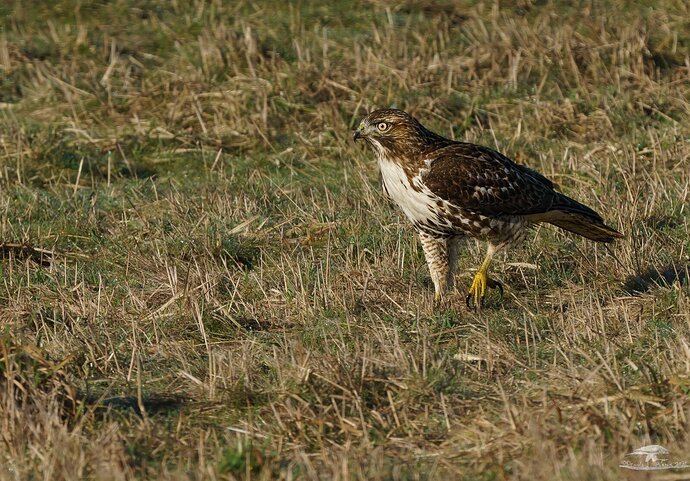 I watched this hawk for quite a while the last time I was at my favorite refuge. It was in a large open field that attracts lots of Harriers, Red-tailed Hawks, Great Blue Herons and other vole and mouse hunters. This bird was behaving oddly for a Red-tailed Hawk. It was wandering around the field on foot with an occasional quick glide, but obviously hunting. Unfortunately, it didn’t catch anything while i was there, but it was interesting to see it hunting from the ground rather than the air.

Does it pop well enough from all that grass stubble?

I debated a little clockwise rotation, but never could make up my mind and there’s really not much in the image to go by.

Nice environmental image. What I’m seeing is one leg appears to be considerably thicker and hairier than the other. I wonder if this had something to do with why it’s walking rather than flying? I think I would like to see a little more separation between the colors of the head in the background. Perhaps darkening the background a little might help.

Interesting behavior. Several times I have seen SE’d owls hunting on the ground but not hawks.
Nice and sharp. I like David’s suggestion of a bit of separation between bg and hawk. I might bring the shadows up a bit on hawk also.