I visited a Southwest Washington NWR on Friday and since the bathrooms are closed, the number of people seemed considerably reduced. The winter birds aren’t there in force yet, but there were still a lot of Red-winged Blackbirds and the males were singing part of the time, though I didn’t catch a good example of that. I liked the teasel perch and the head turn in this image. 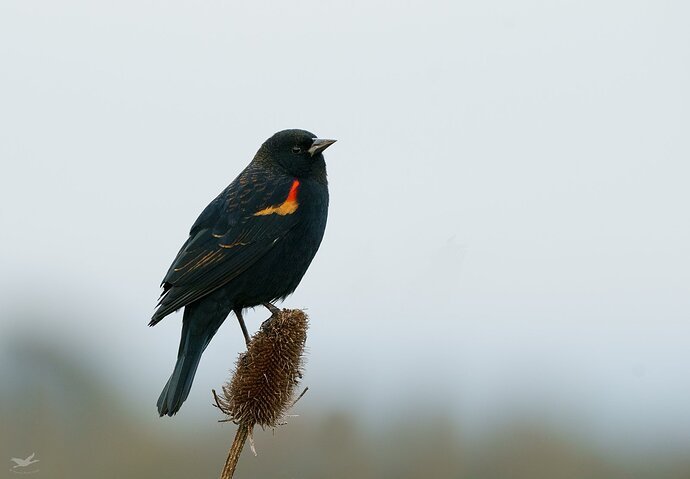 Anything. I removed a few other teasel heads poking into the bottom of the frame.

Anything. I toyed with the idea of going to a vertical presentation, but decided I liked the empty space out front.

Nice catch, with great tonal detail on the wing colors! I’m wondering about a little more shadow detail, but that’s something I tend to overdo. I’m not a fan of negative space but this one works for me, maybe because of the seemingly minor detail that the BG treeline tapers to the right. Why that works, I’ll leave to a visual psychiatrist…

Like Diane, I also wondered about increasing the shadow detail, but in the larger view I think the color detail looks good and the shadowy area is black anyway. I like the perch and pose and think the negative space works well in this photo.

When I was there, a few days before you, most of the redwinged blackbirds were hiding in the brush and they never cooperated by coming out in the open. There were a fair number of them especially females were I was. I tend to agree that the shadow detail could be brought out a bit but then again, I’m looking at this on my laptop. I made three loops of the refuge and saw different things each time. Started out quite foggy but cleared by noon. Diverse species currently there is somewhat limited as you pointed out. But this is a good shot and I like it.

Hi Dennis
I like the framing and the open white back ground. The blacks could come up a little, but in the larger posting the Blackbird’s detail did showed up better.
Peter

Nice one Dennis. I have not noticed the little splashes of color on their backs before. Looks nice. I like the space.