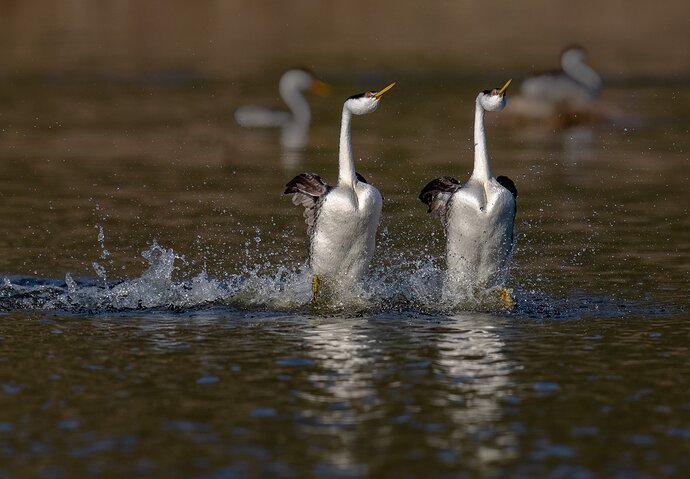 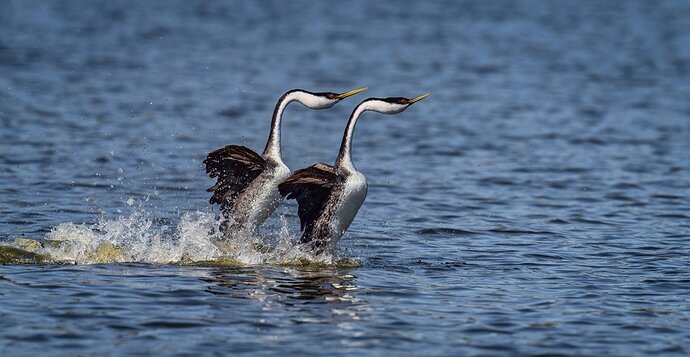 These are Western Grebes. In this image, they are doing their mating ritual. I posted a similar image but of Clark’s Grebes in the weekly challenge section which describes their behavior. This was taken on a reservoir in Southern California. There were probably 50 or 60 pair of both Western and Clarks Grebes. This behavior is called rushing. It is part of their mating ritual where the male and female participate in this action to establish their coupling for future mating. The rushing behavior occurs pretty quickly. The male and female will look at each other with their bodies and heads at water level. That is indication that this rushing behavior is going to take place.

This image was taken from a boat. I like the water color in this image better than the one I prep posted earlier. If you get the opportunity, this is certainly a behavior to see in person.

Beautiful images, both of them. Maybe the pose of the birds is best shown in the second image, but I prefer the first because of the the two other OOF birds in the background. Nice that those two don’t overlap with the primary subject on the foreground. The faint reflection in the water is an extra bonus.

Really nice David. Such a cool behavior and you captured it very nicely. Kudos!

That second shot is so incredible. Wow. I can barely catch a robin in focus on the lawn…kudos for developing this kind of skill.

Really cool capture David! Nice reflection in the water, and good that you can see the one bird on the left looking at the other bird. There is just something about the sound they make when rushing. The little pitter patter of their webbed feet is incredible. I really like the two OOF birds in the background and the sharp water splashes. On a sunny day it’s really hard to capture these birds with dark blacks and the whitest of whites but you did a pretty good job here. Maybe tone those whitest hot spots on the chest down just a touch if possible. Kudos to a great capture.

Excellent, David. I like both shots. Seems a bit ridiculous to go all the way to S. Cal. when we have so many in E. Wash., but take them where you can get them. I’ve always wanted to catch this behavior and never quite timed it right. You did a superb job on both of these images.

What fun behavior to witness, and you nailed both shots. Really nice work.

Really awesome! That must be amazing to see in person! It looks like they’re having a race. I want to see that someday!

Hello, David, great behavioural image - incredible what a show these bird can pull off. Alas, I have only seen them in August, when I assume they’re bored courting

David, these are great captures of some wonderful behavior (which I’ve never witnessed). Really nice to see the details in the larger versions too.

I feel like the composition/crop choices are a bit unbalanced in both images. I’m actually a fan of seeing the occasional “splashline” behind a subject… something emphasizing not just the action, but showing the path the animal has taken and how it’s zooming along, almost out of the frame. I think it’s an effective storytelling device. In this case, however, I think there’s some conflict with this in your compositions.

In the first photo, folks have rightly pointed out the cool birds in the background. That combined with the angle and movement—which is not in profile or moving directly across the screen—leaves me feeling like the left part of the image is practically empty and superfluous. I don’t feel like the splash trail is as important (instead the highlight is the contrast between the glossy foreground birds and the subtle ones in the background), and could be cropped. I might even say the same about the reflection as well… everything is mostly going on in the upper right quadrant of this image.

In the second image, the trailing splash becomes much more effective, but in this case I think maybe there’s too much room ahead of the grebes. Again, it’s a lot of empty space, while everything that draws the eye is in the left half of the image. The splash itself leads the eye in a leftward direction after starting with the birds, so I feel too much emptiness in front (which is sort of the natural choice for profiled subjects under normal circumstances) creates conflict and pulls the eye away. One could alternatively opt to mostly crop out the splash behind and leave that empty water at the front to focus on the directionality of the movement, and it would work fine, but I like your idea of leaving the splashes behind, as it’s an integral part of the behavior depicted here.

Sorry, that’s all very long-winded. Sometimes it’s difficult describing how my eye is traveling through the frame in a succinct manner.

Sorry, that’s all very long-winded. Sometimes it’s difficult describing how my eye is traveling through the frame in a succinct manner

@Max_Waugh @David_Schoen Reading what Max wrote and looking at the images in thar light, I find myself agreeing with him. An excellent eye for composition, Max, and I certainly don’t mind long-winded when it’s that clear and insightful.