Snowy with Catch of the Day 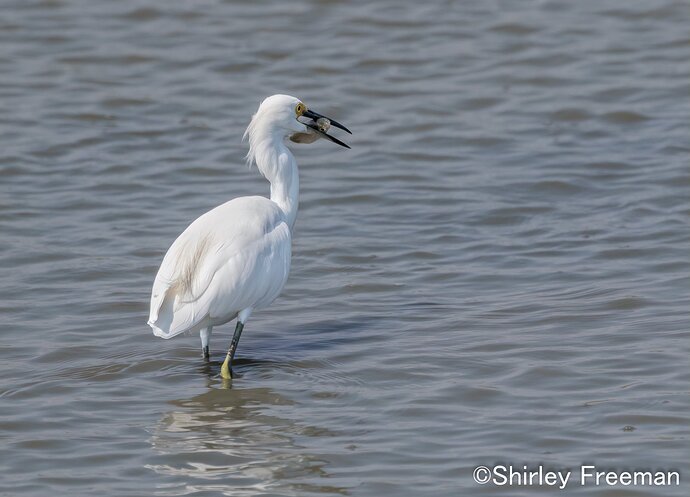 I took this shot at Huntington Beach State Park, Murrels Inlet, SC last year. I liked that the eye of the fish was visible. It was during harsh light in the afternoon, but it was low tide, and the wading birds were enjoying an easy catch. I was too!

Anything that would improve the shot, and for future captures like it in harsh light.

Any suggestions you might have to improve the shot.

Hello, Shirly - as you mention the harsh light: that worked out pretty well. Bird with catch is alway s a big bonus, would have wished for the bird to face you - but that said, a nice image ! Cheers, Hans

Being able to see both eyes, the bird’s and the prey’s. is a plus, Shirley. I, too, wish for the bird to face us.

Anything that would improve the shot, and for future captures like it in harsh light.

I think you have processed the image really well given the harsh light. Being able to shoot at a softer light is always a big plus.

I had a polarizing filter on to help with the harsh light.

I am curious about this. Considering how you have to twist a CPL until you get the maximum effect of polarization, this is not an easy feat. Have you ever compared images with and without a polarizer?

Adhika, thank you for viewing and commenting on this image. The eyes of both was what made this image for me as well. To answer your question about the polarizing filter, I find in harsh light it seems to help, I have even used it along with fill flash when doing functions at church that are outside in harsh light. I just get a bit better photo I think with it. When not including the sky, it isn’t so much to worry with the twisting it, just when I change vertical/horizonal orientation with the camera. I think it is because I am shooting fairly close to the subject, and, like I said, no sky included that it seems to be no issue. Might be someone smarter about that than me that can explain how that works out, but for me, when in harsh light, I try to use the polarizing filter.

You did a really great job with the lighting, Shirley. It doesn’t look as if it were harsh light, though obviously high. The fish eye makes this image for me and it works extremely well with the pose of the Egret.

A nice picture of the Snowy egret with its catch.
If I should suggest any improvements for next time it is to go lower with the camera. If you are on the same level as the bird you will get better contact and the background will be quite different. It will be further away and hence out of focus.
But a nice picture as it is.

It doesn’t look as if it were harsh light, though obviously high.

I think Dennis summed this up really well. Something to experiment for me!

Thank you, Dennis, Lennart and Adhika. Lennart, it was difficult for me to get much lower, as there was an embankment that I was on, looking down. If I was a tad younger, without arthritis in the knees, I might have laid down on the ground and shot, and got a better background. I can do that, but getting up with a load of camera equipment is usually the challenge.

I am glad to hear that my sharing that I use a polarizing filter in harsh light has caused you to consider experimenting with it, Adhika. If I can help anyone by sharing anything that works for me, that really pleases me. We all learn from each other. I know I have learned from others, especially on this site.

Excellent behavior. Agree about the head position. And yes, arthritis certainly makes it more difficult to get low enough. On both of my cameras, using live view isn’t always as effective in achieving critical focus. I am about to opt for a right angle viewfinder. Canon does make one ($200ish) and I saw a third party one made by Ziv on the B&H website for $55. Might be good to try for both of us.

David, I bought one of the Canon right angle viewfinders, and tried it once, and as I remember, it made everything look upside down, and that messed with my head for trying compose an image. I will try to mess with it tomorrow and see. That thing is brand new! I have had it for awhile. Just forgot about it. That might help some, but still have to get down pretty good. Thanks for the idea, and I will try to get back to you on how it worked for me.

Okay, not only do I have arthritis, but evidently a memory problem too! Welcome to being a senior. I just tried out that Canon right angle viewfinder, and it doesn’t make everything upside down. Just wanted to correct that info so it doesn’t cause anyone any confusion, or keep them from buying one if they were considering it. Not sure how I had that one in my head. It does take some getting used to for aiming the lens, and maybe that was what I remembered. Now I will try to put that to some use, as it will put the camera a little bit lower. Thanks for reminding me, David.

I have one of those as well, but I’ve never tried it for bird photography. It might be an interesting approach.