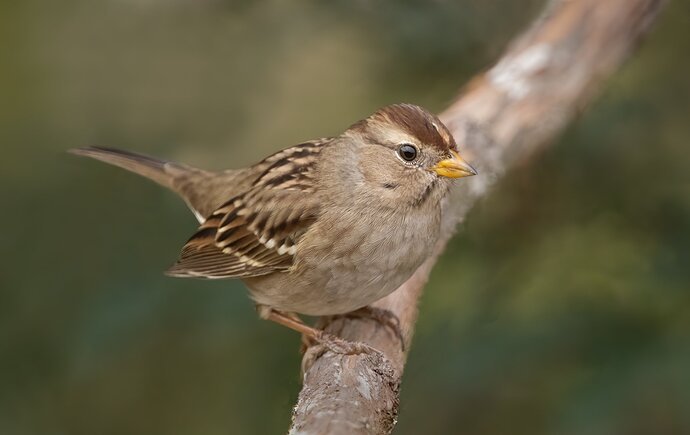 I was testing my Canon EF 400 DO II f/4 + 2X on my new Canon R5 when this little guy volunteered for a quick shot. Wide open at f/8, ISO 6400, 1/1000 sec. I was handholding and guessing at a SS that would give a sharp shot. It’s not the sharpest capture and the noise is pretty high for bringing out detail. Cropped to 40% of the original frame, Topaz DeNoise AI, some BG branches removed. A couple of frames earlier I got a sharper one but not quite such a pleasing pose. I’ll process it similarly and see if the noise is less of a problem with sharper detail.

Can anyone give me an ID? Shot in Santa Rosa, CA, NW of San Francisco.

I think this is a intriguing image with critical focus on the eye and the bird angled nicely toward us. Nice painterly background. As you say it could be sharper but this is still a pleasing image.

Nice pose against a pleasing background. The eye looks quite sharp (were you using the animal eye focus option?), but I’m surprised the wings don’t look as sharp. I read your article on the R5-thanks for posting it. Agree with the id of a juvenile white-crowned sparrow.

Thanks guys for the ID – I have seen a few White-crowns around, but Golden-crowns have been more common here. (I’m wondering how all the fires will affect the populations.) This was the second day I had the camera and I was hit and miss with getting on the back button for eye AF. (I have AF-ON set to BBF and * set to EyeAF). I had been working this tree for about 20 min, getting a Nuthatch, Dark-eyed Junco and GCS before this, so I was not as steady as I might have been by then. I think I was resting the camera or my hand on a railing but I suspect at 1/1000 there is some camera shake. Here’s one a couple of frames before that is sharper, but the head is slightly behind the focal plane. About the same crop, and only Topaz DeNoise done in PS – no LR adjustments for either one. I think this one is worth cleaning up. 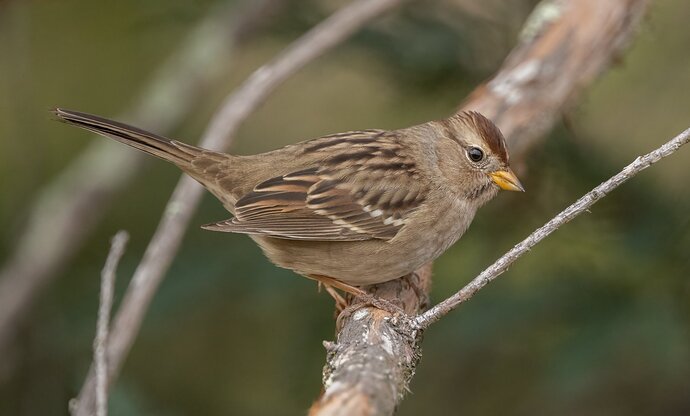 I think this one is worth cleaning up.

Agree. Nice pose and good detail with a nice background.

Wow. After comparing the two images that is a lot of clean up. Interesting.
Both are nice poses but I agree second pose is a bit more interesting plus tail is in focus. The eye in first image looks quite sharp but second image does has better focus and seems to extend forward better also.
Nice bg, nice sparrow and nicely done.

I think 2nd image is improved with respect to contrast.
I think this is Golden Crowned most likely.

The pose of the bird itself is better in the second one but it bugs me that the BG part of the branch grows straight out of the top of its head. The branch makes a turn right behind the bird which is hidden.

GCS would make more sense from context as I shot some adults in the same tree just before this. Hadn’t seen a WCS for a few days. Here’s a better top view. I cloned out the branch on the right in this one. 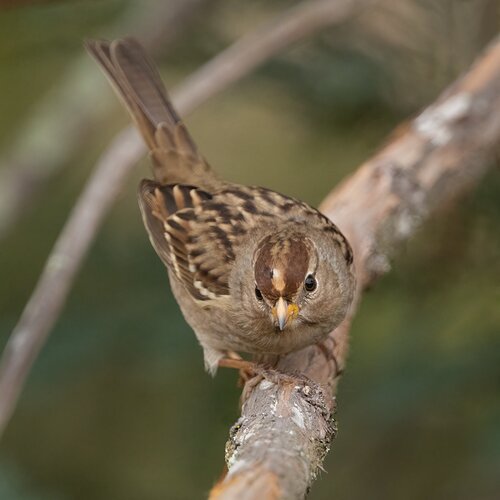 I like the pose in the original post, Diane, but it’s a difficult one to get adequate depth of field. It doesn’t look like there’s a significant camera shake issue to me as that would affect the whole image. I think the original ID of White-crowned is accurate. Looking at my Peterson, the
golden-crowned juvenile doesn’t have those two distinct brown bands on the head. Looks like your new system should work well.

Tnx again, guys! I’ll never be a birder – ID is too hard! But I sure love photographing them! Enough DOF is almost just luck.