Squeezing Through The Gap 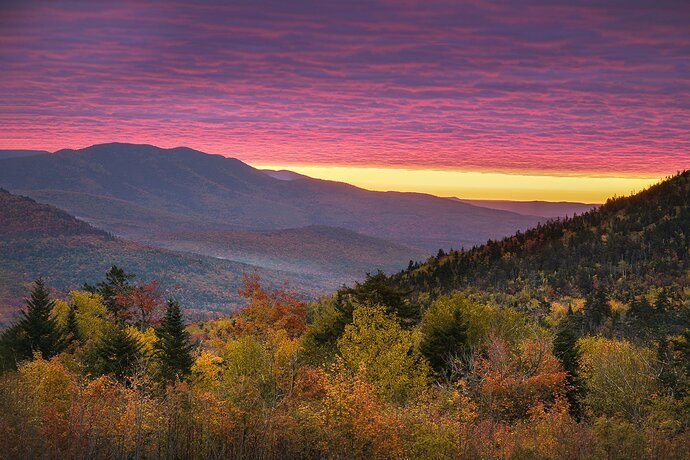 Rework with darker dark tones in the foregound 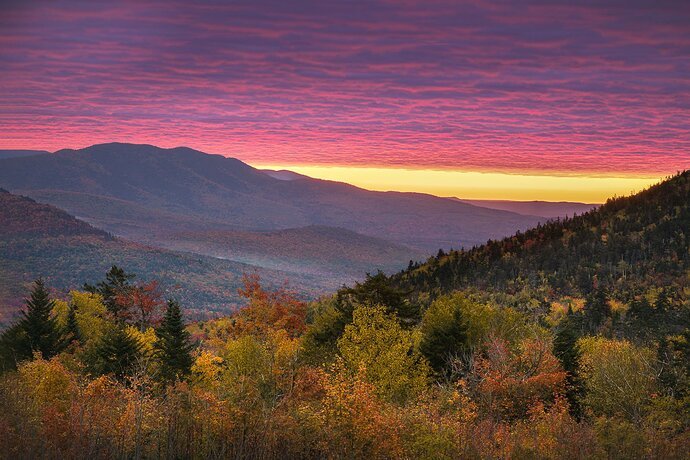 Rework #2 with some taken off the bottom, as suggested by Harley 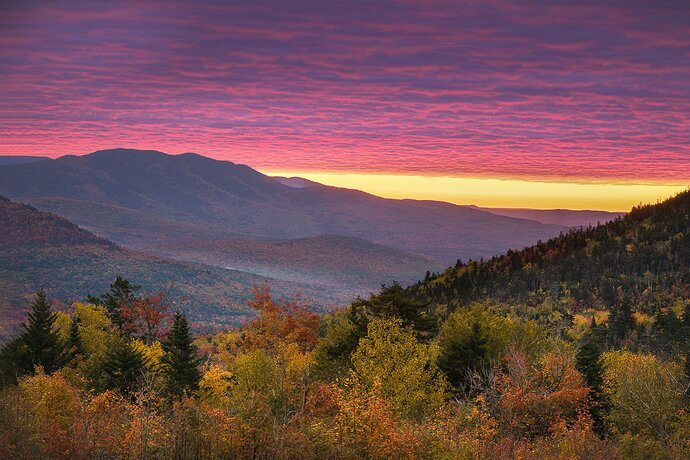 This autumn @Alan_Kreyger and I spent four days in northeast Vermont, before heading south to the White Mountains of New Hampshire. During our time in Vermont we had nothing but rain and fog the entire four days (which actually was not a bad thing). For our first morning in New Hampshire we drove to the summit of Kancamagus Pass about 50 minutes before sunrise. The clouds were still very thick and heavy across the entire sky. But then about 30 minutes before sunrise a faint red glow appeared just above the horizon to the east, and I thought we maybe had an outside chance for something.

Thank the Photo Gods for gaps on the eastern horizon. This light and sky color lasted about 10 minutes before it shut down again when the gap closed off almost immediately after actual sunrise. At least it was a small change of pace from four days of shooting in the rain and fog.

any critique and comments are welcome

Is this a composite: Yes
This image is a blend of 3 exposure brackets, blended manually using TK Luminosity Masks

Really super, Ed. The weather moves fast up there, for sure. Glad you were on the spot and prepared to take advantage. The blend looks natural to me although I wonder if the trees would have been so bright. Maybe they were. Either way the white balance looks good, too. The different diagonals provide almost a cadence and rhythm to this. Oh and the clouds, they’re nice too, lol.

Man, you killed it here with this sunrise Ed. That sky reminds me of one I captured in Sugar Hill a few years back. It looks like you and Alan had a very productive trip to NH and Vermont! The blend looks great and I love those diagonals of the sloping ridge lines as they give this scene a nice sense of depth. I could see the saturation of the yellow in the sky slightly lowered, but that is being super picky and just a personal preference. How crazy was the traffic on the Kanc this year? Beautifully done!

Beautiful light and color. I might try trimming a bit off the bottom and further emphasize the mid and back areas. Sweet conditions!

Wow, that sky. I haven’t seen anything like this in a very very long time. All has been said above, but I want to comment on how the trees in the distant hills look like color noise. Maybe, just maybe, reducing “texture” slider will help to bring down the “sharpness” of the noise?

Ed ,did you make a deal with those photo Gods you mentioned ?? Or was it for all that moment in time. Beautiful captured to my eye !

Fabulous image! My only suggestion is to slightly darken the light area just above and to the left of the center point of the photo.

This is a fine look at the very brief sunrise that we experienced on the pass. As you mentioned it was very fleeting, but it did provide us with this beautiful sky. It’s interesting that @Adhika_Lie mentioned the colors in the distant hills. While processing my images from this location, I was surprised at the colorful details in the distance as well. Having witnessed this scene, I have to say the detail and colors look right. I think the detail and saturation that looks like noise is from the purple sky and distant atmosphere. That being said, I will have a go at Adhika’s idea.

Your bracketing and blending work on this really maximized the impact and the realistic look.

My one nit picky ( very subjective) suggestion is to increase the purple sky light that reflected on the foliage in the foreground. It may be personal preference, but I believe with this sky you have the discretion to push the purple color glow and luminosity in the near foliage a touch more.

I was surprised at the colorful details in the distance as well. Having witnessed this scene, I have to say the detail and colors look right. I think the detail and saturation that looks like noise is from the purple sky and distant atmosphere.

I think this is only a problem at this viewing size. I bet that this looks gorgeous when printed at a decent size.

but I want to comment on how the trees in the distant hills look like color noise. Maybe, just maybe, reducing “texture” slider will help to bring down the “sharpness” of the noise?

There should be no digital noise here, the exposure brackets were all shot at ISO 200, and the distant mountainside was entirely blended in from an exposure that did not require any exposure lifting. I think the texture is just the shapes of the distant trees, which are a bunch of different colors (red, orange, yellow, green) all interspersed, so it creates a kind of dot pattern. I applied sharpening globally, and I don’t think it’s due to sharpening because the sky textures look pretty clean. I tried a rework with reduced texture masked into that area, and didn’t like how that looked.

The thing I was worried about was whether the detail in the foreground trees was too HDR-ish, or whether it need to be darker. @Kris_Smith thinks it may have been pushed to far, but @Alan_Kreyger wants more luminosity in the near foliage. I think I’m leaning towards taking it darker in the foreground, but retaining the lighter tones in the near foliage . See rework above.

Yeah, the trees at the bottom are kind of ratty looking because they are at the edge of a clear cut at the overlook . Rework #2 above trims some off the bottom and the right, to maintain the aspect ratio,

How crazy was the traffic on the Kanc this year?

Ed, does this answer your question? 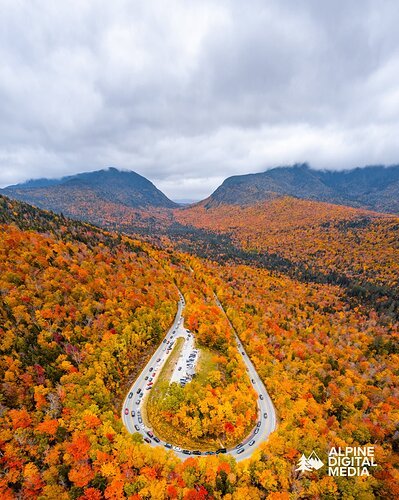 I prefer the slight crop in the rework as @Harley_Goldman suggested. I offered a quick rework that includes a linear gradient mask over the near foliage. I added a tint to magenta, dropped the shadows and blacks and raised the white a touch. Too much for your taste? 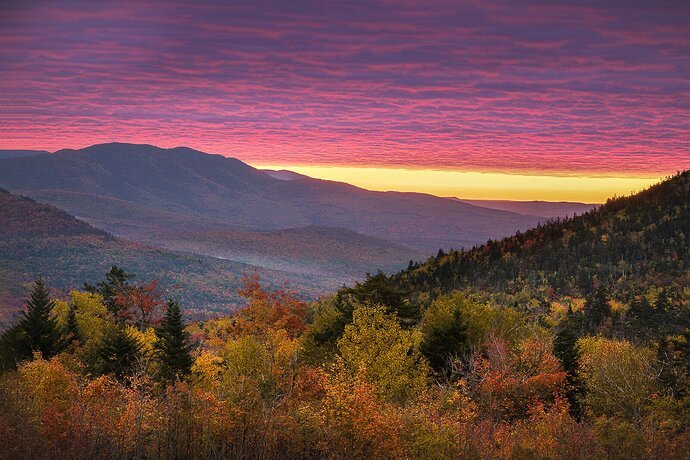 I added a tint to magenta, dropped the shadows and blacks and raised the white a touch. Too much for your taste?

I think your tweaks to luminosity and contrast helps in the deciduous foliage, but it blocks up the shadows in the spruces a bit too much for me. Some masking away of the spruces could easily address that however. In terms of the added magenta, it creates more color separation between yellow and orange, which helps. I though the oranges got a bit too intense, but I went back and added red instead of magenta, and liked what that did. But the important part is separating yellow and orange more.

A little late to the dance, Ed. But a really gorgeous picture. Obviously the colours are spectacular, vibrant, and a real treat for the eye. But it’s all just noise without the exquisite composition - those diagonals crossing each other draw me in and make me feel like a bit of a voyeur (in a good way

Yes it does, Ed. I thought it might be crazy and that just confirms it.

Now that’s a challenging photo. To be able to capture the magic of the sky without losing the magic of the fall color, or making it too neon, is a real feat. The only thing that seems incongruous to my eye is how dark the evergreens are; they don’t seem to match the rest of the image. Twas mine, I’d play with opening them some. I think that would better match the rest of the image. Here’s a crude stab to illustrated. 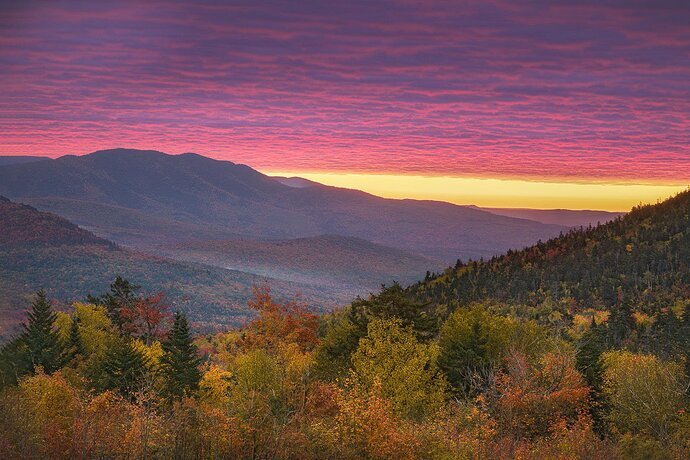 Thanks John, I agree with you, and like what your suggestion on the spruces does in your rework.

Thanks Kerry, appreciate the comments.

But I can’t take much credit for the composition, this is actually a tripod hole location, with a fairly obvious composition that really only works from a relatively small area of view, due to some surrounding trees.

But when the sky and the color both line up like this, I will not turn my nose up on a tripod hole.

@Ed_McGuirk What is a tripod hole?

What is a tripod hole?

A tripod hole is a location that is so well known that many photographers have shot the same scene, and sometimes virtually the same composition. So many photographers have stood in the same spot that the ground has 3 indentations in it from the tripods. In Canada, think the classic view of Lake Louise and the glacier from the shore at the back of the Chateau Lake Louise. This particular location is at a mountaintop overlook that is a pullout on a paved road, one of the few car accessible high mountain views in New Hampshire.

I normally don’t like to shoot a lot of tripod hole locations, but on this trip I had @Alan_Kreyger from Michigan along, who had never shot here before, and it’s one of the famous places that I thought he should see. And the conditions weren’t bad either…