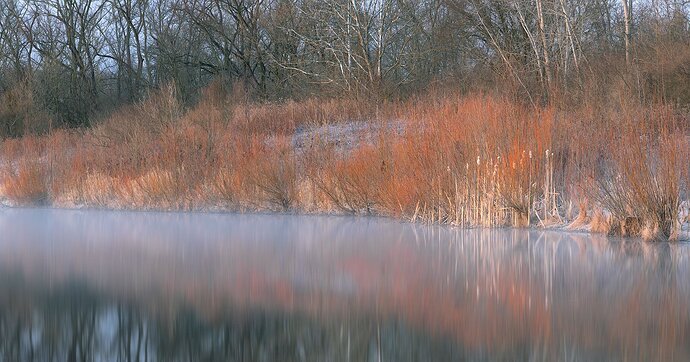 I shot this with the intention of it being a panorama, but there was no way to get closer and I don’t have a longer lens so I had to resort to some pretty heavy cropping. The long end came out to about 4500 pixels. What I loved about this scene was the contrast of the cool soft steamy wanter with the rigid stalks in the background. Also the contrast between the cool frost morning and the warm willow stalks. I have to think about when the best time to shoot this might be, I really like the stalks on the bottom but would love the trees to be more full in the back to block the patches of blue sky. I tried to avoid some of the more distracting elements though.

I sense a slight magenta cast to the image, I would like to hear your thoughts. I didn’t have to do a ton of work with the exposure but did add some saturation to the reds and reduced clarity and added just a touch of dehaze to the steamy water area so I want to make sure those aren’t overdone either. I’m always interested in overall impressions about composition, mood, and editing. This is one where I had a really strong sense of what I wanted in/out (but due to no long lens had to resort to cropping which I know isn’t exactly the same) and I knew the look I would go for with the edit. I will avoid spoiling any mystery with mood/emotion by giving it away here.

Scenes like this are tough, but draw my attention, too. For me the cattails are the major attraction - the reflection on the misty water is pretty fab. My eyes fall off the rest of the image though. The brown area in the center caught me for a bit as I imagined it might be a beaver lodge, but it’s not (at least I don’ t think so). Overall the colors are harmonious and I don’t see an offensive magenta cast in the mist or anywhere else. It feels restful looking at this. Nature is working behind the scenes though and I get a feeling of that as well.

Hey @Kris_Smith thanks for taking a look. The cattails were the initial draw for me as well, I knew I wanted to work with the reflection. I had to go with a longer exposure because the water wasn’t completely calm. As I looked further down I guess what caught my attention was that the steam was lifting a little more down there than it was by the cattails (or my perception of it was because I was looking through more distance). I was hoping that the three distinct layers along with the fog could hold the left side together a bit but maybe it isn’t as effective as I had hoped. Thank you!

Really nice work on this intimate scene David, it has a nice mood to it. Whenever you can salvage a splash of color out of late winter stick season, you are doing all right. The use of an ND filter creates a great look in the water and fog, that adds to the calmness of this scene. An ND filter is something that I always keep telling myself that I should purchase, and then never do. But it does a great job here, if you don’t mind my asking, what brand of ND filter did you use? I like your composition, you included enough of the bare trees to tell a story about time of year it is, but not so much of the trees or sky that they become a distractions. The cattails also make a nice focal point to the scene as well.

The extensive cropping used here would only be an issue for making larger prints, this looks fine for web display however. Time to invest in 70-200m or 70-300mm lens if you like to do these type of extractions scenes. I too detect a very slight magenta cast. I did a rework where I used PS color balance to add +5 green (opposite of magenta). The difference is subtle but to my eye I think it helps slightly. It does some nice things to the fog, and neutral colors like fog are where you can really see the effects of a color cast. 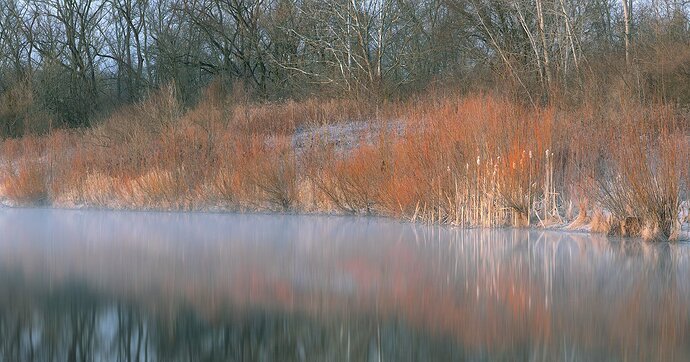 @Ed_McGuirk Thanks for checking it out. The filters I use are from Kase. You screw a metal ring onto the end of your lens and then the filter is magnetic and attaches to it, pretty slick set up. You can stack multiple together, so I have a 3, 6, and 10 stop along with a circular polarizer. They seem to get pretty good reviews, I have noticed that with the ND’s I get a bit of a blue/magenta cast to the images but it is usually correctable. I mistakenly bought mine to fit my current lens set up, I should have gone larger. My hope is that I can sell them when I do upgrade some lenses and purchase a larger size with the appropriate step down rings.

My hope was that the cattails would be of enough interest along with the splash of red to make the image more complete and not just about the fog. Adding that touch of green is helpful, especially in the fog.

Now I just have to convince my wife that I need a new lens…!!!