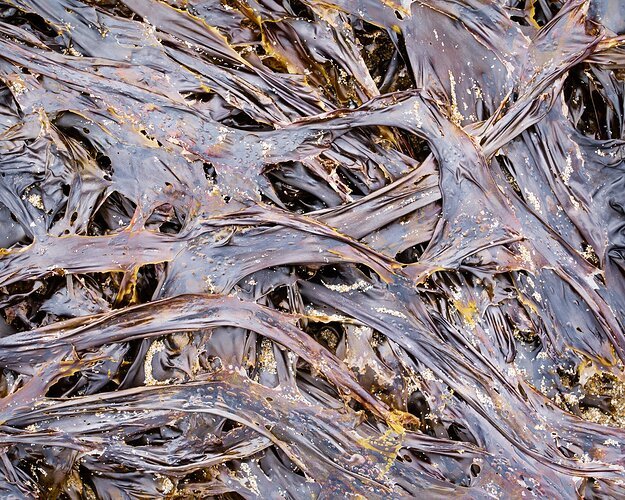 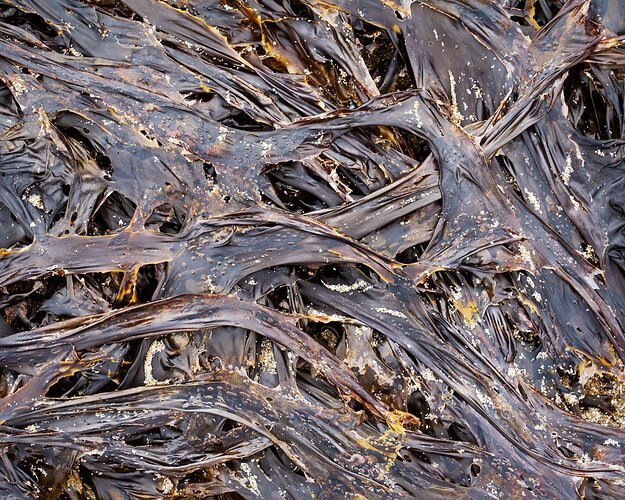 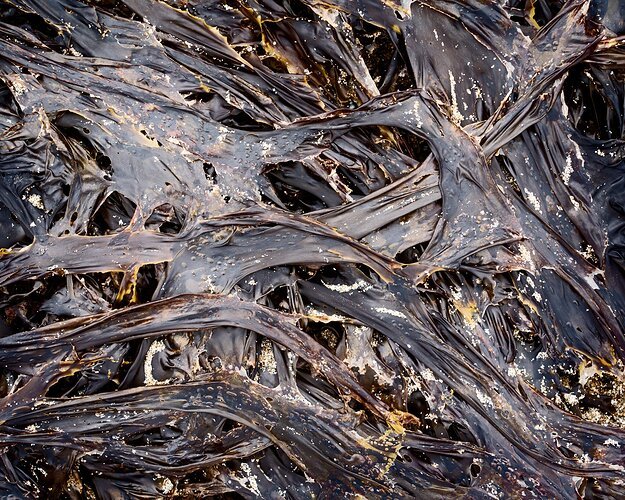 I went down to the beach at a really low tide last week and was rewarded with lots of exposed kelp-covered rocks. I just couldn’t pass up photographing it, even though it looked rather creepy.

Too creepy? Any other comments welcome.

Bonnie, I wouldn’t have guessed that this is an image of kelps at the beach. Creepy? Maybe not as much as you think it is, especially given the proper context. I think you have successfully showcased the theme without actually showing a pattern (at least not in the usual sense to me).

Glad to see you continue to stretch your vision and show subjects that most photographers would pass up. I agree that this is a bit creepy but also fascinating. It’s an unusual subject and I love it. Nice work.

Bonnie, my first reaction was, “I don’t think I’d want to eat this…”

It is very intriguing and good for a nice long look. I wonder how some burning of the dark tones in the brighter parts (especially around the upper 1/3 point) would look. Then the contrast there would match more closely the contrast in the rest of the image. (Could very well destroy the fun of the viewing also…)

Sea wrack is notoriously hard to photograph as I know from my countless failures.

You did good though here. It’s chaotic, but has enough central organization to make sense. I’d be tempted to run an adjustment brush over the largest and lightest patches with some dehaze dialed in to see how it went - I think if you bring up the contours by concentrating on the darker parts of those biggest pieces it would be even more interesting.

Thanks, @Adhika_Lie, @Matt_Lancaster, @Mark_Seaver, and @Kris_Smith for your comments. Adhika, I did think this wasn’t a pattern in the usual sense, but what the heck.

Bonnie, my first reaction was, “I don’t think I’d want to eat this…”

Funny you should say that, Mark. The last time our nephew came to visit the coast, he collected some of this to dry and eat!

I’d be tempted to run an adjustment brush over the largest and lightest patches with some dehaze dialed in to see how it went -I think if you bring up the contours by concentrating on the darker parts of those biggest pieces it would be even more interesting.

Kris, this is an excellent suggestion. Considering my idea of stretching, it makes sense to accentuate the features that show stretching, rather than making the flat parts most prominent (which is what I did in the original). To that end, I actually increased the midtone contrast with a curve, then dodged/burned to bring out the linear features and edges. Thanks for making me think harder about this one! Rework is posted above.

Thanks for making me think harder about this one!

No problem, Bonnie - this is why we’re all here!

I brought this into Ps to do what I described. The colors were quite different than what you posted. Did you save as sRGB? It looks like you left it in Pro since that’s how it opened for me. Anyway…this is my version - camera raw for some adjustment brush work. sRGB jpeg file - 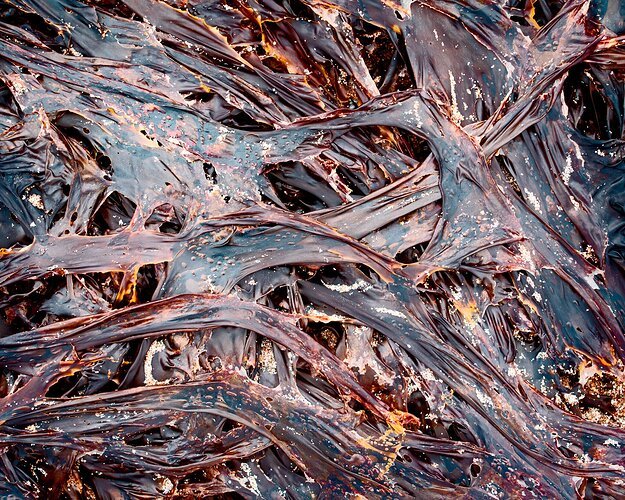 I love the rich reds that I found when I had it in Ps. Really makes it sing!

@Kris_Smith, wow, that is a lot more colorful. I do like more blue/magenta tint, but it’s a bit too much color for me (I tend to dial down the color mostly). and I like the way you brought out the shininess. Had another go at it - posted above. Does v3 open in sRGB?

Does v3 open in sRGB?

It opens in Pro RGB for me. Much more color than in the NPN version. Hm…when I force it to sRGB it desaturates a lot.

Bonnie, I’ll vote for rework 2. It lets the details in the seaweed show as well as emphasizing the weave and flow of the tangle.