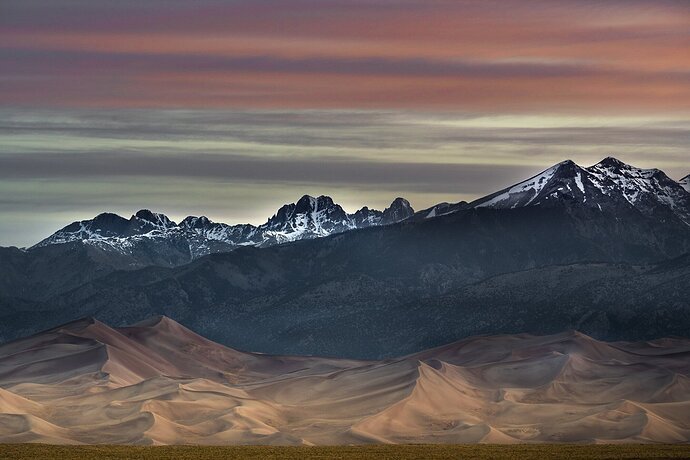 I had the opportunity to visit Great Sand Dunes National Park last week. I made photographs at sunrise and sunset and will post a few. Incredible views at these times of the day. I have never been to sand dunes like these prior . The light, lines and forms were amazing in the dunes at these times and dull at any other time. I found the exposures to be challenging but did not do any stacking. This is my first shot at truly grand landscapes…not many in northeast PA.

Comp and processing and anything else

This is truly a place worth visiting and photographing. I like the layering and the subtle colors of the image. Nice image.

This is a very lovely scene. I’ve never been there either, and your photo here makes me want to see it!

It looks like you had wonderful light, with the foreground dunes and the high peaks just beginning to be touched by the sunrise. The snowy areas on the peaks look a bit odd to me, though - as if you dodged them a bit to bring them out more. The level of brightness doesn’t match the rest of the scene. There’s also some haloing around the tops of the mountains, as if the dodging of the snow reached into a bit of the sky. This really is a stunning scene, and I think that targeting the dodging/burning to specific areas would help. I don’t know if you use luminosity masks, but they would be helpful here, for the dodging/burning.

Thank you for the comments @Richard_Teller @Bonnie_Lampley . Bonnie, I was trying to use radial filters on the peaks and re did them more carefully in this version. I tried luminisity range mask in LR but could not get it right. I think the brightness level of peaks is better reflective of the opriginal scene as well. 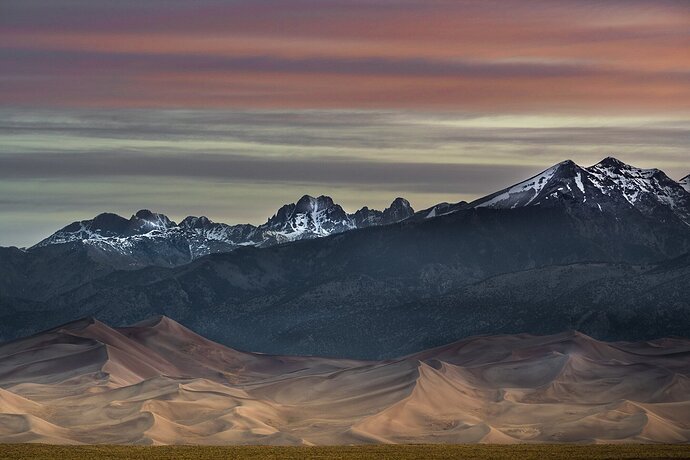 Toto - we are not at Lake Aleeda anymore !!!

I think this is a stunning scene as well. I like how you kept the sky colors relatively less saturated, it keeps the viewers attention on those wonderful dunes. Overall I think the composition is very well balanced, there is something of strong interest across the entire image. Well done Mario…

It’s a nitpick, and a matter of subjective personal preference, but I could see adding a sliver more of the grasslands beneath the dunes. It should be easy to do via Content Aware Fill.

I was trying to use radial filters on the peaks and re did them more carefully in this version. I tried luminisity range mask in LR but could not get it right.

I have redone the highlights on the peaks to better reflect only the one side and I think this is much better and more realistic as you suggested @Bonnie_Lampley . @Ed_McGuirk thanks for comments and I gave it a go on the bottom strip but prefer not losing any dune structure. Not sure I di that correctly however…you tube video! 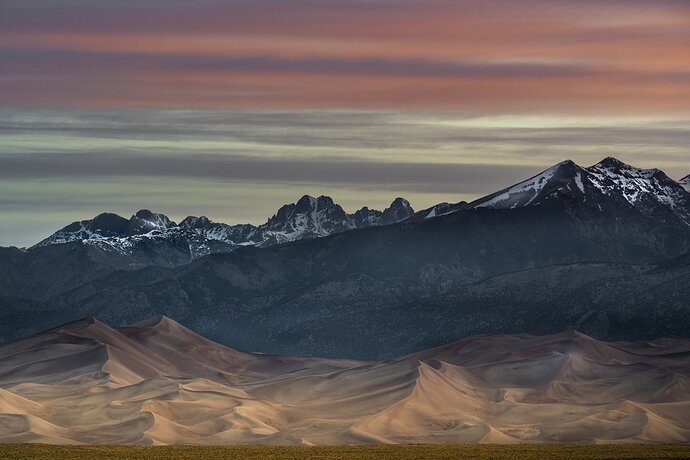 One of the great things about our world is how light appears out of dark. That transition never fails to amaze us. And I think this image captures the wonder of it all. The dunes are emerging from their darkness.

Personally I don’t particularly like the grass at the bottom but I don’t see a good solution for that. Neither cropping it off nor increasing it improves the image significantly. Maybe desaturate it? Actually I agree with Ed that increasing it may be better.

I just love to shoot sand dunes and you captured a really nice moment here Mario. I think that @Ed_McGuirk hit on the one part of the composition that could benefit from some additional canvas and that is the grass at the bottom of the scene. I did a scroll crop to remove it and I did not like that at all so I think adding a smidge more grass could better balance the scene and maybe desaturate it just a tad.

An amazing place and an amazing image. Your second rework is the best IMO. My only comment is, as already pointed out by others, the grass strip at the bottom. Maybe darken and less vibrance in that part is an option?

thanks for comments and I gave it a go on the bottom strip but prefer not losing any dune structure. Not sure I di that correctly however…you tube video!

For explanation of the technique, more than for the effect on this specific image

In Photoshop go Image>Canvas Size
In the pop up dialog box that appears, set Height to 1.5 Percent, and then click the top center section of the grid below, this adds 1.5% extra canvas along the bottom edge, and fills it with blank white canvas.
Then using the Rectangular Marquee tool, select the grass only.
Then Edit>Content Aware Fill and Photoshop will do its CAF magic

For illustration here is how that looks. I also de-saturated the grass as some other suggested too.

This may or may not be better, but I wanted to explain the technique for you Mario, since you said you weren’t sure that you did it right. 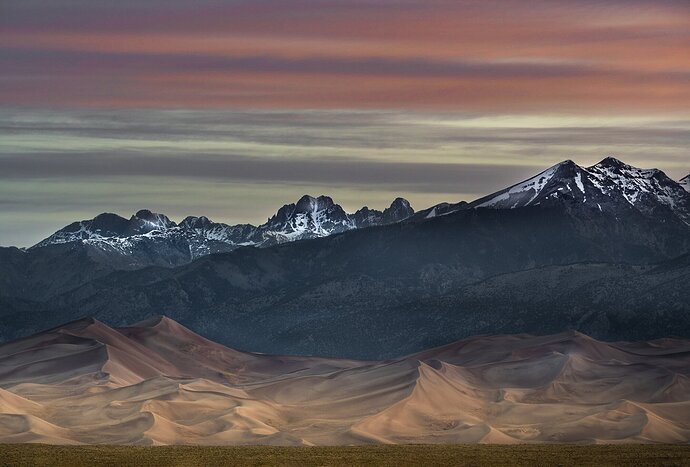 @Ed_McGuirk Many thanks Ed. Here is the rework with desaturation. 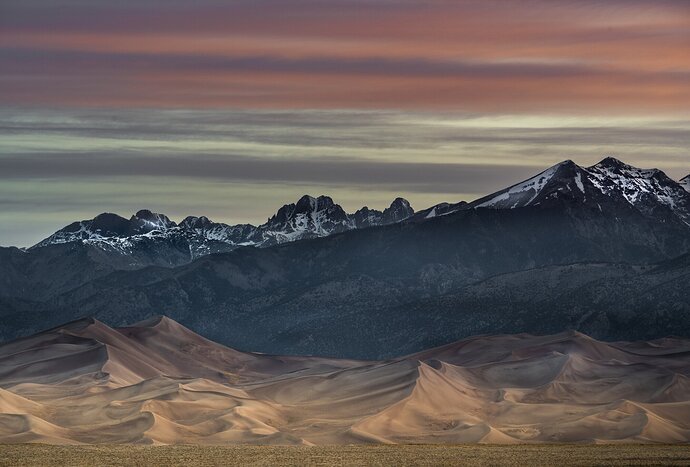 That sure looks grandeur!
I really like this scene

This is my first shot at truly grand landscapes…not many in northeast PA.

I would like to see you try that in Portugal! Or most places in Europe anyway…

Thank you for the comments

Lovely image in so many ways! Beautifully seen. Personally, the peaks are still a bit “crunchy”; keeping in mind that things gradually recede in focus as they are further back, I would lessen the clarity/ texture/ sharpness of the peaks.