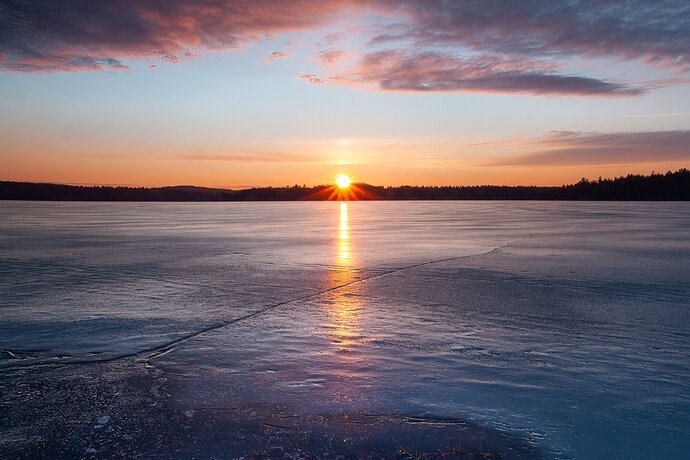 I have never lived in a part of the world that didn’t have winters with plenty of snow so I had to dig deep to come up with one for this week’s theme. Lo and behold a huge frozen lake and no snow. It’s from 2012.

Ah this image takes me back and now the title is even more significant. At the time I named it this because Lake Massabesic in Manchester NH is a frustratingly difficult lake to photograph. Why? Lack of foreground elements. You can spend a lot of time hunting for something during sunrise or set and I remember doing that here. It is funny and ironic because after all that hunting, I just now cut all of it out. Why? Because it’s divisive and takes attention from the more interesting part of the photo (cheeky sunstar that really didn’t need to be there, but I’d just learned how to make them so…oy vey). But also now the title references my eternal quest to become a better landscape photographer and some of the “rookie” mistakes I wouldn’t make today. But that’s how we learn and grow. Despite its flaws, I’m not ashamed of it and will even brave your comments!

Well, I should have bought and used a longer lens for this and that’s also part of learning - medium and long telephotos are terrific tools for landscapes, not just wide angles. Are you really miffed the lovely crack just leads off into the distance? Is it just too rank amateur to be seen in such refined company? 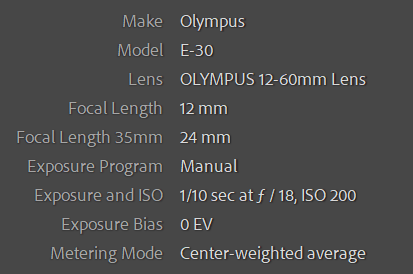 Lr for everything basic including wb adjustment, curves, and a pretty massive crop. Topaz Sharpen to bring some life to an old file. Photoshop for some luminosity masking to give greater contour to the ice itself and remove some distractions. Hit it with the Soft Pop action in the TK8 panel, lowered the opacity and used a black mask and a white brush to put it where it needed it.

Hi Kristen! I also started with a fascination with sunstars, that i still havent really shaken. I like the crack in the ice, actually my favorite part of the image. Wish we had some more ice up north this year, but so far we have been lacking in much that looks like winter.

@Kris_Smith I like the crack too, it gives the shot tension to my eye. I feel you could crop off even more from the bottom (all or most of the water) as I find that a bit distracting. I love the tonality here, also how the sun reflects both up and down the shot. Now, I’d better go off and learn how to make a sunstar!

Thanks @Cameron_Wilcox & @Mike_Friel - spot on! The crack and the ice itself is the star here, not the, uh star. Oy vey. I still make those from time to time, but this was a bit much. Anyway…the bottom of the photo is more ice, just thinner and darker. Below that are a bunch of frozen grasses that I took pains to include in this shot when they have no business being in it so they got the chop. So funny. I shake my head at it, but it’s the only way I learn lessons really well - by failing.

The first words I thought of when seeing your sunset, Kris, was wonderfully quaint and certainly not “rank,” or “rank amateurish.” From my perspective as a relatively newbie/beginner, I still love the “cheeky sunstar” and even the crack in the ice. From my limit time here with NPN and in the category of “if it were mine”, I can see cropping from the bottom would eliminate some unnecessary foreground. I would also consider cropping from the left side to off set the sunset. Something like this: 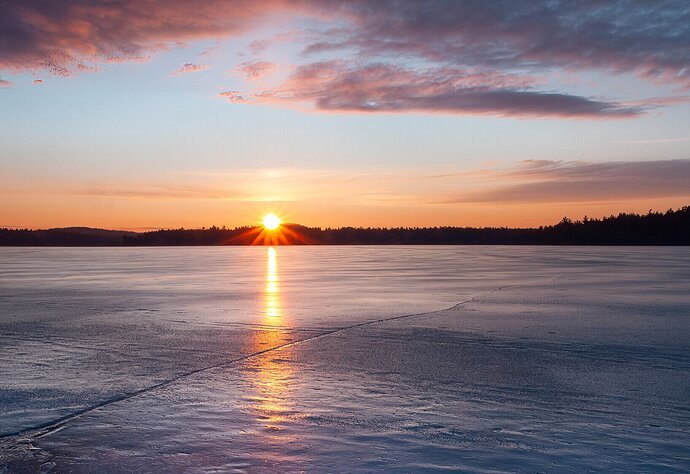 I like this crop - it creates a nice flow from left to right to left.

thanks @linda_mellor & @Matt_Payne - you two are daring!! Crop more! OMG.

I know right! LOL
I hate cropping my own images but sometimes it just WORKS haha.