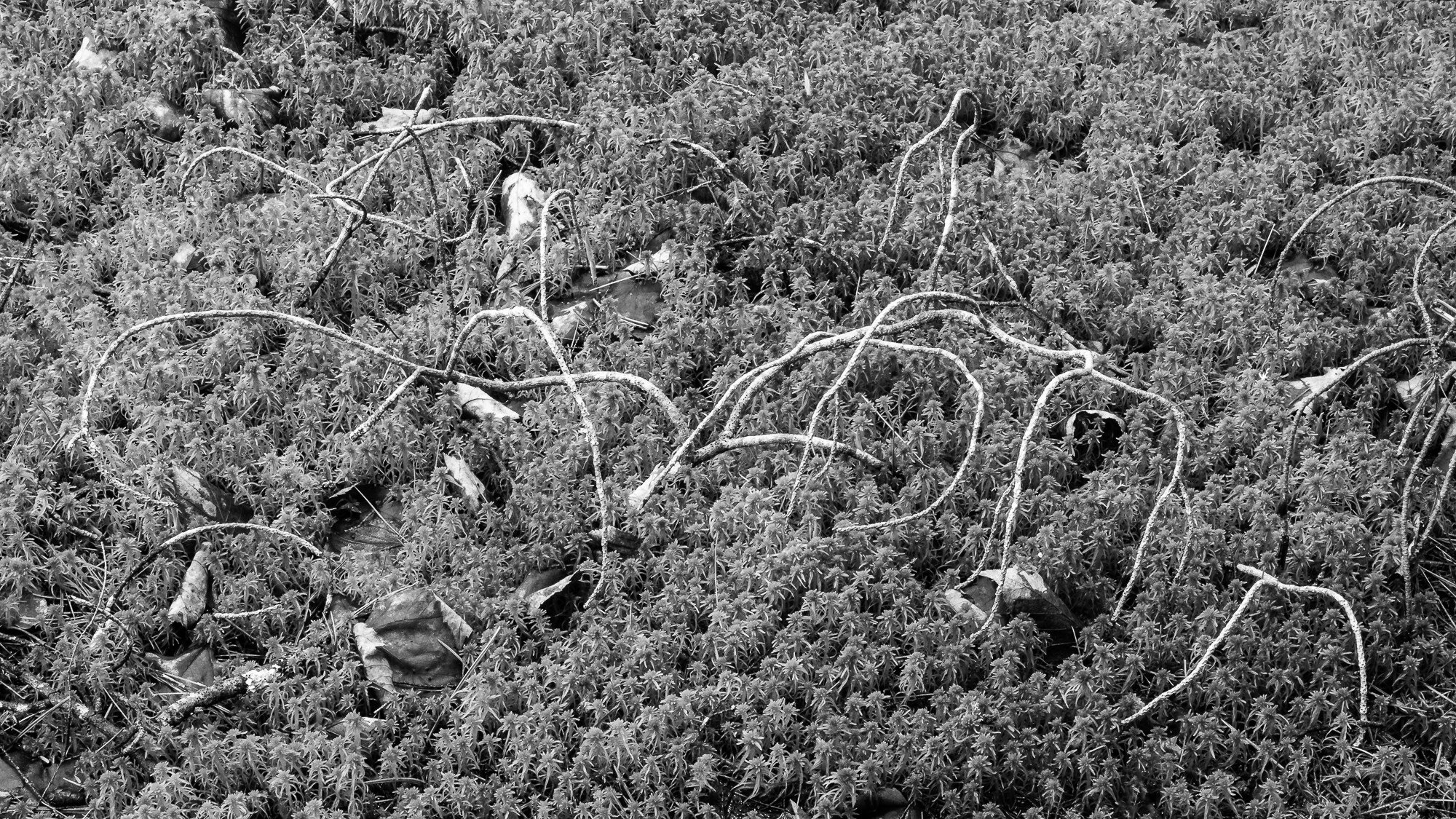 While hanging out in the hemlock grove next to the spruce bog, I saw this little scene. While I like shooting them and always marvel at them in person, I often struggle with how best to present them.

Obviously there’s a lot going on here and that’s partly why I switched to monochrome. The green of the peat moss was overwhelming. Seriously green - spring and rain and just plain bogginess makes for intense color. I probably blew the green channel out even though I was using a polarizer. Anyway…I fiddled with it quite a bit, especially in the color channels, pulling things up and down. There is a slight change in light from left to right and I left that un-enhanced.

The crop was a deliberate choice as well…the line of the twigs embedded in the moss needed some framing. I also removed some bits around the edges that drew the eye away from the main line of branches. Done w/a combination of clone stamping, content-aware fill & plain healing brush.

I can post a color shot if you’d like to play with that one or think it would work better that way.

Is there enough here to sustain interest? Does the processing work? Given my explanation above, I’m open to suggestions.

See above for processing info.

Its interesting how similar an image this is as compared to @Bonnie_Lampley recent strands and moss post, despite the obvious differences of color vs. B&W, etc.

Similar to Bonnie’s image it’s interesting how the chaotic strands lend a sense of cohesion to the overall image, again partly due to the strong use of a diagonal line.

As presented in B&W, while I like the tonality of the moss ( it shows nice detail), I think some edge burning would help hold more attention in the image center. I think with this tweak, the image works very well in B&W. Bonnies image worked well in color, but she had moss with both interesting yellow and green colors, however I suspect this moss is more monochromatic green, making B&W a good choice here.

Moss and twigs are always fun to compose. The contrast between the linear twigs and richly textured moss is interesting. To my eye, though, the twigs don’t stand out enough. I’m thinking bringing down the yellow or green sliders in the b&w conversion a bit might be good to make the twigs more prominent.

I’m thinking bringing down the yellow or green sliders in the b&w conversion a bit might be good to make the twigs more prominent.

Thanks Bonnie. Unfortunately the moss has so much yellow in the mix to make green that sliding the yellow channel around muddies the overall green color. This happens to me a lot, but I did have a go with curves and came up with an alternative - 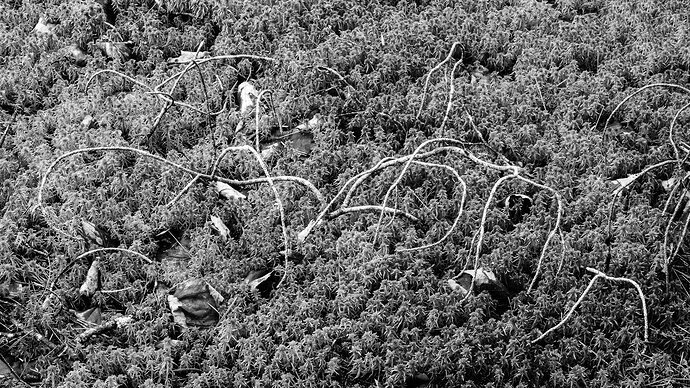 Now I see your moss shot and mine together in the summary page, I see the similarity. Oh the fun we’d probably have walking the woods together.

@Kris_Smith, yes, it would be fun to have a visit and walk in your woods (so much more moss and wet stuff to see).

For b&w conversions where I want some parts dark and some parts light, it’s sometimes helpful to tweak the colors in ACR/LR first, then do the b&w. In your photo here, if you want them moss to be darker, you could change its color to be more blue (filter with a color mask) first. Maybe warm up the twigs. Then it would be easy to make the moss dark by pulling down the blue slider and twigs bright by pulling up the yellow slider.

The second image makes more sense to me. the twigs stand out more. But for me my eye did not know were to go, it was looking for a strong center of interest to land on and it just keep wandering around the image.

It is great that you find this type of scenes out of nothing, many people would have ignored this setting. I could not resist to download the image and play around a little bit. I emphasized the difference in light to get the twigs more dominant the more to the right you look. I also increased the contrast to also show the patterns in the moss. Not better, but somewhat different. 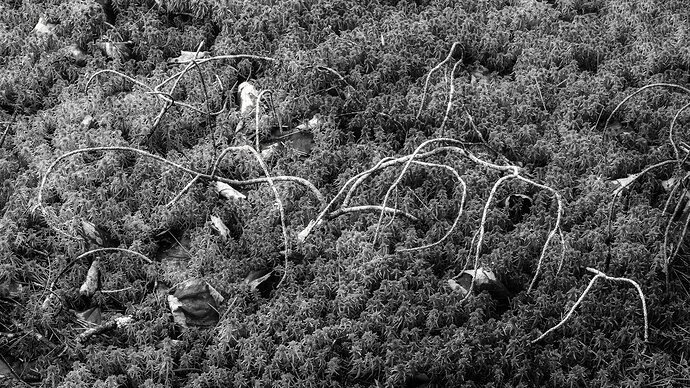 I could not resist to download the image and play around a little bit.

Thanks Ola, that means a lot to me and I like your version, too. That’s the thing with scenes like these; there’s almost no wrong way to process it. I hope you had fun!