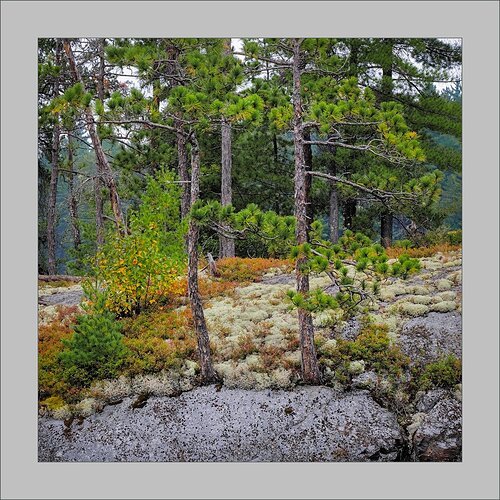 I spent most of fifteen years living in the high mesa country of northern Arizona. This picture is for me, strangely reminiscent of that high desert country. Of course, it isn’t that at all but rather Canadian Shield. It occurs to me, however, that maybe what connects them in my mind is the tenacity that it takes for flora to survive in either place.
There were a number of things that drew me to take this picture not the least of which were the lovely colours and the marvellous textures. But what I think really caught my eye was the way in which the two foreground trees seemed to form a portal in front of which is (mostly) bare rock and behind which is a plethora growing things. The two trees mark the spot where the rock levels out enough for life to get a foothold. I find it staggering how little life (life besides us, of course …) needs, not only to get going but to sustain itself. We really need to take up this lesson, don’t you think?
This picture was shot in portrait mode because I didn’t want to detract from the verticality of the two trees that are the main focus of the picture. However, when I downloaded and saw the picture, it was clear that all that sky above was a major distraction. So, I cropped from the top and cropped some more until it was square. I rarely compose for this aspect ratio and didn’t intentionally for this one either. What do you all think? Does the square format work for this? Does your eye want to roam upward or is there enough interest to keep you here in the frame? So, yes, feedback please on colour, texture, composition and, as usual, whatever this photograph stirs in your imagination.

I think the aspect ratio for this image is just right. There seems to be some sort of relationship between the two trees, doesn’t it? I think this image would have been weaker with a single tree in the front. They say that you should always shoot an odd number of primary subjects but I really don’t know why. I suppose your eyes are supposed to bounce back and forth between subjects but that doesn’t happen here. Maybe it’s because they aren’t really that prominent. Is that caribou ‘grass’ below. I find that to be really fascinating when I’m in Alaska.

What does it say to me? Stability. It’s not only the trees themselves but the composition implies it with equal spacing between trees and to the frame. The solid rock shape on the bottom provides a strong pedestal upon which all other shapes rest. So I’m going with stability - visual stability.

The composition works for me Kerry. The strong vertical lines of the trees provide a sense of rhythm to the composition. While the scene is a bit busy I like how you used the color contrast to create separation between the foreground and background trees. The texture in the foreground lichen (?) together with the rocks also holds my interest. This is a scene that would benefit from some fog to create more separation, but I don’t know how frequent fog occurs in this landscape. I wonder about even using shallow depth of field to create further separation. Just thinking out loud really.

I like your image very much. The two trees in the foreground form a frame for one in the background. I like the framing and aspect ratio. You definitely do not want any more sky in the image. The only suggestion I have is to slightly darken the foreground rocks which I did with a gradient so it would not be too dark and did the same at the top of the image. To me, it focuses your eye on the gorgeous center part of the frame. 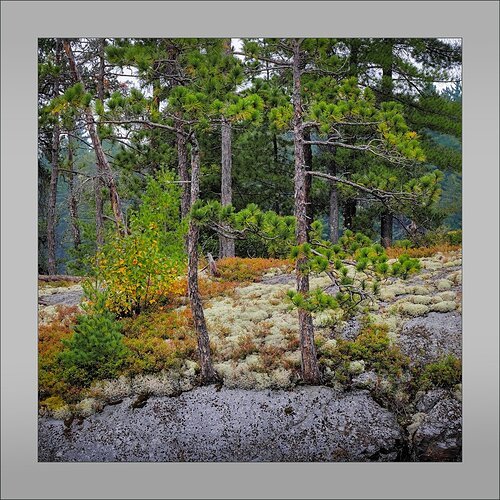 A little late here, but wanted to write that this is yet another beautifully seen image and capture.

Yes, the “portal” is impressed here and how you’ve composed retaining the vertical and all that, is quite excellent.

My first impression when opening this up though is how someone (a tog like us…) would even stop to consider an image like this. I mean, how many people would walk right by and never take notice? This is the beauty (well, one of them anyway) that we get to enjoy out in nature… and I love that you stopped and noticed - oh, and decided to photograph.

No nits or suggestions.

Kerry, I love this image. I just sit in front of the screen looking at the image and enjoy! It is amazing that such a rather common piece of nature can be turned into an amazing image by choice of what to include, how to place the objects and so on. Very well seen, captured and post-processed.

This is a very pleasing and calming image to look at Kerry. Like you say, the textures and colours are wonderful the composition along with the square crop make this image perfect in my mind. No nits from me.

Well, I love this for some reason I can’t quite put my finger on (to riff on Kris’s recent pond post). The composition is wonderful and the square crop really works with the two trees. The subtle colors are beautiful, as are the textures of the low plants. It’s the combination of all those things, though, that speaks to me, along with a sense of belonging here, even though I’ve never been close to the Canadian Shield.