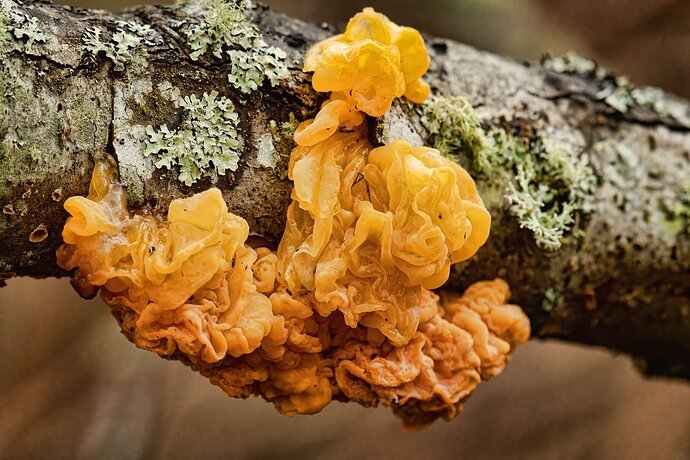 I was coming back from a morning of shooting birds at the local wildlife refuge when I came across this tree fungus off one of the boardwalks. This was taken with 400 mm plus 2X extender under very dark conditions. I did not see any other fungus similar to this and have never come across anything since in the same place. I’m sure there’s someone out there who can possibly identify this.

Cool! Looks like witch’s butter, Tremella mesenterica. In looking up the latin name, I read that these kinds of fungi don’t grow directly on the wood, but are parasitic on other wood fungi whose mycelium are inside the wood.

The fungus look like fabric. I like the glow of the yellow. Perhaps darkening the branch would make it so the bright lichens don’t compete for attention with the fungus.

David, the bright yellow fungus looks great…looks kind of like brains. I like the contrast with the green lichen.

Oh how fun! I just waded through the snow to take shots of jelly fungus also. I agree with Bonnie’s ID after checking one of my reference guides. I really like the arrangement you’ve come up with although a tiny bit of room at the top would be nice. Great handling of the color - yellow can get out of control and I only see a couple of hot spots. Thanks for bringing us a slice of the tiny worlds we share.

David, this was a nice find, and a great capture considering the lens you had mounted for the birds. I’m not familiar with the fungi, but it is very interesting. So glad you spotted it, and didn’t give up on trying to capture it in low light. Great job!

Wonderful capture! Good DOF to show the structure well but subdue the surroundings. A bit more on top would be nice but not a deal-breaker.

I’ve seen this stuff on rare occasions but never managed to get pictures. It’s a worthy subject for sure!

Really cool portrayal of the fungus David and I think I’ve seen this before but not as colorful. Lots of detail visible and enjoying the lichen-covered tree limb its attached to. A bit more space up top, similar to bottom , would have been nice.

David: Great use of your long lens and a great find. Really pleasing image.>=))>