Not quite sure where to post this image - it’s not macro and are fungi flora? Anyway I’ll leave it to the mods to move it if I’ve posted inappropriately.
Last week my wife and I spent three days at a friend’s get away near Bancroft, Ontario, which is about three hours north of Toronto – what we call the “near north”. The weather was gorgeous – the last of summer - and we hit the absolute peak fall colours. Naturally I took plenty of pictures of the trees, but I also took time for more intimate images including quite a few of mushrooms and fungi. I think I have enough for a small series that I’d like to call “Fungi Fantasia”. Regardless of the quality of the images, I love the title

. I spent about 90 minutes taking pictures of a dead downed tree I stumbled upon, which had white fungi growing out of its side. The hazy morning light was like a huge soft box and I was in awe. I could have shot for another couple of hours. The patterns of light and shadow were so complex and beautiful. Any comments, critique or feedback is always welcome. 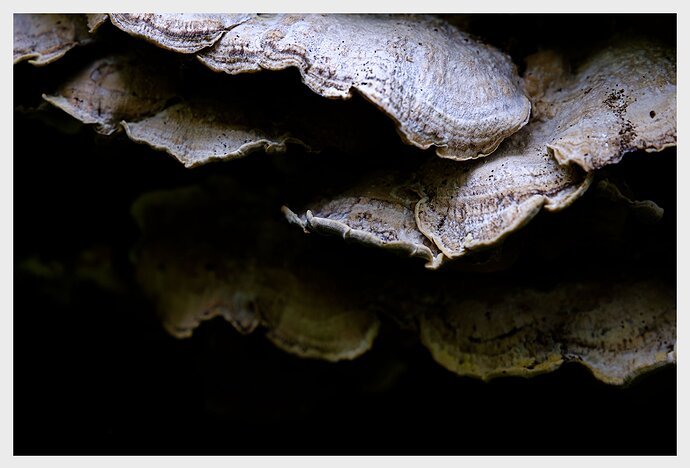 Great sense of depth. I sort of want to see a bit more on the top and less on the bottom. Their textures are wonderful.

Kerry, I like the layering effect rhythmic feeling the fungi are providing. And the contrast between the lights and dark work really well. Nicely seen and captured. I’m looking forward to the rest of the “Fungi Fantasia.”

I love taking pictures of fungi. I think it’s because you can eat them after it’s over. There’s also a dark mystery about them that’s different than pictures of flowers. I think this image conveys that aspect about them.

Very engaging texture and wavy pattern in these mushrooms.
The bright upper part is a lot stronger than the lower half. For me, bringing both upper and lower mushrooms toward the middle brightness might allow the viewer’s eye to explore the subject more fully. A rough hack at that is attached 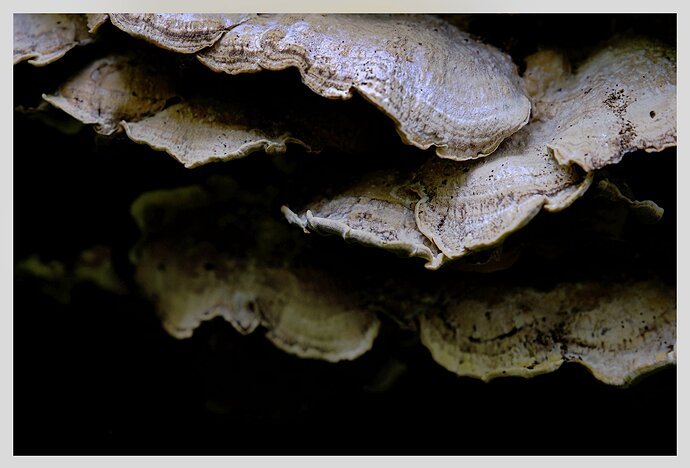 This is a nice take on Fungi. I do agree with @Bonnie_Lampley and would like more top than bottom. Beautiful work with the shadowed areas.
I had to chuckle about your wonderful “near north” description of where you were shooting. Near and north are very relative. Living in Michigan, our “Up North” is anything north of the Detroit Metropolitan area more than 2 1/2 hours.

I like how you you’ve kept the shadows dark and mysterious here Kerry. The high contrast works well for me.

@Bonnie_Lampley, @linda_mellor, @Igor_Doncov, @Dick_Knudson, @Alan_Kreyger, @Nathan_Klein: Thank you all for your feedback, much appreciated as always. Igor, though you might eat these fungi, i suspect it would be your last meal

In the end I did do a minor rework, taking down the brightness of the upper section a tad but I didn’t want to bring up the darker areas because I think that would obviate some of the mystery and depth of the image.