Sony A77II
Sony 70-400G @ 160mm, 20mm XT
ISO 200, 1/25 @ f11
The first image is a straight RAW capture of this unusually formed Gerbera. Chrissy was about to prune it since it seemed malformed but I prevailed upon her to spare it until I could get a few shots. A hundred or so later I came up with these and others that I was pleased with. The second and third images are from the creative mode menu on my A77. Comments on your preferences/likes/dislikes are most welcome. >=))> 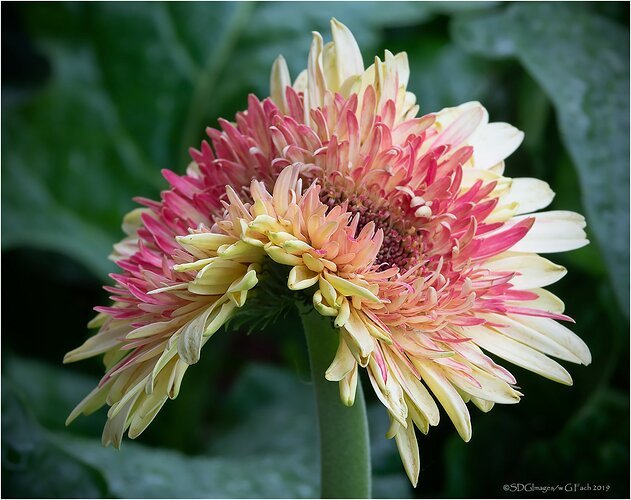 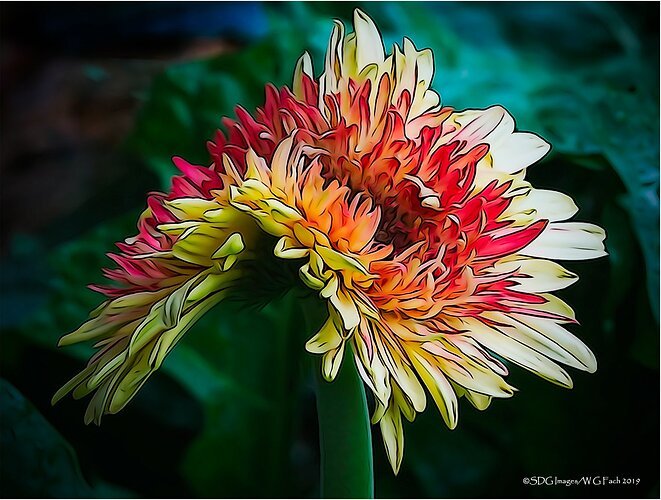 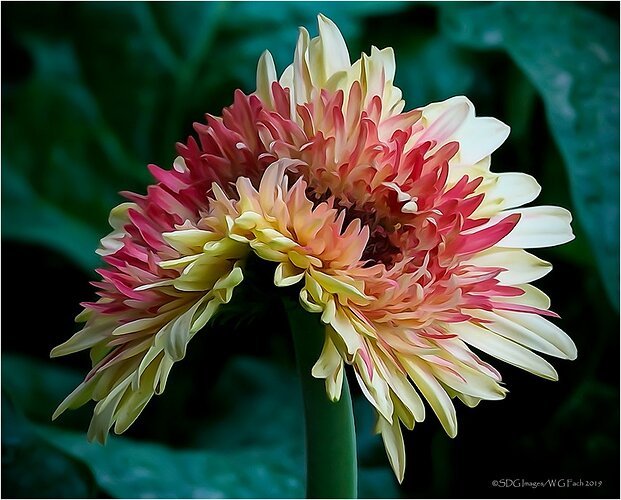 That is one “twisted sister” look of a Gerbera, Bill. I’m glad that you were able to talk Chrissie into letting you take a “few” shots of it first. I really like the llistration mode best of all, but just what it did on the flower, not the background so much. There seems to be at top (especially left) blue in it, drawing the eye out. If you were to use this one, I am thinking maybe some vignette would take care of that. Just a thought. All 3 though are very nice though.

Shirley: Good catch on the blue. The illustration mode can do some weird stuff to the BG as well as the main subject. I got rid of a lot of it in other areas but missed that one. This is already a pretty heavily vignette to dull the corners. >=))>

I’m glad that this did not end up on the cutting room floor, so to speak. It is very unusual looking.
I’m also glad to find someone else whose definition of “a few shots” is about a hundred

I like the color of the background best in the original shot, in the other two the greens got fairly cooler in tone. In terms of the look of the flower, in order of preference 1st choice - Watercolor, 2nd choice - Straight, 3rd choice - Illustration (looks too much like a cartoon for my taste). The Watercolor mode is actually pretty subtle, and it’s also interesting that it seems to have more effect on the details of the flower than the background. But it creates a nice painterly effect.

Bill,
I had to chuckle when I read that you wanted to get a couple of shots and a hundred or so later you were done. That sounds like so many of us.

Of the three my favorite is the watercolor as it obviously has a painterly effect; although it is subtle. I am glad you were able to come away with some images of this unusually shaped, but still lovely Gerbera.