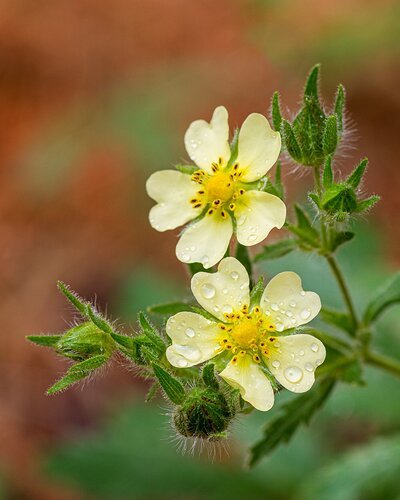 More Weed of the Week! I know, you were all holding your breath. Let it out.

Often found in pastures, fields, on roadsides, railroad tracks and other disturbed areas, this is technically an invasive species, but has been in North America so long it’s considered naturalized. It is Eurasian in origin. It grows in big, brushy masses that can be a couple of feet high. The plants live up to ten years and the seeds stay viable in the ground for up to three. It’s thought they can also withstand the digestive tract of white-tailed deer and thus be spread basically everywhere. Not much else eats it except the occasional rabbit because it is quite bitter and so it can be difficult to remove from cattle pasture because cows don’t like it. Pollinators of all kinds do though and so it’s become important to them.

It blooms pretty much all summer and I really like the pale yellow of the flowers and the contrast between their broad smoothness and the hairiness of the bracts. This photo came from my yard in NH after a rain.

Other than next time try stacking, I’m open to suggestions.

Is this a composite: No
Tripod and my legacy Olympus 90mm f/2 macro at f/8

Lr for all processing. The usual stuff including wb, sharpening & nr, texture & contrast. Can’t recall if I cropped much. Topaz Sharpen as well.

Hey Kris, what a nice specimen. I like the colors, and the background is wonderfully out of focus. While a Focus Stack might offer more sharpness of the flowers, the way it’s presented here is just fine for my viewing pleasure.

Super!! Wonderful specimen and light – water droplets are icing on the cake. DOF works for me here! I wonder about playing with hue/sat/selective color on the reds,to subdue them just a bit…

You do realize you have now committed to presenting us with a gorgeous weed every week!

Lol, I did get myself out of it with the first post @Diane_Miller - but even so I might run out of “weeds” and have to switch to Wildflower of the week.

Thanks @David_Bostock - it might have been a tad breezy too which kept me from closing down too much. Glad it works.

Kris: Have run across these a number of times but never got such a fine image. I like your DOF/POF choice and the BG looks great. Top notch image of a less than inspiring subject. >=))>

thanks @Bill_Fach - once you start looking, lots of weeds turn out to be pretty.