What Lies Beneath +repost, a new face... LOL 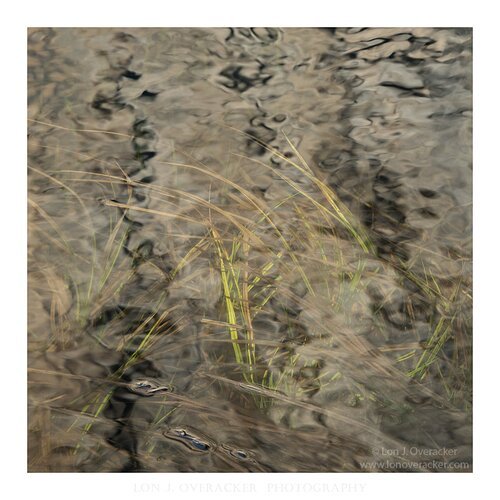 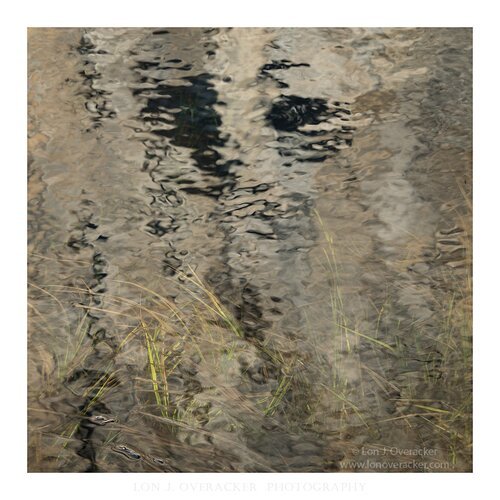 EDIT: After Eva’s comment about seeing faces… I just had to add this one. I purposefully cropped the original to avoid the alien, as that wasn’t my intended concept of the image. But then again, sometimes we get lucky with some pretty strange captures by sheer random happenstance. I dunno, maybe it’s me, but once I saw an alien… I can’t unsee it…

Thanks for looking and any comments!

… for lack of a better title. I think I’ve recycled this title in the past… Suggestions if you’re so inclined.

I think I’ll keep my comments to a minimum here and hopefully get comments and reactions without any influence. But for reference, of course this is a reflection on water - the Merced river and El Capitan, from my recent spring trip to the valley.

OH, and I want to thank @David_Kingham and NPN for providing the PS Action for adding a frame. Yeah, adding canvas to an image isn’t terribly difficult, but having the action available prompted me to give it a try. I added a little extra to the action as well…

Any and all comments, reactions to this image. Both processing and general reaction, impressions.

This is a wonderful abstract Lon. I like the title too especially since I can see several different faces in the reflection and ripples.

I think this is visually delicious. I guess it is the balanced composition of quietly kinetic elements that makes me savor this image. Vertical dark lines interact with the slanting lines of grasses. The bright, somewhat bland upper part is a quiet balance to the rest. The small bulk of vegetation(?) breaking the water’s surface at the bottom gives a foundation that somehow balances the top third.

This is simply gorgeous, and so well thought out! The layers are fascinating as they play against one another, and I was delighted when I discovered whatever it is breaking the surface at the bottom of the frame. 11/10!

Thank you to @dan_beaudreau , @Eva_McDermott , @Dick_Knudson and @Diane_Miller for taking the time to leave a comment. I’m glad to know that some have found this enjoyable - I was a bit unsure.

Eva - your comment about seeing little faces has forced my hand in posting the broader view… It’s also a square crop, but it’s closer to full frame in the sense that the top and bottom are the edges of the original horizontal capture. I’ll comment above.

Thank you again for the comments!

Yup… Now I can’t unsee the alien. Great image non-the-less Lon! I like your original.

Lon, I appreciate your original version a lot. The diverse diagonals lead me through the whole composition in an appealing way, thereby always keeping my attention within the frame. The brighter grasses near the center make for a nice focal point to my eye, while the patterns in the water add further interest. I also like your subtle treatment of colors an tonality.

PS: in the second version the darker parts at the top are rather distracting for me.

Love the title Lon. If you’ve used this title before then maybe “Watery Underworld” but I prefer “What Lies Beneath.”
I much prefer the original image but I LOVE the long, alien face in the second version. And yep, once you see an alien in an image, you can’t un-see it. I really like the light and shadow play you’ve captured in this Lon. The blurry, vertical black, squiggly lines, interplay nicely with light catching green grasses bending at various angles that show nice movement. I also like the small aliens, er, water bubbles in the LLC letting me know where the actual surface of the water is. tHis is also well composed. Nice job Lon!

What Lies Beneath - something I always appreciate. I like your crop, as the “alien” doesn’t work for me. I could see brightening it up a bit (simply for aesthetic reasons), but I don’t know what kind of mood you’re going for. Here’s my idea, FWIW. In any event - well seen! 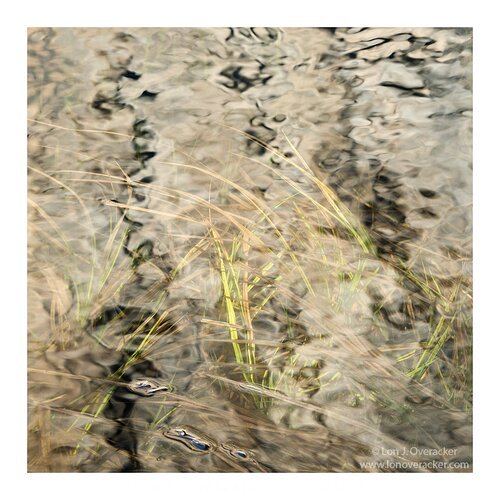 I guess I’m the only one that prefers the ‘alien’ image. I didn’t really see an alien and now that it’s brought up I just ignore it. No, the composition is more original and interesting with the combination of an upper area that’s different than that below. Yet they work together somehow. The image is less homogeneous than the cropped version because the reflections are more varied and richer. Just my opinion of course.

I don’t know what kind of mood you’re going for. Here’s my idea,

Actually not after a mood per se… but in recalling the moment(s), I’m on the shadowed side of the river, and close to the bank where it’s much darker - so if anything, the brighter rendition doesn’t reflect the experience. HOWEVER… I love your rendition! I think the brightness brings the two main elements (reflection and grasses) closer together - yet they are still clearly distinguishable, but now perhaps even more mysterious. Thanks for taking the time, I like it!

Now I have to admit. My original choice for a title was “Ode to Bonnie…” Seriously. I have been able to expand my own vision by learning from you, and others here on NPN… so thank you @Bonnie_Lampley !

so if anything, the brighter rendition doesn’t reflect the experience.

Well, we certainly have the tools these days to convey just about any experience/mood/idea we want. I think these kinds of low-contrast scenes can be processed to say all sorts of things.

I’m with Diane on those little rocks breaking the surface at the bottom - nice touch.

My original choice for a title was “Ode to Bonnie…”

We all learn from each other! I really value the advice I get on NPN.