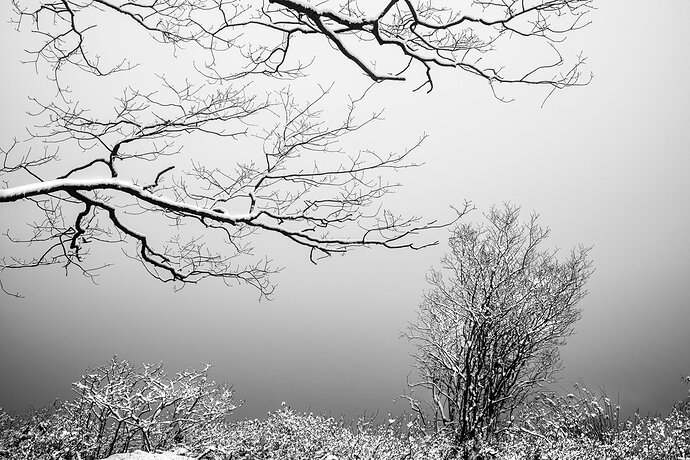 I really like your creation here. Thinking out of the box is always stimulating to see. A significant part of the appeal is actually the lighting. You likely know the suggestions that will be made: (1) greater separation of tree from branch (2) reorient the tree to be vertical rather than leaning. But the image itself is fascinating. Thank you.

Igor
Thank you for the feedback. I actully took out part of the branch actually touching the tree/bush, could have done more though.

Mario, I agree with @Igor_Doncov that the lighting here is the strongest appeal. The gradient of tones in the sky (dark bottom to bright top) is very well done. This lighting is similar to your other winter fog post, and it adds a nice mood in both shots. I think you have done some creative thinking here to see the concept of this image, as Igor said its outside the box, which is refreshing to see. And similar to your other recent posts, I think you have done a very good job with the processing, the image is very crisp and clean looking.

You also said in your first post that you have never received critique before coming here to NPN. This image is pretty good, but it has more potential than this if certain compositional issues had been addressed. The biggest issue is the near merger of the trees that Igor mentioned, it’s a distraction. By stepping a few paces to the right you could have avoided the problem, and the composition would be much better balanced. And often the difference between a good image and a great one are subtle changes. Examples here would be to perform border patrol to eliminate distractions along the frame edge. In the top center, it’s distracting the way the upside down V of the branch is being cut off. It’s a crop that looks accidental rather than deliberate. Learning to see and avoid small issues like this are the key to improving. NPN is critique is a good way to learn how to self identify these issues, which can often be addressed while shooting in the field.

This is excellent. I wouldn’t change a thing. It was mentioned that there should be more separation between the horizontal branch and bush, and that maybe the bush should be vertical. I love their positions the way they are. It’s as if the branch is reaching out to touch the bush, and the bush is trying to avoid being touched - it’s saying “leave me alone!”. If you wanted a bit more room around the bush, you could clone out a few of those little twigs on the left side nearest the tree; I could see that. Otherwise,

Mario, this is another nice image from this series. I really like the gradient in the background, it adds some subtle interest to the negative space rather than if it was just one tone back there.

Adding to @Ed_McGuirk’s comment about the edges, if this were mine, I would clone out the lone twig that comes in on the lower right edge, and also the curved lowest tree branch on the left.

Thank you Craig. I actually now have made those adjustments and I also like the image better.

First chance to welcome you to NPN! Glad to have you here!

Love this image! The b&w approach I think is key to the success and the “out of the box” result Igor spoke of. The juxtaposition of the primary tree branches and the smaller bush and ground anchor create a very pleasing and engaging tension.

Of course as mentioned, that background light/fog really allows all this to happen. Aside from the mentioned very close merge of the branches… you might consider cloning/mitigating the bright patch of snow along the bottom left edge. Very minor, but just a point of what I like to call “border patrol.”