This winter has been pitiful in CA. The Sierra snow pack is well below normal for this time of year and the long range forecast is looking dry. I captured this image in early December after one of the few decent storms of the season cleared and the cottonwood trees still clung to their leaves. 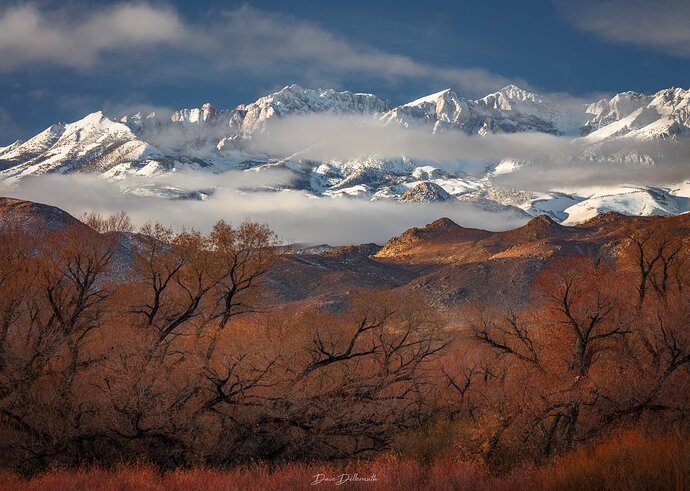 This has a very autumn feel to me due to the glowing foreground, but you write it’s taken in early December. It seems to be a strange year indeed in many countries.
With the leaves still there this turned out really beautiful, with that winter-backdrop! Nice layering, I like the dark branches in the fg and the layer of clouds in front of and above the mountains add so much mood.

Ah, what a beautiful composition, Dave. The cloud clearing adds a lot to the image and I really like how the light hits the snow. Perhaps the overall scene could be brighter? I did a quick M4-L5 mask to lift up the exposure and it seems to make the trees and the blue part of the sky more pleasing.

The Sierra snow pack is well below normal for this time of year and the long range forecast is looking dry.

I was skiing in Mammoth just last week and boy it was 60 degrees and there are patches of rock already visible on the slope. On the positive side, I am hoping for an early backpacking season.

Beautiful, Dave. Once again, the reds look a bit hot to my eye, but very much a personal preference. Otherwise, processing looks spot on and the image looks great.

The blue red colour combo works for me on this one

Despite the lack luster winter you still have a fine image here. I really like the composition, the colors balance it well. I might darken the shadows slightly in the red hills but that’s just a personal preference. Great work.

This is a real treat - the play of the black branches across the fg interacts beautifully with the jagged peaks in the distance. The hues and tones throughout are a delight.

Exceptional image there, Dave One of your best IMHO. I love the combo of warm and cool tones.

Excellent color, detail, contrast, and clouds. While I like it as is, I would like to see it a tiny bit brighter but with a tad less saturation in the oranges.

Boy you caught some nice stuff on this trip; again I like the interesting effect the clouds add. You have very nice layers in this one. I’m a sucker for saturation, but I too think the balance would be better with the red/orange dropped a tad.

Awesome stuff here, Dave. I love the layering in this scene and the clouds seem to be lifting a veil as they give you a peak of the snow capped mountains in the BG. The interplay of light and shadow also works very nicely for this image. I could see the FG brought up just a tad, but that is just a personal preference as this is lovely as is. BTW, the combination of warm and cool tones also works rather nicely.

Just gorgeous Dave. The snow covered range with the low-lying clouds are just so striking - all else is just icing on the cake. The gap in the late autumn trees reveals the early, warm light striking the foothills beautifully.

If I had a wish - it would be more either more, or none, of the reds at the bottom. Actually, want to see just a bit more so it doesn’t feel ever so slightly clipped. But that’s a pretty small nit.

Cracking picture Dave love the clouds passing between the snow clad peaks over bronze and gold.

I agree that the orange is a bit too strong and the color seems unnatural. The other issue is that it’s half one color and half the other with not much of either mixed in with the other. Each half is really good though: the branches in one and the mist in the other. They just don’t seem well integrated somehow.