At least for the Canon R5 and 100-500 + 2X RF. The sharpest test subject I could find was a business card printed on semigloss stock. I taped it to a piece of cardboard and propped it flat against a wall and put the camera on a tripod with the lens at the same height so I was shooting square to the subject. I shot it filling the frame sideways with 500 + 2X, 500 bare and 254mm – the widest I could go before hitting the close focus limit. 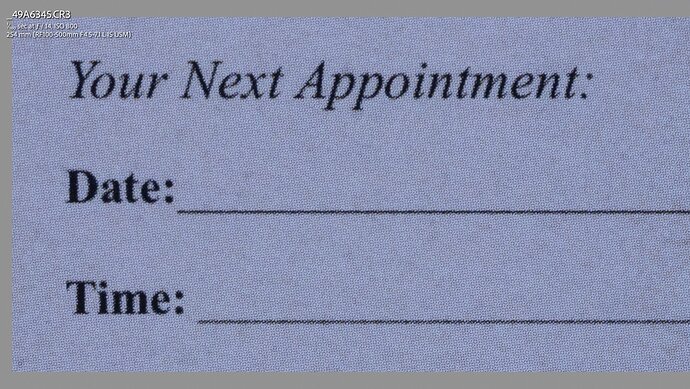 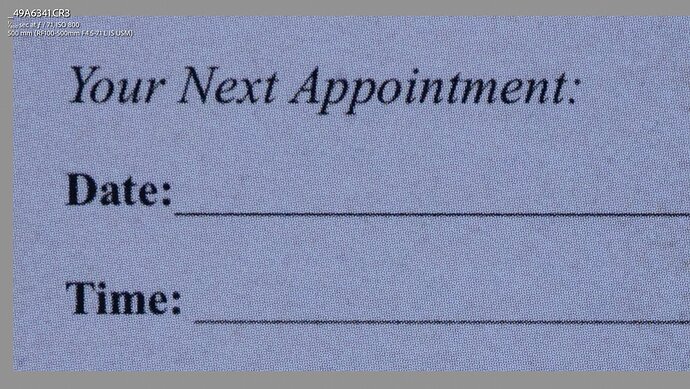 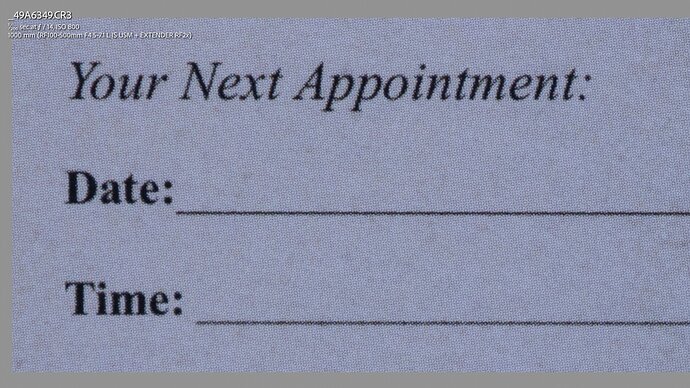 Not exactly optical bench results but a reasonable real world idea. No adjustments made except the crop, made on one and copied to the others, then screen shots (at 100%) done for convenience. The width shown is 1.5". There is a slight softening with the 2X and some loss of contrast, and a slight warm cast. None of that is surprising for a TC.

Of course the printed text is not tack sharp, but the offset press dots that give the card a BG color are a good comparison.

Just for fun I’ve layered the 500 and the 1000 shots, with the 1000 as the top one and as a smart object, so I could do some minor correction to match. All I did was a slight color tweak, to a few notches less yellow and a tiny move to less magenta, then Clarity to +15 for some micro-contrast. No sharpening except the default in raw conversion on either. The dividing line for the two layers is from the “m” in Time up through the “p” in Appointment. The color correction isn’t perfect but could be tweaked a bit more. The two are pretty darn close for image quality.

When I moved the tripod back to shoot the same size with the 2X, there was a slight rotation which I didn’t correct as that would be messing with pixels. Click the picture to zoom in to 100%.

My comment on 2x converters on your Sparrow shot was based on what others have said, as I’ve never used a 2x converter, but your results suggests it works just fine in the wild. I can tell a difference between your test subjects, but even at 1000 mm the result seems acceptable.

But, as a friend of mine says, you wouldn’t tell an excellent chef she must have great pots and pans, and the same goes for photography-it’s photographic skill and not the equipment that makes the shot. Still, I’m tempted to get better ‘pots and pans.’

The thing about it’s not the equipment is a well, maybe, sometimes. I think in photography, art and craft are very dependent on each other, but certainly that is to varying degrees depending on the image. Better equipment also lets you get more as well as better shots.

And I think that applies to a considerable degree to cooking, too… It matters how evenly a good sauce pan will heat, or the ability of a well-seasoned heavy cast iron griddle to quickly sear a flank steak to seal in the flavor and juices and have a wonderful pink center.