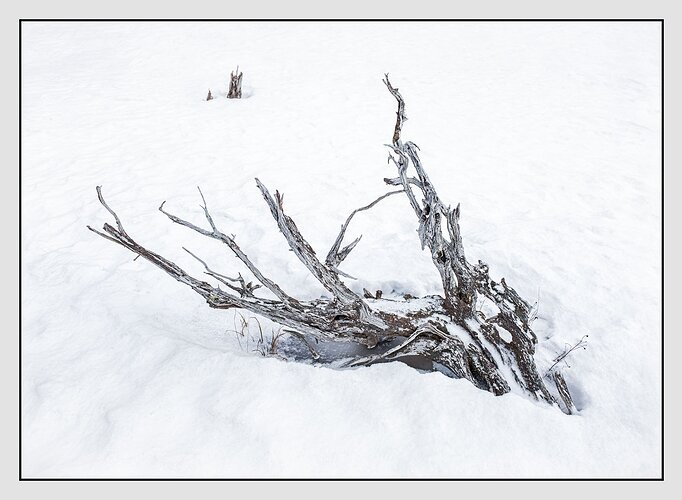 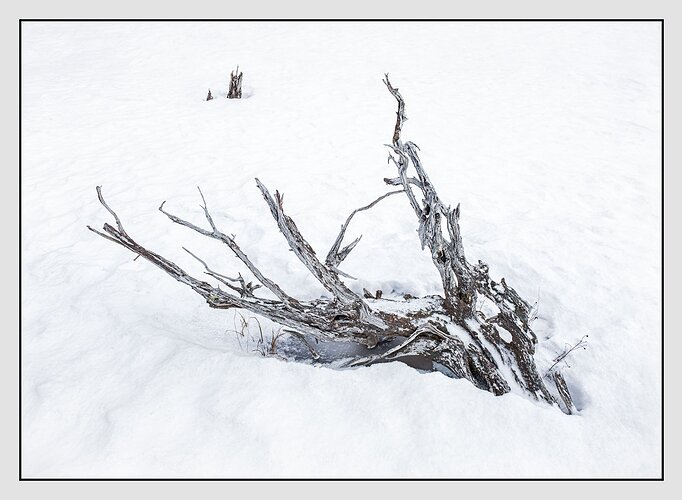 Here is yet another in the Beaver Pond Sculpture series. I suspect there will be at least some criticism around the small stump – that it is a “distraction”. I’m open to hearing it and even reconsidering my choice but here’s my thought process around it. The main subject of this image is obviously the roots and trunk protruding diagonally from the ice and snow. And even though I love the way it seems to mimic a deer’s skull, the trunk and root aren’t really what this image is meant to be about, at least for me. What it’s about is its dynamic thrust as it opens in a “v” moving from lower right to the upper left of the frame. It’s about the way the roots open outward in an embrace – but of what? Partly it is the space – the wintery pond itself. But to just leave that space open-ended felt like a deflating balloon – it lacks definition and tension. That is what, in my view, the small stump adds to the frame – first of all a relationship between the “arms reaching out” and something to receive them and be embraced by them and, second of all, there is a tension – between large and small, far and near - and then finally, the small stump serves to contain and define the space that the widening branches begin to suggest. So, is the stump a distraction? A big part of the answer may be the readers commitment to the image. If that commitment is 15 or 20 seconds then, yes, it may feel like a distraction because it adds something unexpected by introducing a relationship that may well raise more questions than answers and, perhaps even a degree of mild discomfort. But my hope would be that some reader, somewhere, would want to take a longer look and maybe reflect on or be affected by the image. Then maybe the stump isn’t a distraction but a reason to stick around. Anyway, that’s my story and I’m sticking to it (for the time being, at least!

I can tell you right away my eyes went straight to the small stump after a couple of seconds on the main subject, but then they got back to it. So, to me, yes it is a distraction but not a major one, it is balanced and makes you wonder up and down on the image.
The image itself is very graphical, very minimal and harsh. I like it the way it is, i would change a bit.

Love this one;
I think it’s actually my favorite from this series.

The small stump is obviously not a distraction - actually even before reading your “manifesto” I notice the importance of the small stump on the compositions - but, and there is always a “but”, being out of focus, is a bit of concern for me. That was my main “nit” on this photo, now that you mention it… you putt all the pressure on that small stump.

I just go back to what I just said;
Love this one. It’s my favorite.

@joaoquintela Thanks for your very enthusiastic response. Much appreciated! Perhaps, I chickened out in the end. The little stump was fully in focus and I worried that it might be too competitive with the main show so, I lowered the contrast and added a bit of blur. I have posted a revised copy above with the clarity restored. Do you prefer it like that?
@joao_ferrao Thanks for your feedback. That the small stump holds your eye in the frame is a positive and I’m glad to hear it works for you.

The revision works better for me as it looks deliberate…even without your cogent explanation of why you shot this the way you did, I’d know it was. When it was blurry I wondered if you were justifying after the fact that you didn’t get it in focus. I should have known. This series is a very considered undertaking and has a specific intent and style.

The little stump in its sharp state adds give and take to the image. Yes, most of the visual interest is in the big stump (that does, creepily, look like a deer skull), but eyes get drawn to the small one and it’s like an echo. I like it and it works. Bravo!

I actually like the stump Kerry and this is before reading the ins and outs of why you included the small stump. To me, the stump could actually be the base of this tree top before it toppled over. It almost looks like it’s yearning to get back to where it belongs. The stump makes me stop and think. Without the stump, this is just an image of a downed branch with no reference to size and really no meaning. The branch would have to carry all of the intent of the image and I wouldn’t know what that intent was. With the stump, the viewer can make this image into whatever story they want to fashion from it.
I hope this all makes sense Kerry. This is my favorite in the series.

I too think this is the best of the series. I find the branch to be very expressive. It’s like the protruded hands of an artist. Could be a dancer. Could be an actor. The direction and perspective that this is shot is what conveys the emotion. I neither like nor dislike the small stump. I can see this as a fine image without it. I get the theoretical relationship between the two but I don’t feel it very strongly. So my vote goes for the outstretched branch by itself.

It’s hard for me to say that this my favorite of the series, the others worked very well too, but this one is right up near the top. The dynamic V-shape is the reason for this ranking so high. My vote is that the stump is not a distraction, in fact, I 100% agree with your composition self-analysis in your image discussion, to me the stump is additive for the reasons you mentioned. The V-shape makes me think of out stretched arms reaching to the tiny stump in the ULC, which creates a nice foreground/background relationship.

The little stump makes this for me. It feels like a parent and child conversation. The revised version is the better of the two.

Hi Kerry. I really like this image and the additional punch that the revised version has. I agree with you that without the stump the image would lack the visual tension that it provides. I immediately saw an outstretched hand straining to touch the little stump. Great shot!