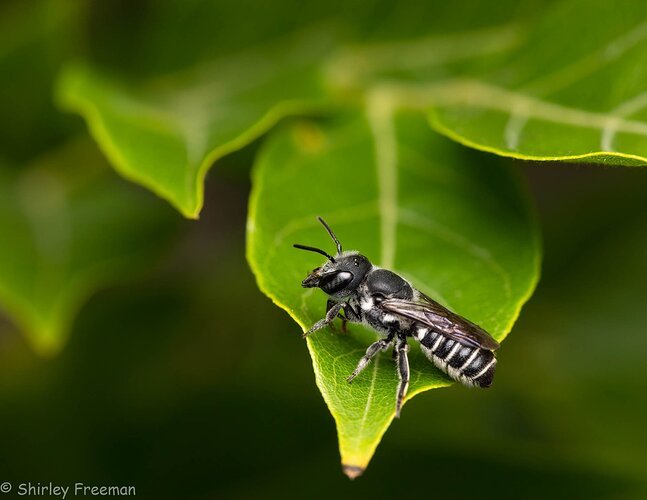 I’m not sure if this is a bee or some kind of wasp. I found him on our wisteria bush today.

What a gorgeous little creature. No doubt newly hatched given how every hair is perfect. I don’t have my bee book with me so I can’t give you an ID, but most likely it’s a female. Almost every bee and ant you see is female. That’s how the hive works - the queen lays eggs that won’t be fed or nurtured to become queens and so they become workers. She lays a few that will become drones (males) and will be pampered until called upon to mate. Some stay, some fly off chasing a new queen that has been allowed to hatch and to survive to split the hive when it gets too large. Of course that’s for hive bees only, but solitary bees are female dominant, too. This looks to be a solitary of some type. Cute as anything and your light is to die for - you even got her multi-prismatic eyes to catch the light a little bit.

Thank you, Kris. That’s a lot of good info on bees. I appreciate that. I don’t think I had ever seen one this color before. I think it was a bit smaller than a honeybee.

Thanks @Shirley_Freeman - bees are a fascination for me. I am trying to encourage our native polinators in all their forms and found some green metallic sweat bees in my yard last year. They were nesting on the same stump - each female digs a hole by chewing through the rotting wood and laying her eggs inside. Hopefully a cuckoo wasp or ichneumon wasp doesn’t hitch a ride. The latter though prefers beetle larvae for their own larvae to feed on. It’s crazy out there.

Your light set up is dialed in perfectly, btw. Brava!

Hi Shirley. This is such an awesome capture! I’m not a macro shooter so all the techs are a bit beyond me, but the detail is awesome as are the colors. Well done. BTW, I downloaded your photo and dropped it into iNaturalist to see if I could ID it. Pretty sure it’s an Alfalfa Leafcutter Bee (Megachile rotundata). A European bee that has been introduced to various regions around the world. As a solitary bee species, it does not build colonies or store honey, but is a very efficient pollinator of alfalfa, carrots, other vegetables, and some fruits. Because of this, farmers often use M. rotundata as a pollination aid by distributing M. rotundata prepupae around their crops.[2] Each female constructs and provisions her own nest, which is built in old trees or log tunnels.[3] Being a leafcutter bee, these nests are lined with cut leaves.[4] These bees feed on pollen and nectar and display sexual dimorphism. This species has been known to bite and sting, but it poses no overall danger unless it is threatened or harmed, and its sting has been described as half as painful as a honey bee’s.[5]

Wow, thank you Terry! I appreciate that. That probably explains me not remembering ever seeing one like it. Thank you for your compliments too.

Shirley, as said, you have the lighting under great control. I love the way the leaves offset the insect too. And the focus on the bee is spot-on. Super macro!

Shirley, the details in the bee are spectacular. I also like how the brighter leaf edges add some eye movement to the viewing and frame the bee.