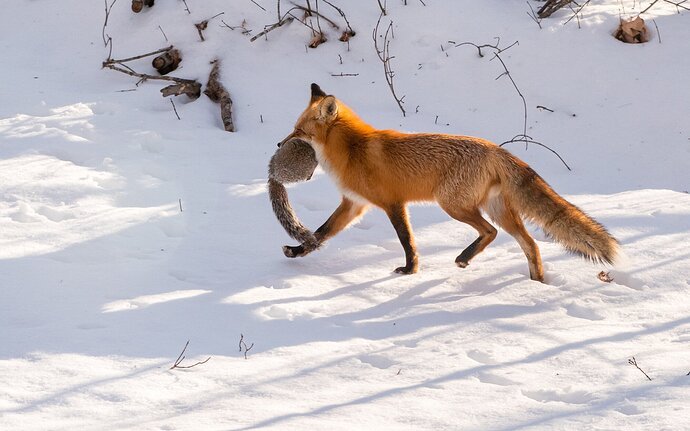 So one morning while coffee was brewing, I looked out the side yard and saw an orange ball of fur on top of the snow. It was one of our resident foxes. S/he woke up, stretched, yawned and looked around. I shot the whole time and have some not so fantastic shots because of a lot of small trees and bushes in the way, but they show what s/he was doing. Anyway, in about two minutes s/he went from sleeping to stalking. As fast as lightning s/he was on this squirrel. Unfortunately it was mostly behind my deck and I had to shoot through the window and the railings, but there was a lot of grabbing, shaking and waiting. Then more grabbing and shaking. No chances with being injured, not this fox. After a few minutes the rodent was dead or at least incapacitated enough for breakfast to be carried off with a flourish. To be enjoyed in private. It’s wild kingdom out there.

Well it was a little difficult to shoot, but have at any suggestions.

Handheld without coffee and through the window. 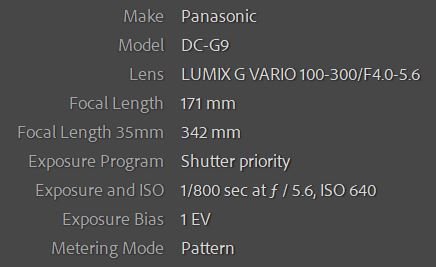 Lr for the initial processing for all the usual tonal adjustments and a crop. Some highlight reduction and texture and clarity. Added a little sharpening and nr and then into Topaz Sharpen to bring out more detail.

Great - you caught the motion without blur, and the determined eye of the fox. Its colour is really striking against the snow. I’ve heard that squirrels are tasty!

Nice shot in difficult conditions. Always nice to catch a red fox against a snowy environment. I need to send my foxes to take lessons from yours on the art of squirrel-catching!

Thanks @Mike_Friel & @terryb - it was a little tough having to shoot from inside, but at least I got some images that work pretty well. The bargain Panasonic 100-300mm did pretty well for these. I had no idea that foxes only den when they have kits, otherwise they ‘sleep rough’ as the Brits say.

) I like the color and detail of the fox against the snow. Well done!

Great shot! I wish that I had such a show in my garden. Squirrels are regular visitors, but there are few foxes to fear (maybe they prefer the chickens in the garden opposite to my house?) and snow is almost as rare as a fox.
Without your comments, I wouldn’t have noticed that you shot through a window. The fur is beautiful against the snow and you avoided most of the distracting items. I love it.

Thanks @Steve_Kennedy & @Han_Schutten - some years are better for snow than others. Sometimes when squirrels get into the bird food I think of it as feeding up the food chain instead of “stealing”. We have so many raptors, mustelids, foxes, coyotes and other predators that a healthy rodent population is a must.

WOW! Excellent shot of a gorgeous creature, with the perfect moment in stride! Nothing I would change here!

I never see foxes here except at night on one of the security cameras. Your windows are a lot cleaner than mine.

Nice to have a National Geographic Moment right in your back yard. I think that you did very well capturing this scene. I like that you can see the winter fur between the toes of the fox. I like this as presented. Well done…Jim

Thanks @Diane_Miller & @Jim_Zablotny - it was a pretty amazing experience. Almost as cool as being breathed on by a northern right whale. Even though it ended with the death of another creature, the whole scene was fascinating and, as we all know, this is how nature works.