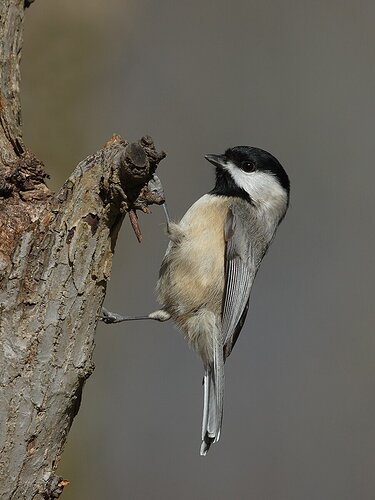 Probably our most common backyard visitor. Attracted to a tree with bark butter.

I like the pose this one struck on the tree nob.

I like the pose this one struck on the tree nob.

I really like it too.
I like how the left leg is holding its weight while the right leg is keeping its body kicked out from the tree and posing with its tail in an almost perfect vertical position.
Really neat looking song birds.
Great pose for sure and nicely captured!

I have some common feeders with sunflower seeds in them and the birds always treat it as first come first serve, all others wait their turn

I want to try some bark butter so I can get a few shots without the feeders.

I hope to get a few decent shots of some nuthatches we have, the cardinals are starting to show up but only one or two bluebirds so far

@Merv thanks for the comments Merv! The bark butter in this image is on the opposite side of the tree nob so it won’t show in the photograph.

Thanks Allen, I like that the butter isn’t showing in the image and that’s what I want to try to do with my own.
I was just curious about the bird’s behavior by perching at a spot where the butter isn’t

In other words, is the Chickadee waiting for other birds to move away from the butter or is it just hanging out? (Pun intended)

@Merv Hi Merv, the bird is just hanging out. Not waiting on other birds. Chickadees usually don’t feed from that spot so maybe he is just getting oriented.

Cool, thank you for the clarification!
Don’t mean to be a pest, just trying to learn the behavior.

It could that the Chickadee is doing its very best to give you some really cool poses!

I really appreciate you taking time to respond.

Very nice Allen! The background is a great compliment to a chickadee. I also love the textures that you captured in the bird and the trunk. Chickadees are my most common visitor as well and I strive to get something as good as this!

Everything looks spot on to me, Allen. All the techs are there and it appears you did some really nice work in the processing. A beautiful image. BTW, I just bought an R7 yesterday, along with the RF 100-500mm Telephoto Zoom. Starting the learning curve today!

Hi Allen, this is really nice. The background is nicely soft and helps to set off the bird. I feel the whole image could use a boost in brightness some…could be my monitor. I would also take a small dodge brush and brighten up the eye.

I really like this one, however your Nuthatch image was fantastic as well.

@terryb congrats on your new gear Terry! Sounds like a great combo. Hopefully we can learn from each other on using the R7 more and more.

A nice perch and the background colors work well with the chickadee. It’s a nice pose and there is just enough head turn so the eye appears to be looking at the viewer. Well done. What is bark butter?

What is bark butter?

Allen, bark butter is a type of spreadable suet that will stick to tree trunks, branches, etc. I buy mine from Wild Birds Unlimited but other folks make their own.

Another nice image from your hand; love the species and overall image. It is a little dark and I wonder of the cheek color is true to the bird, or that it should/could be a bit whiter (instead of grayish white as it is now). I ask, since I do not know the species but most European ‘equivalents’ have pretty white cheeks. Either way, love the image ! Cheers, Hans