Second attempt at processing, which came out a little cleaner with NR first then careful sharpening with overdone areas masked out at 50% opacity and some BG cleanup around the head: 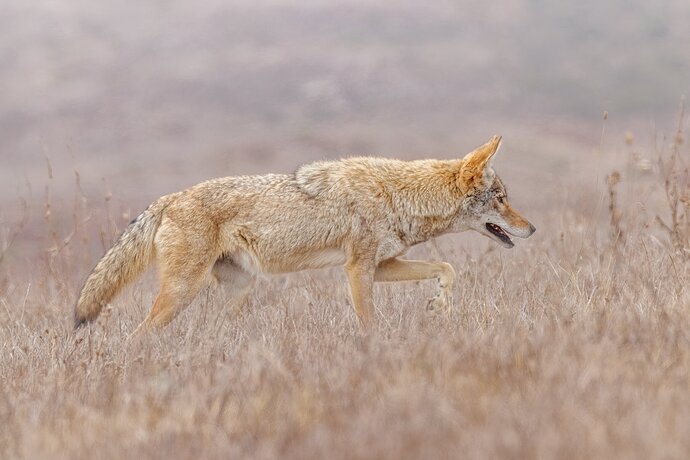 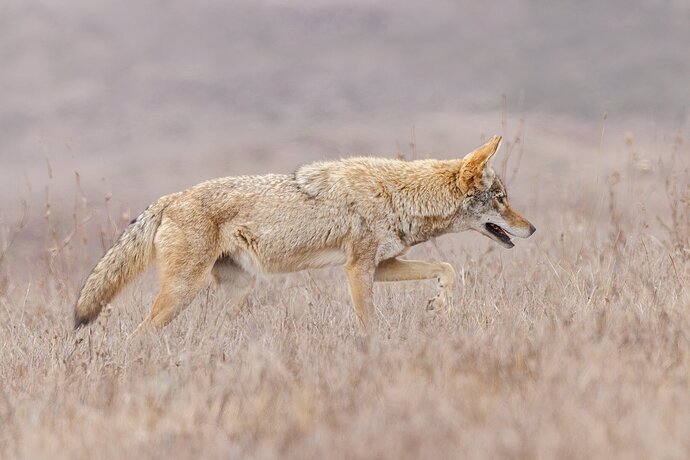 Literally four minutes after shooting the Quail I just posted, this guy loped across the road in front of me and into a pasture, and started trotting back toward me parallel to the road. I stopped maybe halfway off the road and since he was on the right I was able to get out and move to the back of the car. No time for a tripod. Had to climb the slight embankment to get a clear shot but he was busy looking around and I got several shots before he headed off. (Thought for a minute he was going to pounce on something, but he didn’t.) I think I saw 6 coyotes in the first 2 days.

Wow what a day! Thank goodness for fence posts even if they are of the rickety variety. Am a most vivid shade of green at the mo. I really like the pose with the paw raised and the mouth open. All senses on alert and intent in that stance. And check out that color adaptation - coyotes are such great hiders. Looks like the critical sharpness is spread out on different parts of the beast and looks a bit odd when viewed large, but small it isn’t noticeable. Probably a result of being so far away from it. Really fabulous.

Thanks @Kris_Smith, and good eye – it wasn’t very noisy so I skipped Denoise and went to Topaz Sharpen to see what it would do. It gave some inconsistency in the fur and I didn’t do my usual low opacity masking of oversharpened areas. Will revisit it soon. Need to prune the grass growing out of his forehead, too. It shows the bad bokeh of that lens with the 2X, although in-focus areas are very sharp. Coastal air can create a mess with thermal mixing and fog had just cleared and it was warming up fast.

Well, the pose is awesome and the tonal finish is fantastic. Really nice shot of this guy. What an adaptive species coyotes are!

Very cool capture. Did you look at reducing the brightness a bit, and increasing the contrast some?

Thanks @terryb and @Dave_Douglass. I went back to the raw file and managed a slightly cleaner processing – posted above. The contrast actually came out a little lower here – the light was still hazy after fog had cleared and it looked too harsh with higher contrast. Might have lowered Exposure a bit, though.

Great subject and wonderful pose here, the open mouth and raised paw really adds to the image !
@Diane_Miller you are getting real good sharpness with RF 100-500 mm with 2X converter. I must admit that I have never dared to use any converter with 100-500 lens.

@JRajput, Thanks!! Definitely try it!! It is very sharp with even the 2X! The biggest problem is the air quality, with thermal distortion from heat and moisture as you are farther from a subject, but I think it’s better than cropping. Some day I should shoot a test target in bad conditions with the 600 f/4 and the 100-500 + 2X and also 1.4X at 600. I think adding the 2X causes some degradation of bokeh – in the original meaning of the quality of OOF areas – but maybe what I’ve seen is just due to thermal mixing. Very small branches or grass stalks, even though OOF, look like there is a sort of ghost image where there are two stalks. It seems very strange. I should look into it further. It seems strange because the lens, with or without the TCs, is very sharp.

Even with the amount I can crop with 44 MP, I usually can’t get close enough to animals and I love being able to shoot at 600-1000mm with the 2X. (You can’t go wider because of the geometry of the TCs – the lens can’t move below the 300mm position on the barrel with either one.)

And I just saw this guy got an EP! Many thanks, @JRajput! I was so delighted he gave me a chance to shoot him! This is the first decent chance I’ve had to shoot a Coyote.

Very cool image, Diane. The rework that takes care of the vegetation coming out of the head and back make a huge difference. That’s one healthy looking Coyote! You guys sure had a great trip!! Wish I could have come with you. Hopefully next year. You might try to remove the brush in front of the coyote just in front of his nose as it is very prominent on the right edge of the frame. If it looked more like the brush at the rear of the coyote I think it would look just fine but it’s too dark the way it sits and this image is so good that it’s worth taking the time to work on those stick ups on the right edge. Well done, Diane!!!

Thanks, @David_Haynes – that scrub got darker in the RP and I hadn’t noticed it. Now that you mention it, I can’t unsee it! I won’t do another post but heading to the master file right now for some low-opacity cloning.

I hope another get-together out there can happen, with whomever would be interested. Definitely not in tourist season, though. The roads are too narrow and the opportunities too sudden and irresistible.

…Second attempt at processing, which came out a little cleaner with NR first then careful sharpening with overdone areas masked out at 50% opacity and some BG cleanup around the head:Technical DetailsFull frame. Some global tonal tweaks in LR and removed a few small pieces of scraggly grass in PS. Hand held leaning on a very wobbly fence post.

Love the warmth in your second attempt!

Diane, a great pose and nice clean surroundings for this subject. I didn’t mind the temp on the first one, but the repost does look a bit more natural, I suppose. Congrats on the EP!