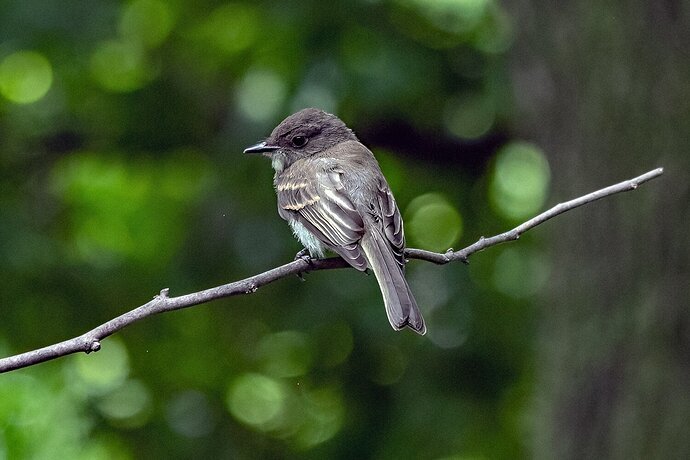 A member of the Tyrant Flycatcher family, the Eastern Phoebe is a somewhat common neotropical migrant here in eastern Oklahoma. I was shooting video with the camera on a tripod when this guy landed on this perch. I quickly switched to Av mode, and picked tripod and all up to get this shot.

Great shot, Terry. Just one question; how do you manage to get these birds to hold still? Our birds never seem to lite long enough! Nicely done.

Thanks @linda_mellor. It takes a lot of training, starting when they’re very young…

Pleasing image here Terry. I really like the background. Nice detail, color, and head turn. I think I might crop it just to the end of the treetrunk so that the bird is not so centered.

Very nice, Terry. I usually have to aim straight up on this kind of bird. Nice to see an eye level image.

Thanks @David_Schoen. I think you’re right it would benefit from a different crop.

Thanks @Dennis_Plank. You know how it is - right place, right time. This little one sat for a couple minutes on that branch.

Hi Terry
I am glad you have convinced the local bird union to allow early pose devilment. There are only two thing I would work on in this shot, cropping off some of the right side in this frame and cloning out the tree white pixels. Always say I planed it this way…
Peter

Awesome training Terry. And they’re following your directions to the tee. I would crop some off the right side of the image as @David_Bostock mentioned so it’s not so centered. Maybe a new class for the birds on where to position themselves. LOL
Nice head turn and a good look at the back of this little bird.

Thanks @peter. My plan was to sit in the blind hoping something would come close that I could photograph. Does that count as a “plan”?

Thanks @David_Haynes. You train them and train them, and still…These birds these days…
Sounds like the crop is a universal critique.

Hi
If it works it does.
Peter

A cutie! I can see that you wanted to include the end of the stick, but I’d vote for the crop also. It would be possible to prune the branch artistically.

The suggested will strengthen the comp and the pose is perfect. You have trained this one well. The BG has some nice bokeh and adds to the charm of this photo. You may want to tone down the highlights in the wing as my only other suggestion. Otherwise, I like this photo…Jim