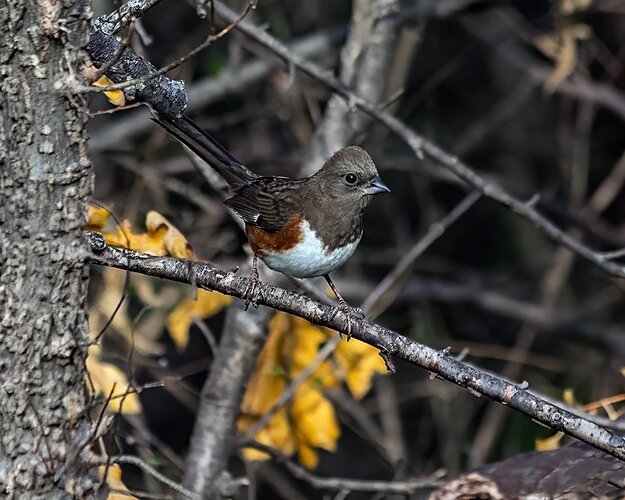 A first sighting for me, this one was utilizing the brush piles I’ve built on the back side of my property. Cornell’s description reads: “A strikingly marked, oversized sparrow of the East, feathered in bold black and warm reddish-browns – if you can get a clear look at it.” He (I believe this is a male) didn’t make it easy.

Nice habitat shot of the towhee. I don’t know about the eastern variety, but the spotted towhee out west loves our feeders.

According to everything I’ve read, the Eastern Towhee will come to feeders, as well, @Allen_Brooks . But I have yet to see one at a feeder.

Very good, Terry. I do get out Spotted Towhees coming to dove mix on the ground now and then but they are very skittish. I have a lot better luck with water in the summer. They can really get into a bath and provide lots of good shots. You do need good cover approaching the bath and they seem to like it at or very near ground level.

Thanks, Dennis. The Thrush’s I get (Swainson’s and Gray-cheeked) also like water at or near ground level, and cover nearby, both of which I’m set up to provide, so perhaps I’ll get a Towhee or two next spring. I’ll be especially vigilant now that I know they’re around.

Nice Towhee image, Terry, the catch light in the eye really sells this image for me. Looks like it just jumped up and is on alert, and ready to go. I have a hard time getting the Spotted Towhee to hold still when I see them in the woods .

Thanks, Stephen. This guy was on the move, too. I saw flashes of that white breast among the brush piles, working his way toward me, so I just waited on him, hoping to get a decent opportunity. If he had landed anywhere but on that limb, I would probably not have had a shot. He only stayed there long enough to get off one frame. A bit of luck is always helpful.

Nice capture in a natural-looking setting. I like the alert look.