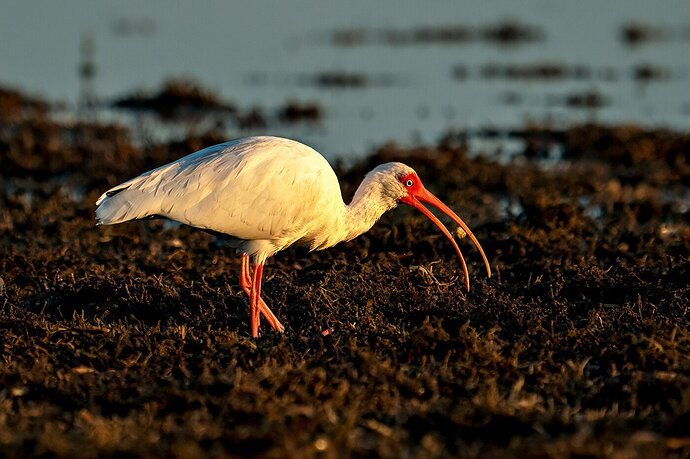 A bite of breakfast in the early morning light today at Green Key, New Port Richey, FL. The White Ibis is so common in Florida that it is sometimes called the “Florida chicken!” I went out to Green Key at dawn and at low tide. I sat on a low rock, propped my lens on my knee and photographed a small group of White Ibis foraging in the wrack. It looks to me like this lucky bird found a snail, though I’m not entirely sure.

Do you think there’s too much contrast? Should I have lightened the background, though it is as photographed here?

The action is good with this - it does look like a snail. The feathers appear a bit over exposed and bright in some places, so you might try bringing that down a bit. Direct sun like this is often an issue. Eye looks reasonably crisp and the whole of the head appears to follow the focus plane which is a bonus. Looks like a little chromatic aberration along the upper edge. Depending on what sw you use to process, you can remove or minimize this. All in all though it’s a restful shot of a busy bird.

Nice light on the ibis. The contrast works for me; I like how the ibis stands out from the background. I could see cropping some of the oof foreground. Very nice action shot.

Nice action but I’d vote for lowering the contrast enough to take care of the blown highlights and blocked up blacks. That can be done with midtone contrast kept high enough to give some pop to the subject.

Nice shot and bonus to get the ibis have a bite. i like the contrast as it gives the photo an early morning feel but there are some blown out whites on top of bird. Might be a good suggestion from Diane and worth a try.

I like the pose and the food in the beak. That said, I think you really need to work on the exposure with respect to the blown highlights and black plumage. I also think you could cut the orange saturation a bit.