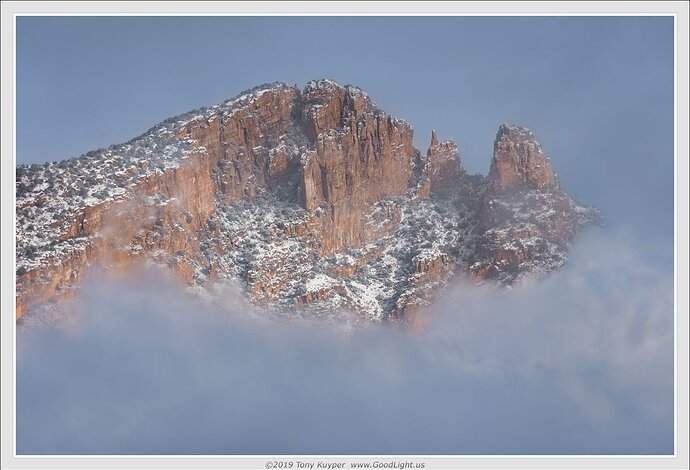 Been struggling with this image for a few days. Wanted to make a soft light, soft contrast, soft color image because that’s what this was when it was taken. Trouble is, I usually make strong contrast, strong color images, so it turned out to be harder than I thought to pull back from that style. I tried this in monochrome and didn’t like that either. I like the simple elements but maybe the light just isn’t with me on this one.

Really, any recommendations would be helpful at this point.

I don’t know, Tony, you’re far more skilled than I at manipulating tonal values, bu I like the rock about as it is. Have you considered playing with the foreground cloud? Nothing extreme, but something more toward the cheerful end of the spectrum?

Tony, this to me looks like it would very challenging to post process without having a seesaw approach. Hard to say what might be the best look overall. It becomes a personal taste thing. Meaning you did an excellent job with the very soft lighting and obscured view through the fog here. With that said it works very well IMO…

Tony, you say you have been struggling with this. Which aspect of this image are you still unhappy with?

Soft images do best with soft subjects. This one fits the bill but a gentler, even more ambiguous scene would likely work better with this treatment. I would try lightening up the fog in the lower left area. Perhaps go more high key with the sky as well.

Well I’ve noticed that most images on NPN do not explore the softer side of image making. IMO it is much more challenging to make/create these images. Everything is much more fragile because working in high end midtones without contrast framing your ever move takes a slight hand. I call them feminine images, so I was kinda surprised to see this one come up. Kudos for going outside your normal and for recognizing and sensing that you were in new territory in your post processing illusion.

Great image, wish I could have been there when you made the click… 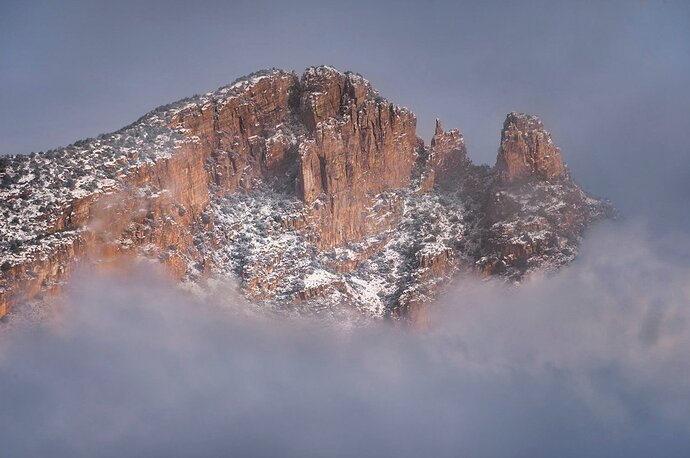 Well Tony, Mother Nature sure put on a nice show for you folks in Tucson, how fortunate you were to have stuff like this to work with. I think you used an appropriate amount of contrast restraint to retain the soft feeling here. Many others would have taken this further down the contrast road, but I really like it a lot as presented. I like the contrast and color in the clouds and sky as presented, I wouldn’t go any cooler.

As @Ed_Fritz pointed out you are dealing with a delicate balance here, and I think you succeeded. I think these type of images sometimes translate better as prints than web display, but with that said, I think you pulled this one off very nicely, even for web display.

I am more with you, Tony. This one is missing a little something for me. I have played with it a few times. I just don’t think this one is well suited for a soft contrast presentation. I used a gradient mask on the sky and pulled down the mids in a simple curve and it works nicely for me. My take anyway. Cheers.

Thanks for the recommendations. I’m liking the added warmth in the clouds and rock in FitzImages’ redo. I had actually gone this direction for the rock but pulled it back when it seemed to contrast too much with the clouds. Looks like the key might be taking the clouds warmer along with the rock (but will also need to avoid warming the snow). I can also appreciate that some added texture in the foreground clouds might be useful as well.

Soft and low contrast images still need some directional light. Here the light seems too flat. While it is possible to add punch to flat light to make it more dramatic, going the other way doesn’t usually pan out. I think that is the problem you are running into with this one,Tony.

Wanted to make a soft light, soft contrast, soft color image because that’s what this was when it was taken.

Well, there ya go. I think you’ve accomplished what you set out to do Tony. Having said that, I like the treatment of the snow covered formation from Fritz. However, I would keep your clouds/fog. Perhaps just something as simple as some added micro contrast to rock? Then again, from this processing I get more of the sense that we’re look “through” a thin veil of fog - which naturally would reduce contrast, right? The evidence of fog completely surrounds the rock, so it make sense the air just isn’t that clear between you and the rock.

Of course you could take this in many directions. I happen to enjoy this tremendously.

What about going more high-key with it to emphasize the soft/low-contrast/airy feel you’re looking for? This would work perfectly with the swirling clouds, I think. I feel the original here is a bit dull/dim. Something like this? Just took it into ACR filter and raised exposure a fair amount, also cooled down the white balance a bit. Then tugged down on a curve through a mids3 mask from your panel back in PS to prevent it from washing out too hard. Sorry for the crop, I just wanted to see a histogram without the white border. 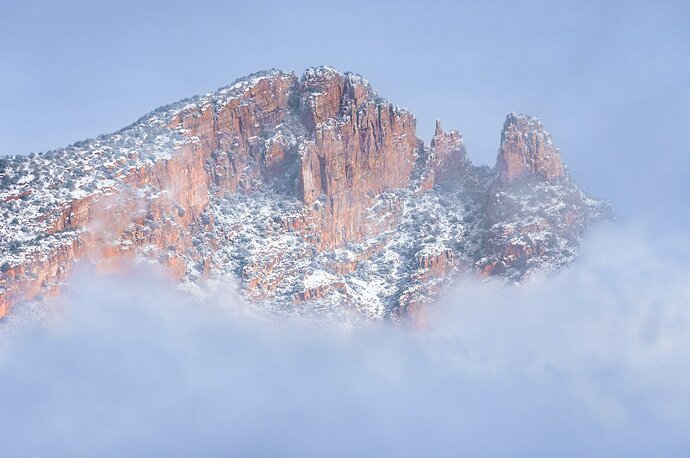